Booster Gold and himself.

@Tournadosoup yeah I totally get you. After I asked this question I read the Batman #50 and then questioned all of my ships again lmao

@Kristj yeh I getcha. I haven’t read the old young justice but I see what you mean and I can get behind a superboy Tim ship any day.

Boostle. It might as well be canon at this point.

The only thing I “ship” Batman with is Justice and vengeance.

I’m probably the only one that ships superbat here.

@Bluewolfeevee
I second that, same with Fire and Ice.

Also, in YJ continuity, a Bart Allen/Jaime Reyes relationship would be great.

We’ve been teased with a little bit of Jessica Cruz/Starfire in Justice League Odyssey, and I’d like to see that happen.

@mellengirl00 you are not alone! 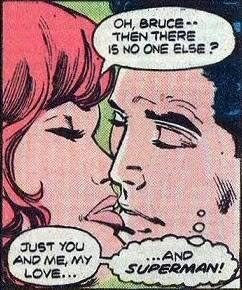 My OTP is my first ever real ship from when I was younger, Spitfire from Young Justice

Danny the planet and Mogo.

Always rooting for Diana and Bruce they teased the heck out of use in JL and JLU! I love Hawkgirl but I do feel she should be with Hawkman. The Starfire vs. Batgirl one is hard to make a choice. My heart and mind says Babs but the passionate savage in me says Starfire!

Oh and Superman should be with Lana if not WW I don’t like Lois!

Omg thank you for mentioning JL and JLU. THEY TOTALLY TEASED IT. But I personally just don’t like hawkman and hawkgirl together bcs I personally think you can have more than one soul mate. (Not like at one time but you catch my drift

I’ve never been much of a shipper, but if I had to pick an actual OTP, it would have to be Big Barda and Mister Miracle. I couldn’t possibly imagine either of them paired with anyone else.

Honorable mentions:
Wally West and Linda Park. Flash stories have often (not universally, but often) been about the power of love, and Mark Waid in particular really made me believe that these two would move heaven and earth for each other.

Barbara Gordon and Dick Grayson. Mostly, they’re (respectively) my third and second favorite DC heroes, so I’m predisposed to liking interactions between them. I never found Starfire interesting because she doesn’t have much personality beyond being Dick’s love interest. Babs does her own thing, so neither of them really feels like the subordinate character in the relationship.

Batman and Catwoman. There’s an intriguing symmetry to this one. Selina represents that there’s something both dangerous and alluring about Bruce’s mission, while Bruce represents Selina’s conscience, tying her down from actually being as amoral as she wants the rest of the world to think she is. Not that I didn’t like the dynamic between Diana and Bruce in JL(U), but it doesn’t feel quite as meaningful. Plus, the fact that Batman stories tend to be gritty, “street-level” stuff centered on one location while Wonder Woman stories are mythic, globe-trotting affairs means that it’s hard for the two of them to share stories outside the context of the JLA.

Yeah I can see what you mean. I mean I’ll always love starr and robin together cus I grew up with teen titans

but I’m fine with Dick and Barbara too