Share Your Ideas for the Weekly & Monthly Fan Art Challenge

Pitch: DC Fan Grrl International
A weekly spotlight on Women’s Voice in DC Comics. Both audience and creators share their love of all things DC Universe.

I have a logo for it.

Oooh I am so here for heros doing the mundane

Fan art for a specific show or cartoon? It could be in one’s own style or the show’s, for example one week Super Friends and another week Teen Titans. It could also be a screenshot redraw of them.

A few ideas I had while working today:

You guys are awesome- keep them coming! Just to note, I’ve got July already laid out (and I did make room for flash, thanks to @TheRealDetectiveChimp), but I’ll be sure to put these into action starting in August!

I just had another idea while replying in another area! Heroes or villains in full on Anime Mode? Would that be allowed as long as we keep them in current or past uniforms?

I believe so, yes!

Draw with opposite hand and really now that I think about it…if @Viciousdark, @Z-A-C, & a handful of others could just always draw with their less dominate hand or even feet so my stuff looks better would be great!

Lol that made me think of this; a media challenge, where you try to use a new mediums to make art in. Like if you normally use colored pencils trying a drawing app or sculpture, something new and outside of your usual comfort zone

that sound great! I just ordered some monster clay and super sculpey so I can get make some statues. Messed around with clay in my teens but haven’t since and looking forward to giving it another go.

, I usually don’t use my left hand for drawing tho and never used my feet 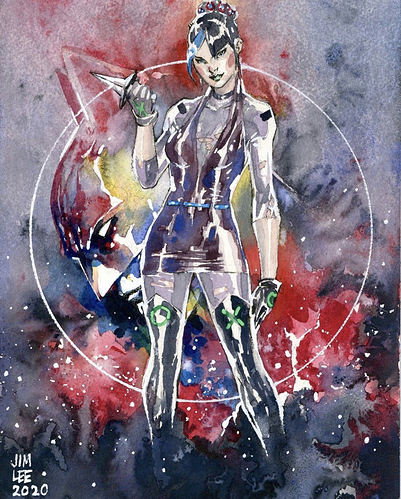 On a similar note, it could be fun to design superheroes/villains teenage bedrooms!

And I agree that the team challenge was an incredibly good challenge and more of those would be great!

reminded me of this for some reason

If there is ever a halloween one we could have heros wearing another’s costume like Wonder Woman wearing Power Girls Costume.

Unfortunately that’s against the Fan art guidelines “2. Do NOT create any new characters, or design new costumes or logos for existing characters, or combine existing characters (e.g. no mashups or crossovers).”, because it would be a mash up, but if we could that would be a great idea. I think a loophole could be doing preexisting mashups published by dc. Such as Batman and swamp thing

Flash 80 anniversery is in July, Also if you make it a monthly challenge I call Wally rebirth

Heyas! Can you confirm the date for me? I just saw a bunch of articles saying the anniversary was back in January, with the special issue out in March.