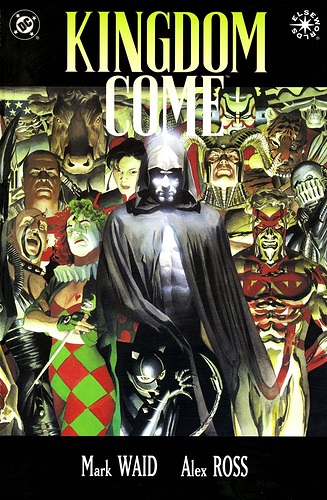 Two years ago, a colleague introduced me at a promotional event for the Harley Quinn animated series to writer and frequent unofficial “ambassador of comics” Jimmy Palmiotti. To break the ice, she described me to him as the DC website and community’s resident trivia expert and knowledge-keeper.

It was easily the nicest thing anyone has ever said about me. But I had no choice but to deny it immediately. Because there is nobody alive in this world who knows or loves DC Comics as much as Mark Waid. He’s the man who has literally written the book on DC’s greatest heroes several times over. He’s the man who turned Wally West into the Fastest Man alive. The man who gave the Justice League and Superman definitive origins, and both their stories a definitive end. The man who rekindled the multiverse, and never, ever gave up on the rallying cry of “Long live the Legion.” And just as I knew all that, I knew that one day, Mark Waid couldn’t help but come back to the universe he gave so much of himself to shape.

To learn more about Mark Waid, head over to DC Comics!

Have you checked out Batman/Superman: World’s Finest #1 yet? Let us know your thoughts in the comments!

Great article. I knew Waid was big deal, but I had only read Kingdom Come and Superman: Birthright, both of which I thought were fantastic. This gives me some more stuff to check out when I have the time. Thank you!

Regarding my thoughts on the first issue of World’s Finest, I’m going to link to this post, where I just finished jotting them down (beware spoilers):

So turns out this week’s issues were made available to me at midnight eastern time, so 9pm here in California. I don’t recall this being the case before the Amazon switcheroo, so at least one good thing came out of that. So I read it, and it’s quite good! The art by Dan Mora is fantastic. Very dynamic and detailed, even in the smaller panels. The issue is basically non-stop action, and it all plays out like watching a movie on the big screen. The classic costumes haven’t looked this good i…

Waid’s name on a comic means a real pro has written it. His LoS with Kitson is fantastic