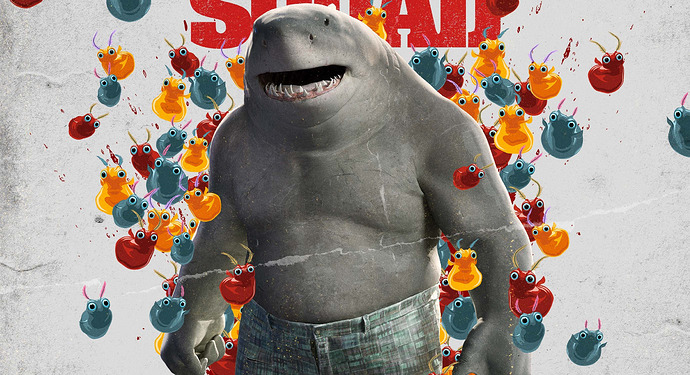 Lots of people are talking about sharks this week, which got us thinking about King Shark. After all, the big guy’s walked away with every trailer we’ve seen from James Gunn’s The Suicide Squad and that’s to say nothing about his scene-stealing role in HBO Max’s Harley Quinn.

Now, we’re hardly marine biologists here at DCComics.com, but it’s been well-documented by the brightest scholars and taxonomists of the DC Universe that King Shark is, unsurprisingly, a shark. But is he…the only shark in the DCU? Not by a fathom. Here are seven sharks you may find in your favorite DC comics who are not King Shark. In fact, it is possible that they’re not even sharks at all…

Warren White is the worst person you’ll ever meet. An embezzling white-collar criminal, Warren got transferred to Arkham on a technicality and then cornered the underworld through pretty boring, but extremely insidious financial acumen. Why does he look like that? He got mauled by Killer Croc and then got frostbite when he was locked in Mister Freeze’s cell during a riot. But hey, you gotta look like a monster to make it anywhere in Gotham’s underworld.

But Is He a Shark?: I mean, metaphorically speaking. Like, the way Wall Street is run by sharks. And he has the teeth. I say we count it.

To see the remaining 6 “Sharks” on this list, head over to DC Comics!

Who’s your favorite DC Shark? Let us know in the comments below!

Hey, I wrote this one

I am excited to read this! I found out a few days ago that there are least five more DC shark characters than I thought there were. Now I really want an event where they all face off against each other, only to unite to fight their true enemy, Aquaman. (Possible titles: Panic Under the Sea, Sharkageddon, or Multisharkity.)
There are many events I’d like to see that will never, ever happen.

Reading the title made me think you wrote this, I was right!

Good to know I have an identifiable style.

Not by a fathom.

Great job, and appropriately timed, with info on some characters, I had forgotten about.