I have posted on this before but I am wondering how others feel about it. Are secret identities important anymore? What I loved about Batman in particular was the urban legend, mysterious part of his mythology. He was feared and even gave allies the creeps. I have no problem with the Bat-Family and no problem with him being humanized but I feel like he’s totally lost that aspect. It used to be a way of helping him stand next to gods.
I don’t care for the Superman storyline either but I quit those books so I’m not as invested.
I’ve been thinking who knows about Bruce and decided to make a list. Some may be false memory and some may be retconned or it was never said if that continued in New 52. Some of these make sense or I at least accept but overall it’s too much.
I strongly object to Joker.
Joker, Lex Luthor, Riddler, Hush, Two-Face, Catwoman, Ra’s Al Ghul, Talia, Hugo Strange, Bane, Lex Luthor, The Designer, Karma, Lady Shiva, Deathstroke, Amanda Waller, Raptor, The Court of Owls, The Colony, Spyral, Ventriloquist, Poison Ivy.
Some have enough info. Penguin knows Jason Todd. The world knew Dick Grayson and I’m not sure how that impacted Bruce when that was erased. Anyone with Google could have connected Bruce and Dick.
Most of Bane’s team in Tom King’s run either knew or had more than enough info to figure it out. Punchline and The Underbroker must know.
Plus characters who obviously know like omniscient ones or the Metal characters (duh, they are him) but those I don’t complain about because duh.
And I bet there are more.
In most Justice League stories they call each other by first name in public.

I don’t mind Hush or Riddler knowing who Batman is, as his identity was central to the Hush arc and character.

Ra’s Al Ghul knowing is fine too. He’d never go for long without discovering the identity of a masked opponent who can stand toe to toe with him, and strike his daughter’s fancy.

Joker OTOH…that’s hit and miss. I can buy him figuring it out, but then again, I think he’d want to keep the mystery alive and not ever want to know who’s beneath the cowl.

Overall, for some characters secret identities can still matter, it just depends on the character. Hal Jordan doesn’t give a damn who knows he’s a GL (he should probably ditch the domino mask), but for the lesser-known heroes, such as Sideways and Young Justice (among others) their identities are much more important to them and those they care for.

I agree. Some make sense and some would lose credibility if they couldn’t figure it out.
I think I would rather the world knows Tim Drake as his secret identity instead of “Drake”. Ugh. I add that to my other post about reboots. Tim Drake must be a Robin again. 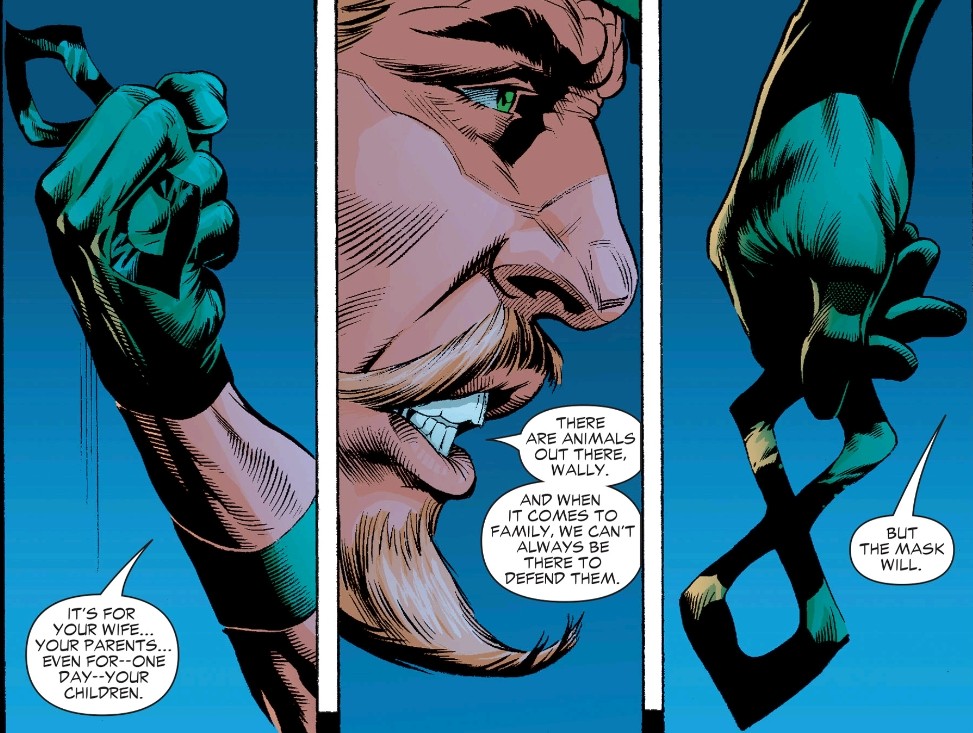 Ya know, I dig the current Young Justice series but…Drake does have to go. I’d be fine with Tim going back to Red Robin.

Of course, if Tim took up Robin (which would be a first in current continuity), that’d probably piss off Damian, and lead to some fun shenanigans between them.

Tim (as Robin) to Damian: “A Robin that smells says what?”

A minor gripe I have with comic books in general, is how easy it seems it would be in real life to see through the so called disguise. I chuckled a bit when I read “but the mask will” while he’s holding that dinky little thing. Suspension of disbelief is not difficult for me (otherwise reading comic books would be very hard). So not a big deal, but I admit there’s some silliness to the whole thing.

I can go either way with secret identities. Whatever makes for an entertaining story. I get the whole protect your loved ones concept, but in many cases, said loved ones are always getting in trouble anyway. In some cases, I feel it would make sense if people knew who the loved ones are. I think most would think twice before messing with Superman’s or Batman’s people, offering a certain level of built-in protection.

Either way, I don’t feel too strongly about it… whatever works

Gotta say, I’ve always wanted the JL to make a sort of space city next to the watchtower for every leaguer’s loved ones if their identity is public or is revealed. Sort of a “super witness protection program”. Use every trick in the bag to build it/secure it, like the Dibney’s place was made in Identity Crisis. Use Kryptonian tech, Martian tech, Thanagarian tech, Atom’s tech, Steel’s tech, consult with Mr. Miracle for security, have Dr. Fate and Zatanna set up warding spells around the whole place, take turns rotating out one of Earth’s 42 Green Lantern’s to actively monitor it.

I like that idea for the freedom it gives our heroes to not spend half their energy just covering their identity plus if they have any super kids, they’d get to grow up in a place where they didn’t have to feel isolated and having to hide themselves.

Sooo… send 'em all to an isolated space city so our heroes can roam free in the world? Doesn’t sound fair to the loved ones

Another thing, I may have sounded like I veer a bit against secret identities up there. I don’t. Actually one thing I enjoy about the concept, storytelling wise, is that it allows for exploring different facets/sides of the characters. How they filter themselves in certain situations can not only be entertaining, but revealing of certain aspects of their personalities. There’s Smallville Clark Kent, Metropolis Clark Kent, Kal-El and Superman. I don’t usually think of him as exclusively one or the other but an amalgamation of all the above.

Just for the one’s who are public or identities are revealed and it wouldn’t be a prison. A simple glamour charm or holographic image inducer and they can teleport down whenever or wherever they want without Luthorcorp facial recognition tracking them.

I’ve always been in favor of them when they’re done right.
Flash kept his secret from everyone including Iris so that the rogues wouldn’t go after her. The only rogue who knew it was Reverse Flash and he was after Iris partly because it messed with Barry but also because he wanted Iris for himself.
Superman on the other hand kept his secret identity but only had the relationship with Lois AS Superman! Which of course made her a target! Plus to add insult to injury he always said he couldn’t marry her because THAT would put her in danger! The logic is so completely backwards It’s as if Bizarro was calling the shots!

You would think the “world’s greatest detective” could do a better job when it comes to protecting his identity? And I know I have stated this elsewhere on this app, but it bears repeating: Clark just put a giant bullseye on the Kent farm when he stupidly revealed his secret identity to the world. “I need to tell the world the whole “truth” about MYself.” Really, Clark, at the possible expense of your parents’ well-being? Sounds kind of selfish to me.

My own thought is that secret identities are still important. The rationale behind them is that superheroes wanted to protect the ones they love from reprisals from their enemies. Here I have to add that in the case of heroes who are a bit looser in their adherence to the law a secret identity would help them avoid prosecution (I hate to think how many assault charges could be racked up against Batman, for example). The problem is that I think it has been made far too easy for anyone to figure out a hero’s secret identity. As it is, modern day technology would make keeping one’s identity secret hard enough. I have often thought about someone would keep their identity secret given security cameras, et. al.

Whenever a superhero stops using his/her secret identity. Like living at home, keeping their job, paying taxes, etc. They become less human in a metaphorical sense. Like if Superman stopped being Clark. It’s scary. The secret identity is their humanity.

I’ve never been a fan, myself.

On one hand, they’re almost all shoddy. Writers actually tried to explain that Clark’s glasses are hypnotic, at one point, and the idea that villains would just dismiss that Superman’s secret identity wouldn’t have the same personality as Superman after seeing photographic evidence is hilariously dumb. Likewise, Ra’s al Ghul made it clear that Batman left a paper trail when building the cave, which means that anybody willing to spend an afternoon down at the county clerk’s office or who has gone to a bar with a local construction worker knows. And they’re the flagship characters! And as you point out, the writers are so embarrassed by the codenames, that nobody bothers to use them.

But on the other hand, the secret identities are explicitly to avoid accountability. The shorthand is “to protect my loved ones,” but nobody Superman captures would ever actually get convicted, because (absent some seriously corrupt legal wrangling) Superman isn’t giving his legal testimony in court, and any evidence Batman provided doesn’t have a clean chain of custody and would be torn apart by the defense. And their loved ones are always in danger, anyway, because the heroes are all stupid enough to have the same friends in both identities.

Then over on the after-market third hand (it’s a thing!), it makes our “heroes” dishonest and petty, not just lying by omission that they have multiple identities, but outright misdirecting and gaslighting their friends and family to protect their big secret. And they act like their friends, family, and assets are more deserving of protection than anybody else’s, which…isn’t great.

They’re a standard trope of the genre that isn’t going away any time soon, of course, but it’s harder and harder to suspend disbelief in a world where everything is tracked and we’re justifiably more skeptical of vigilantism in general.

I believe Superman actually did testify in court in the Manhunter 2004 series.

I love when Superman shows WW that a simple pair of glasses masks their identity. So simple & probably the best disguise in the DCU. Of course the slumping, clumsy act helps him too. But the glasses, genius imho.

Christopher Reeve does it wonderfully here:

So simple, yet so defining.

I believe Superman actually did testify in court in the Manhunter 2004 series.

Sorry about the lack of clarity, there. I meant “isn’t testifying” as in “there’s no legal way for that to work on an ongoing basis that doesn’t undermine the objectivity of the courts.” You’re right that they show it. But in any realistic legal system, it would never work, because of that lack of accountability. It might be possible, if he has some special arrangement with the government, but that smells of corruption, if they can clear someone to testify whenever they please without revealing their identity.

Speaking of the lack of accountability, there’s a huge, recurring, in-story problem with secret identities that should make them undesirable: Impersonation. It would be difficult to frame me–as an ordinary citizen with a face–for murder, because someone wanting to make me look bad would need to work around any alibis I might have and leave evidence that credibly links me to the crime.

But to frame Batman for murder just requires a costume and a public murder. If the security cameras and face recognition can’t identify who’s under the real cowl, we can’t see that it’s an impersonator. And Batman’s alibis fall into the range of “hiding in a cave looking at crime scene photos,” “breaking and entering in some high-tech office,” “beating people up,” and “definitely not hosting a charity gala across town, because that was Bruce Wayne.”