Script I wrote for Denny O Neil in 2009 evening class at NYU.

Thanks for sharing this, Turok.

Do you remember what kind of feedback you got?

Denny gave us a sample script to the five of us. It was one of his Superman stories.

He explained that the script occurred after he wrote several short story ideas to pitch to editor Julie Schwartz.

Julie accepted this short plot and discussed what him further details .

Then he wrote the script

We all submitted three ideas. Denny said all of my three were acceptable.

It was the last class when we submitted our scripts.

Denny said he was would give us an analysis of our script by email.

Denny was in his seventies at the time and he never emailed us before, nor did he give us his email.

I don’t know why he didn’t respond.

Thanks for sharing this

NYU probably gave him an email for the duration of the class and cut it off too soon. I have heard of this happening with guest lecturers. Can we assume that O’Neil DID NOT teach the use of a lot movie camera angles?

I wish I could meet Denny. I have one special book for him to sign.

@TurokSonofStone1950 That was great! I posted a script thread and art thread for a comic I am making. If you have the time could you check out the script thread?

You are probably right about the email lapsing. Denny was teaching us to be professional. He woud not be unprofessional himself.

Denny suggested many books on film in the second class, but they were very high level, on three act structure etc.

Denny summarized each class in Bleeding Cool. The end of my Learn to write Fan Fiction Class contains links to each class.

I will bump up that thread for easier availabilty.

Shot by Shot by Steven Katz

Setting up your Shot by Jeremy
Vineyard

Most detailed screen writing books describe camera angle as the territory of Director or Cinematograper, not the screen writer. At best they are annoying. At worst, they will cause the script to be thrown out.

I think Denny would say that is the concern of the artist. He only lists some of the terms in a few lines in his book, The DC Comics to Writing Comics. He calls Shot ‘more an aesthetic/ storyteling term’ and that’s it.

Another idea that Denny stressed, which is also in his book, is Suprise vs Suspense, using Hitchcock, the example being a book under the table. If the reader knows, that is suspense. In thrillers the reader knows more than the heroes. In detective stories, they know less than the detective, until the end.

He stressed working on plot ideas before doing a script, in collaboration with the editor. He had us submit three possible plot ideas. One of the books he recomends, Saving the Cat by Blake Synder describes how to do that on your own. Otherwise, you may waste weeks on something that wont sell.

Both he, and Devin Grayson in a separate class list the obvious beginnners’ mistake of asking the the artist to draw two or more actions in a single panel.

I will look at your work.

It is a separate thread, right?

Bomb under the table, not book.

@Turok Sorry for the late reply. I saw you gave me some direction on my art thread. Thank you. I replied back. The above link is my script thread.

@Turok Thank you for your help. That book you mentioned is basically my life right now. Poor social skills and I can’t remember a majority of my past. Minus the whole ending!

I had the therapy situation because I knew I would do flashbacks. I along with my character experienced ECT and Insomnia so I thought it would make sense. Thanks again.

You are most welcome

@Turok Is it possible get an IT job without a degree?
I used to have a CCNA and Network+ when I was 20.
Does it matter if you only attended one semester of college, but got all A’s? I withdrew to pursue the CCNA and Network+, but I then experienced mental problems.
I was in NHS and the top twelve percent in my graduating class of 600 in High School.
I have only had one job for a little over a year as a cashier at a military installation where I was nominated and won some awards (Employee of the Year).
I understand if I am crossing a boundary.
I just need a good paying job with great health benefits before I turn 26.
Here is some screenshots of an app I made in Android Studio. It’s for reframing cognitive distortions. 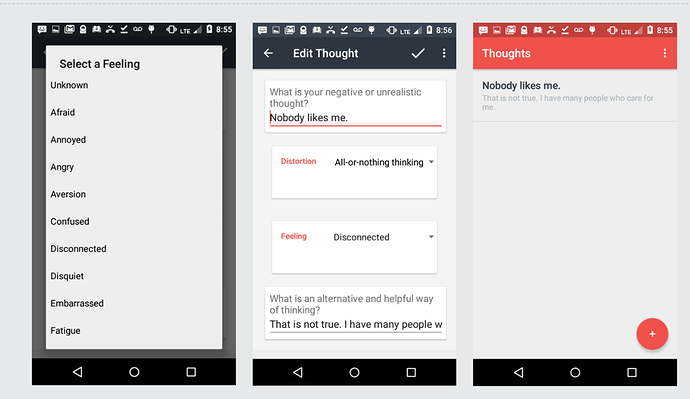 @Turok you can disregard that. Thank you for answering!

The problem will be how you can handle long hours and great stress.

There are schools that generate front and back end programming, like Flatiron, in New York. For those with no Computer Science knowledge. There is a lot of prework

Most of what you learn in college has no relevance in real job. You may need a great deal of Data Structure and Algorithms knowledge for interviewing.

It is your portfolio and web site, softare you know well and interviewing prowess that will get you the job.

Keeping it is how you react to stress and ambiguity, as there is no holding hands eriod. It is sink or swim.

Your medical history may cause red flags for the first job.

@Turok Thank you. I am in the process of dealing with stress better. My previous job (Government) had a thorough background report. That job was very mentally (Veterans who cursed and physically harassed employees ) and physically stressful (8-9 hour work days of physical labor followed by 4-6 hour commute). Resigned due to back pain. I was always good in Math and Science in High School where I won awards for my academic performance in Physics, Algebra I/II, Biology and Chemistry. I made several websites in High School from scratch (HTML/CSS). Last time I sank. I was not prepared when I was 20. I am more prepared now. I’m learning communication skills from audio books and taking online courses. Thank you very much!

@Turok I could make up some excuse right now about the art thread I made in Random. I apologize if this negatively affected you in any way. I understand you not wanting to ever communicate with me again. Have a good rest of the time on the forums. I mean that sincerely.