Rumors Persist Of Gal Gadot Appearing As Wonder Woman In 'Shazam! Fury Of The Gods' 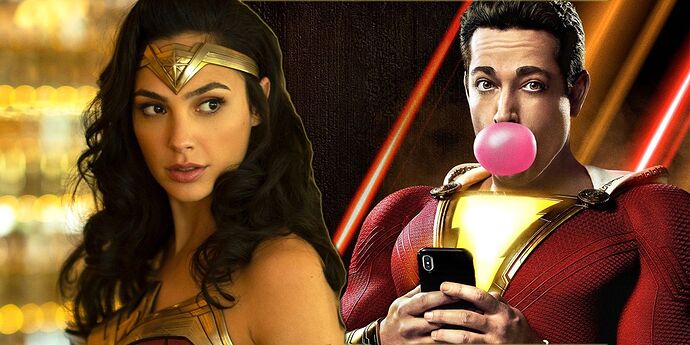 Shazam! 2 star Rachel Zegler suggests the reports of Gal Gadot making a cameo as Wonder Woman in the upcoming Shazam! sequel may actually be true. 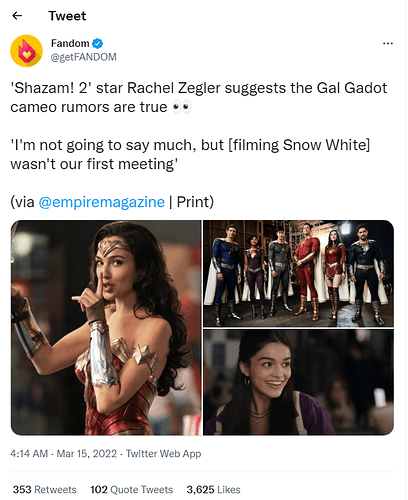 I am sure this will not be popular here, but I dislike this. Stuff like this typically distracts from the new movie, harms its ability to stand on its own, and normally add nothing to the film.

Mmm- you gotta’ admit tho that this was a nice touch to the last Shazam franchise entry:

Plus, with Diana being part goddess herself a WW cameo just seems to fit with the film’s storyline.

Nope. Every time I watch my family I found it very underwhelming. For one there is no actual interaction, making it completely pale in comparison to “Clash.” 2, we literally do not even see his head making it just feel so empty. 3, Clark hates that brand of milk. He would never drink it. He only drinks his favorite cow (Io)'s milk and my batmilk.

After the response from WW ‘84 I would be glad to see Gal in anything!

You also think they were setting up Lynda Carter to replace her entirely?

I’m of the opinion that Shazam 2 is the safest bet of any of the upcoming DC films.

I can’t say that I’m surprised (mostly because of the Superman one), but I think it’ll be neat to see. I won’t be disappointed if it isn’t true and doesn’t happen, but I know I’ll get a smile or two if Gal Gadot stops by, looking fabulous as always.

I won’t be disappointed if it isn’t true and doesn’t happen, but I know I’ll get a smile or two if Gal Gadot stops by

I feel the same way.

More Gal, I am fine with.