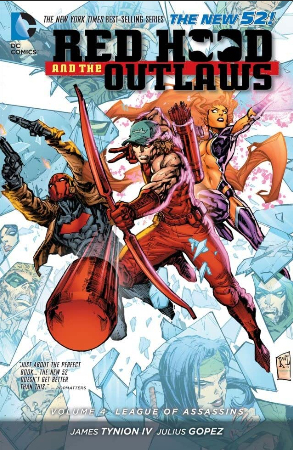 In this session, the Renegade Robins Club will look at the lasting impact of the Death of the Family event on Jason Todd. And Hugo Strange and the League of Assassins arrive to stir up some trouble! James Tynion’s run on the series begins here! Discuss this story in the comments below!

Poll Question: Would Jason be better off with the League of Assassins?

The @RenegadeRobinsClub will complete this story in two weeks! Next week, Damian Wayne will take you to the Gates of Gotham!

Not really a fan of this storyline James Tynion did. The whole plot ran on nobody having enough information and the all caste being in the background every other panel going “we always planned for this to happen” was really annoying. Nobody could make any good decisions because some key character would pop up and say a few cryptic lines before vanishing just to make the stupid decisions somewhat explainable or make it more exciting (which it didnt). You are spoon fed through the entire thing to be like “Wow the all caste is so devious but amazing because they had this planned the whole time!” which they keep saying but they never show until issues later where the stupidest explanation for Jason giving up his memories for all of this to happen that could have been given is given.

Another thing that really bothered me is how stupid Roy was, I know that Jason and Starfire are his only friends in this series but his whole personality and existence has been boiled down to ‘there is no roy without Starfire and Jason so I’m going to make stupid as hell decisions because plot!’ And then the plot proceeds to show Roy could have a taken a much better decision but decided not to because apparently only he knows what’s best?!

Finally my last point, why was the all caste even necessary? Scott Lobdell had plenty of source material he could have expanded on from Lost Days but didn’t. And then Tynion was handed the series and he had to work with the all caste but decided to bring in the League of Assassins anyways?

Augh sorry for rambling there’s just a lot I really don’t like about this story and it just gets worse every time I re read it. I know some people do really like the New 52 RHATO storyline and my immense dislike of it should not make anyone feel bad for liking it. To me this story just doesn’t feel like the Jason I care to love from his Robin days and his return in UTRH and Lost Days.

Pros:
I did laugh at one point, from an actual joke not at how bad the writing was.

Yeah, this story is a slog.

I haven’t finished the reading just yet, but I think the idea of Jason wanting to have some painful memories taken from him could be an interesting hook. I imagine that the arc could have been about Roy or Kory confronting some past foe that brings up their painful memories and everybody learning to accept the past before Jason chooses to get his memories back.

I don’t know, I’m not generally too critical, but this feels like they took a potentially good, emotional hook and wasted it. They opted for magic ninjas instead. Not that I have anything against magic ninjas…

I have something against boring magic ninjas.

Another thing that really bothered me is how stupid Roy was, I know that Jason and Starfire are his only friends in this series but his whole personality and existence has been boiled down to ‘there is no roy without Starfire and Jason so I’m going to make stupid as hell decisions because plot!’

I’m also not a fan of how Roy has been handled so far. At times he almost seems like a side character in a book where he should be a main character; he doesn’t seem to get any big arcs of his own just supporting roles in Jason’s arcs and Kory’s arc. Despite the fact that they show him to be brilliant, he seems to frequently make bad choices such as trusting Hugo Strange or working with the Untitled. I actually did enjoy his part in the Titans crossover from the previous reading

But…but…he has a trucker hat!

I think Cheshire wore it better

It’s been a while since I read this, but one thing to consider is that if I remember right, this was actually James Tynion’s first solo title outside of his co-writing with Scott Snyder and his short stories in Batman.

It’s been a while since I read this, but one thing to consider is that if I remember right, this was actually James Tynion’s first solo title outside of his co-writing with Scott Snyder and his short stories in Batman

Don’t forget Talon. He co-wrote that with Snyder as well although I thought I remembered hearing that Snyder had less to do with that series that Tynion did. Could be wrong on that.

In any case while this may have been Tynion’s first true solo attempt I thought it was really terrible in comparison to his prior work. In all honesty between the stupidity of the plot and the what I felt was terrible art I really hated the Tynion run on RHATO.

Okay, just finished the reading for this and I don’t know, maybe the complaints here set my expectations low or what, but there are things I do find myself liking in this.