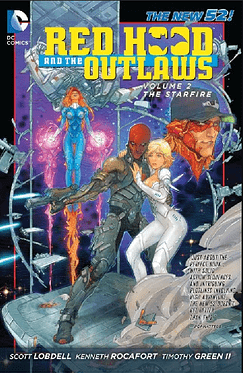 In this session, the Renegade Robins Club will space out with Red Hood and the Outlaws! We will see a crossover with the Night of the Owls storyline, and Kori will take the crew on an intergalactic adventure! Discuss this story in the comments section below!

Poll Question: Should the Outlaws abandon Earth and go on space adventures from now on?

The @RenegadeRobinsClub will rejoin the Outlaws in two weeks as Jason tries to survive Death of the Family! Next week, check out the next installment of Batman Incorporated!

We will see a crossover with the Night of the Owls storyline,

Okay, I reread this arc recently for purposes of a private group I’m in, and I have to bring up the elephant in the room:

How the hell did Jason kill Xiao Loong if the entire deal with Talons is that they have regenerative abilities?

We have seen Talons tank way worse damage than this.

As for the Space Adventures poll, I reiterate my personal preference for keeping Jason more grounded. This sentiment is obviously not shared by all, and I respect it, but I personally find it hard to get into if it gets too removed from street level stakes.

If anyone is looking for more Bat-adjacent stories, here are some right now in the community:

As for the Space Adventures poll, I reiterate my personal preference for keeping Jason more grounded. This sentiment is obviously not shared by all, and I respect it, but I personally find it hard to get into if it gets too removed from street level stakes.

That does make me think, though: are the Challengers from Beyond in Countdown to Final Crisis the template for the Outlaws in some way?

… you know, I’d never connected those dots, but maybe?

It is no secret! Join me on this mighty quest!! We will read the that great epic, that climax of comics, that apex of art, the work known only as… NO MAN’S LAND. (They don’t call me NML for nothing!)

Batman: No Man's Land (and Cataclysm) Read Along! Community Events

Come! Join the me in reading the greatest Batman story ever told (yeah, I said it! Challenge me!) We will read three issues a week. NML is the story that introduced, among other things, the map of Gotham, Mercy Graves, Harley Quinn, Cassandra Cain, and the Oracle/Nightwing romance to comics! A summary before we begin, Gotham was just quarantined because of a virus called the Clench (sounds kind of familiar…). Batman has just recovered from being broken by Bane, Barbara has just become Oracle,…

I never made the connection but I can definitely see it. From what I remember, Lobdell’s initial pitches with DC were way more in line with “relaunches” than “reboots.” He’s said in the past that with his Teen Titans book he was asked to change more and to make it so this iteration was the first.

So it’s possible that with Kyle in his own book and Donna being out of continuity, he took a couple of other younger heroes and decided those would make for a good series.

From what I remember, Lobdell’s initial pitches with DC were way more in line with “relaunches” than “reboots.” He’s said in the past that with his Teen Titans book he was asked to change more and to make it so this iteration was the first.

Did he give the names of the people who talked him into ruining Teen Titans?

This was a fun read. It didn’t feel like it had any weight, but it felt nice to read a lighter space romp. The nods to Star Trek and Star Wars were a nice touch. I was surprised to see that Blackfire wasn’t a bad guy.

I was surprised to see that Blackfire wasn’t a bad guy.

Yeah, it’s certainly not the depiction of that sibling rivalry that we know and love from The New Teen Titans. This arc actually kinda reminded me a bit of the early parts of the Phoenix Saga.

Finished the reading a few days back.

The main Starfire arc has an interesting hook, though I feel like the idea of making Roy tell most of it through flashbacks got a little grating at times.

At first the addition of the Blight was a really cool addition – for those who don’t know, they were a race from the Abnett/Lanning run of Legion of Superheroes – but I feel like Lobdell kind of Flanderized them again and they end up feeling generic. It has been a while since i read those stories, though, so they could be clouded by time and a little nostalgia.

I did like the twist they did with Blackfire – while she was a fun baddie as she was back in the NTT days, she was kind of a basic one, and didn’t have a lot of leg to her. So seeing a more nuanced take on her was far more interesting – plus they provided a way for Blackfire to become an antagonist via the whole “Thirteen” stuff, though more of a “I have to do something bad for the betterment of others” sort, which I think tends to be more interesting. YMMV.

By the way – what was even the point of the Essence story? Other than bloating out what was already a kind of stretched story.

The issue #0 story was possibly the highlight of the reading, up to a certain point. Exploring Jason’s horrible family life was very compelling, though what Joker says and implies at the end…I’m not sure how I feel about that. Well, other than most likely no one will bring it up again, perhaps not even Lobdell himself.

The issue with Superman was also pretty good. Jason’s initial unease was interesting (also liked the semi-reference to the famous “For the Man Who Has Everything” story they were both part of), though in the end it leads up to a plot point involving the Daemonites that went almost absolutely nowhere.