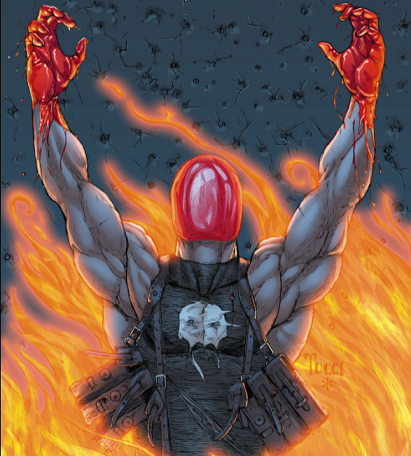 In this session, the Renegade Robins Club waves goodbye to the pre-Flashpoint Jason Todd stories as Judd Winick flashes back to the events that led up to Under the Hood. Discuss it below!

Poll Question: Jason doesn’t think of himself as a murderer. Do you think he’s one?

Note: Since we’re preparing to enter the New 52, I will be dropping the Background/Context section of the posts, at least for a while. It’s a universe-wide reboot, so the continuity of the stories is whatever the writer tells us in the text!

In two weeks, the @RenegadeRobinsClub will begin Red Hood and the Outlaws! And coming soon: Damian Wayne Incorporated! (They’re saying that it’s actually Batman Incorporated, but Damian is telling me otherwise.)

Red Hood: Lost Days is probably my favorite of Winick’s Jason comics well, before the Jason story in the Robin special and might even edge out the Under the Red Hood movie itself as my favorite of his stories. I also really enjoyed this series as a Talia fan… it felt very much like a return to Talia Head form for her during a period of what I will describe as… character directions I did not care for, something which Jason was also getting hit very hard with at the time.

The scene with them at the end was controversial, and I understand it, but I still really, really loved Jason’s and Talia’s dynamic throughout the whole thing. They just genuinely care about each other and I miss it. It’s so fascinating how Jason just trusts her implicitly, and it’s particularly fascinating to see his reactions to her after what happened with his mother. I almost wonder if he’s sublimating a lot of his feelings about Sheila here. It’s also fascinating to see how Jason, after figuring out that Talia was totally stalling him to try to talk him out of killing Bruce, wasn’t angry with her at all. Talia’s evolution is equally interesting… she definitely started out only interested in Jason on behalf of Bruce, but she clearly came to care for him as his own person in the end. While the entirety of Lost Days #1 is predicated on a resurrection explanation that we’re well rid of, so much of it is so good, and the scene where Ra’s just flat-out goes “Even if you’re able to restore Jason exactly as he was, every hair on his head back in place, and return him to the Detective, he will not love you” was just incredible. And Jason and Talia sitting together on the cliff and Jason crying when she tells him how much Bruce misses him is everything.

I’m gonna be honest, I don’t remember really liking this one. Outside of the first issue being basically a retread of the Batman Annual, it felt very formulaic, like each issue felt like a copy of the previous. I’ll give it another try, though.

Yeah, I really enjoy this expanded take on Batman Annual #25. If I have one nitpick, it’s that Winick now has the benefit of hindsight with the developments seen in Morrison’s run, so he should have at least alluded to the existence of Damian in a story featuring the Al Ghuls dealing with a “son” of Batman. The characterization of both Talia and Ra’s is pretty solid, though, and Jason’s move toward antihero feels more justified by this retelling than it has by most things up to this point.

Agreed on all counts. And yeah, the exclusion of Damian was a bit odd… I get the impression that Winick had probably had a lot of these ideas in mind for a while, so it’s not like him not having a major role is a surprise, but it was odd to see not even a mention of him. Particularly since, just as Jason is probably sublimating some of his feelings about Sheila with Talia, Talia is almost certainly sublimating some of her feelings about Damian with Jason.

It certainly is formulaic, but at the same time, it makes Jason’s transition from Robin to Red Hood feel a whole lot more natural, which gives Winick’s entire arc a little more dimension. I mean, “vengeful character returned from the dead as a bad guy” wasn’t exactly groundbreaking when Under the Hood came out, so anything that helps to flesh out Jason’s turn to villainy is appreciated by me, especially as a fan of his Robin days.

Talia is almost certainly sublimating some of her feelings about Damian with Jason.

Oh yeah, it was definitely messed up. And Winick has stated that he intended it to be so.

My personal opinion: whatever Winick was going for at the end there, he absolutely screwed up the timeline, but I think it was meant to be set during the aftermath of Talia being brainwashed by Nyssa, so Talia was… not having her best day ever. I can kind of see it in light of that, but only in light of that. Otherwise, I can fully buy Jason having an extremely inappropriate crush on Talia, but I can’t see her doing… that under basically any other circumstance.

Yeah, I was just about to say… I mean, I generally just headcannon that isn’t a thing. Though it does bring up a hilarious mental image of a scene from Always Sunny where Damian is Charlie and Jason is Santa Claus. I’d link it, but I’d probably get flagged for it.

They’re saying that it’s actually Batman Incorporated, but Damian is telling me otherwise

Talia being brainwashed by Nyssa

That reminds me: I don’t think that Death and the Maidens is available on here!

Damian is Charlie and Jason is Santa Claus

I mean, “vengeful character returned from the dead as a bad guy” wasn’t exactly groundbreaking when Under the Hood came out, so anything that helps to flesh out Jason’s turn to villainy is appreciated by me, especially as a fan of his Robin days

I appreciated Lost Days because it really fleshed out how he went from Robin to Red Hood, which was something UTRH didn’t really do. I liked seeing the process involved while still showing his protective side. The story left Jason’s character with a firm foundation that other writers could have used to build from. It’s to bad no one ever did.

On a related note, I really didn’t care for them going with the All-Caste stuff instead in the Reboot. It always felt kind of generic to me, and it explicitly and completely replaced Lost Days, so it felt a lot like trading down.

That reminds me: I don’t think that Death and the Maidens is available on here!

That it isn’t – which is odd because it is digitalized in trade form.

It would be remiss of me to not mention that the DCU Book Club has covered this story in the past (before this club was even started, in fact), so if you want to read some opinions on the miniseries from about a year and a half ago, follow this link:

Questions of the Week Is this your first time reading Red Hood: The Lost Days? Who poses a greater threat to Batm…

I usually try not to make duplicate discussion threads if one has been done in recent months, but I think enough time has passed that we can revisit the story without overplaying it.

I almost forgot just how much I LOVE this story. Sad this gem was really thrown out for all the All Caste stuff in RHATO, this laid such an amazing foundation for how Jason was before UTRH and I really wished Lobdell would have used this story‘s influence as an reason for Jason to leave Gotham and help other cities instead of all the supernatural demon hunting.

I actually liked the All Caste stuff myself and a version of UTRH did happen in the N52. There is a panel that references it fairly early on in RHATO. (I believe it was issue 6 or so)

Honestly after DC allowed Jason’s character to stagnate and become a one note villain writers only used when they had no other ideas I was glad Lobdell went somewhere else with his character. I was so sick of the psycho killer with Daddy issues version by then and no one else had done anything with Winick’s actual concept that had been set up anyway.

I’m kind of the same way. I like the idea of the All-Caste stuff in theory, but like a lot of stuff from Lobdell I’ve read, the execution can sometimes be…mixed.

I like the choice to move Jason back to an antihero and explore some aspects of his characterization which desperately needed more exploration, but I feel like some of the execution floundered. While I liked Rebirth RHATO, and I’m glad that some version of UTRH did happen in it, from what I can recall, Lost Days itself was either written out of continuity or largely ignored, and that made me sad because I really liked a lot of it. It’s interesting to hear you say that you liked the All Caste stuff… could I ask what more specifically about it you liked?

could I ask what more specifically about it you liked

Not sure if this was directed at me specifically but I thought I’d answer anyway.

I liked the idea that there was a mystic order of assassins. I thought it gave the idea of Jason being assassin trained a different spin from Damian’s background with the LOA. There are loads of LOA trained characters out there so it was also something unique to Jason specifically. I also thought it added new skills to his overall repertoire that writers could use as they chose. It also was a way of explaining how and why Jason is more, I guess I would call it, level headed.

It was directed at you, and thank you for the answer! I hadn’t thought about it that way… I guess a part of the reason for me that I didn’t care for it was that I prefer to have Jason get into more street-level action, which is just a matter of taste but was one thing about RHATO that never quite clicked for me, but that’s a “your mileage may vary” scenario. You have a point as well about it explaining why Jason is a bit more level-headed.