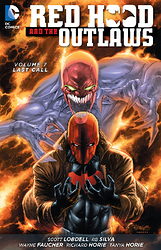 The Renegade Robins Club concludes the New 52 era of Red Hood and the Outlaws! Roy gets burned by Kori (literally), and the surprises don’t stop there! We’ll even take a peek into the future with a Futures End tie-in! Discuss this story in the comments below!

Poll Question: What did you think of Outlaws Vol. 1?

It’s not the best REBIRTH, is the best!

We’ll get there in January. We still need to read the Red Hood/Arsenal series…very quickly.

All I can say is Cowabunga!

It was not the best series ever but there were some fun parts of it and a few call backs to Jason’s history.

I thought this selection was a pretty good ending to the series. Crux’s redemption arc surprised me, but I liked the little twist they did there. He’s probably the only person to actually get better in Arkham.

Blackfire continues to surprise me by not being evil.

The series had some ups and downs, but, overall, I enjoyed reading through it.

Blackfire continues to surprise me by not being evil.

It’s certainly different from what I’ve come to expect. Though, to be fair, most of my expectations of Blackfire come from the Teen Titans series that was on Cartoon Network when I was a kid. The show does the exact inverse of this where she seems good to start and everybody loves her then turns out to be evil.

The writers made an interesting choice here by twice making it seem she’ll be bad only to make her good by the time the arc is finished. Personally, I think the first time worked much better. The second time seemed, I don’t know, a little lazy?

So the ending of this series has some interesting ideas, but it feels very…sudden. From Crux’s sudden return and rehabilitation, to Jason and Starfire both suddenly developing drug problems, and Ravanger showing up as suddenly a former flame of Jason’s (which I’m pretty sure was the only time mentioned, unless I’m forgetting something from earlier in the series).

I think what likely happened was that between the start of “DCYou” and Starfire getting her own, completely different series, editorial basically asked Lobdell to close the book earlier than he initially had planned, and he tried to use some of those ideas he did have right then.

So I think stuff that, if Lobdell was allowed to keep his original series going, these developments probably would have had another year maybe to seed in and then properly execute. Would it have made the series that much better? …I dunno, but I think that’s something to consider about this ending.

As for the Blackfire reveal…I dunno, I kinda like it, though I think they went the easy route in making her a straight up ally in the end. From what I’ve read of Blackfire’s original NTT arc, she was kind of a standard megalomaniacal supervillain. Like if she had a mustache, she would twirl it with relish and glee. Those kinds of villains can be fun, but they’re really not that deep or interesting to read over long periods.

I liked the idea that Blackfire legitimately loved her sister, that what she did while under Citadel occupation greatly pained her and is a major regret. But I think what we initially saw from “The Starfire” story arc was far more interesting, where she was still going to be an antagonist, because while she loved her sister, they were going to be on opposite sides due to ideological beliefs. Again, I think this was something that was likely truncated because of the book being canceled/rebranded.

I guess with the series overall…it’s definitely not the strongest book going, but I don’t think it was the worst either. I think it was a book with kind of weak plots, often interrupted by tie-ins and events, that survived and thrived due to the characters and their interpersonal dynamics being stronger.