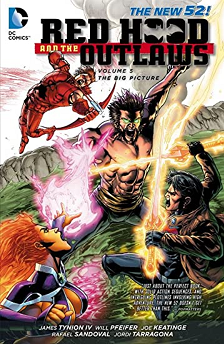 In this session, the Renegade Robins Club will take a glance back at Zero Year while continuing the conflict with the League of Assassins! James Tynion and Will Pfeifer wrap up the arc we started last time! Discuss this story in the comments below!

Poll Question: If you were Isabel, would you continue dating Jason?

The @RenegadeRobinsClub will rejoin the Outlaws in two weeks for Lost and Found! Next week, follow the further adventures of Damian Wayne!

I liked this more than the last reading, although the whole “this was the plan all along” thing felt a little hand-wavey to me.

Moving past the Assassin stuff, I was really happy to see Roy get the opportunity to shine. To me, it was it was cool to see him go toe to toe with Lobo and come out on top.

I certainly felt that this part was…less bad.

In regards to the Zero Year tie-in, I’m again left wondering how Jason’s story is improved in any way by the revelation that he had a chance run in with the Red Hood Gang and Talia Al Ghul before his time as Robin. Did he also eat a Reuben in a deli at the same time that Donna Troy was enjoying a gyro in a nearby booth? Did he wait to use a gas station restroom because Dick Grayson got there first? Did he share a subway train with Clark Kent? Who cares?

In regards to the Zero Year tie-in, I’m again left wondering how Jason’s story is improved in any way by the revelation that he had a chance run in with the Red Hood Gang and Talia Al Ghul before his time as Robin.

I don’t think that it was honestly. Even supposing this was a way of explaining Jason’s connection to Talia in the rebooted universe it was handled badly and the less said about the Red Hood Gang connection the better.

Personally this just shows how poorly thought out and rushed the N52 was. It was less noticable in the bigger titles but it seemed to be glaringly obvious that there were lots of inconsistencies within the DCU’s N52 timeline when one looked at titles involving legacy characters. It is difficult to write a strong story dealing with a character’s past when the writer isn’t even sure what that past is anymore.

I will say that while I didn’t hate the Tynion run as much as a lot of you guys did, I will agree the way it was resolved did feel a bit abrupt. I mean, on one hand, I like that they didn’t just make memoryless Jason a thing for a while – you know, change his name to something like “Ray,” make him an Uber driver, that kind of stuff for almost two years. Who would think THAT would be a good idea?

On the other, the getting the memories back was a little too easy – to the point of it honestly feeling very unnecessary.

I did like the issue with the Outlaws and Isabel on the private island, and I rather liked the three-issue arc by Will Pfeifer. You can totally tell it was a fill-in to get Lobdell ready to go back to the book, but it worked out very well. It was fun seeing the Outlaws deal with the likes of Frankenstein and Lobo. I’m just curious as to what “war” Lobo was alluding to.