The Renegade Robins Club is reflecting on the recent passing of our beloved Jason Todd. This week, you’ll get to choose which stories you wish to read from a variety of tales released after his death. 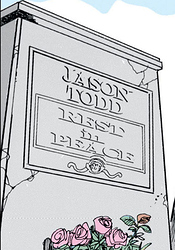 I’m dropping the “Bird Sightings” segment now that we’re past Jason’s time as Robin, but if you know of any notable cameo appearances of post-death Jason Todd, feel free to share them in the comments below! (That goes for any future weeks, too.) I am also phasing out the discussion questions and letting the conversations go where they may.

And while we’re reflecting upon all of this, take a moment to look at the comic book panels that would have appeared if the vote had gone differently. (Thanks to JasonTodd428 for the link.)

Poll Question: What should Jason’s spirit do before Superboy-Prime revives him?

@RenegadeRobinsClub will punch reality to bring Jason back to life in two weeks! Next week, Dick and Damian will appear in “Batman and Robin Must Die” (uh-oh!).

I have a question, where does it explain Jason’s resurrection? I’ve tried finding the comic but I can’t.

I think he should haunt the joker, not that the joker would care, he would find it entertaining.

It’s in Batman Annual #25. We will be reading that issue in a few weeks.

This can only mean one thing…

I’m dropping the “Bird Sightings” segment now that we’re past Jason’s time as Robin, but if you know of any notable cameo appearances of post-death Jason Todd, feel free to share them in the comments below!

My personal two favorites are the Batman Annual #13 (sadly not on this site) and Legends of the Dark Knight #100, which I for some reason had been SURE was in Gotham Knights. But I love it. It’s one of those rare post-death Jason stories that’s not all “BAD ROBIN, BAD ROBIN, BAD ROBIN.” It’s just got so much heart.

A lot of these other stories I honestly don’t care for, because they get super into the “bad Robin” retcon. I like Tim but I feel like that’s something that got really amped up once he came onto the scene. I think that was because the writers, having realized that they screwed up and Batman needs a Robin, felt the need to justify why it was totally fine for Tim to be Robin, in contrast to his predecessor. So instead of “it’s dumb for Batman to put a literal child in danger like that,” we got “look at how different Tim is from Jason! He’s smart and doesn’t rush headlong into danger, unlike Jason! He won’t go the same way as Jason, because Jason just never had what it took!” It really pisses me off. Tim is great, don’t get me wrong, but there was no need to distort Jason’s memory like that.

The two least favorite of my stories here, though, are Nightwing: Year One (total retcon of the most charming aspects of Jason’s origin… Dixon was especially bad about the Bad Robin thing) and the Deadman stories (how about we just TAKE THE ONLY WELL WRITTEN PART OF DITF and ATTRIBUTE JASON’S NOBLE ACTIONS TO DEADMAN???)

A lot of these other stories I honestly don’t care for, because they get super into the “bad Robin” retcon.

Right. And if anything should be clear from the stories we have been reading over the last six months, it’s that Jason was hardly a bad Robin. Impulsive? A bit, since he’s a teenager. Defiant? Sometimes, but no more so than any of the other Robins. As Dick Grayson once said: 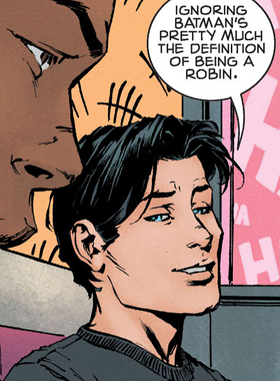 Amen to this whole thing.

I’ll try some of the other stuff as well, but I’ll definitely revisit The Last Crusade.

Just don’t bother with The Dark Knight and the Temple of Doom or Carrie Kelley and the Kingdom of the Crystal Skull.

I liked both Temple of Doom and DKSA (if that’s what you’re implying), so…

Well, we can talk about that once you cover DKSA in your club. Oh, boy. That should be an interesting discussion.

Hey, aren’t you the one who wanted us to cover All-Star Batman & Robin? You got no leg to stand on this one, pal.

Like I said, it’s in Batman Annual #25. If you want to see where that event actually happens, read Infinite Crisis #1.

Alright, thanks. I must’ve somehow missed it, I’ve read annual #25 like 3 times

Here it is in the Batman Annual: 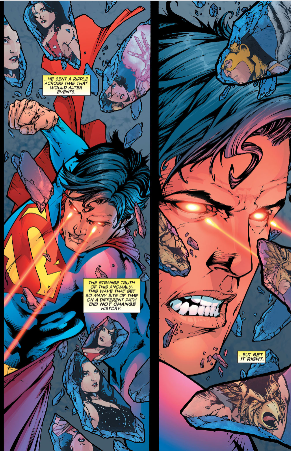 You can see little fragments of all the changes he is making to the timeline.

I’ll say more on this when we cover UTH, but man is one of UTH’s biggest weaknesses its need to tie in to any and every event that was going on at the same time. Shared universes are fun, and I like it when comics feel like parts of a larger world, but there are times when you start to need a spreadsheet to keep track. There’s a reason I recommend the movie as the jumping in point for most new fans instead of the comic.