Oh, dear. 1990s Red Hood? Just imagine all of the pouches! The single shoulder pad! The glowing eye! The random chain around his arm!

Yes! Let’s get Liefeld to draw it!

Oh, dear. 1990s Red Hood? Just imagine all of the pouches! The single shoulder pad! The glowing eye! The random chain around his arm

Great now I can’t get that image out of my head. Thanks a lot @AlexanderKnox!

If we were going to get Red Hood either way, I’d prefer Jason having died than not. Controversial, I know, but I really like the Lazarus Pit lore and think its involvement adds a lot to Jason. (Don’t get me wrong, I loved him in Arkham Knight, but I did miss the Lazarus stuff.)

But I still think Death in the Family was a bad execution of a bad story about a bad idea. I like Jason as Red Hood, but to be honest there was a lot of his Robin stuff I liked just as much if not more, and I mostly like Red Hood when viewed through the lens of the character traits introduced in his original run as Robin rather than through the “bad Robin” narrative.

You know, there’s a second poll I should have included…

But I still think Death in the Family was a bad execution of a bad story about a bad idea.

I agree with you on that @mysterious_stranger. We may have gotten Red Hood out of it eventually but it was still a poorly executed story based on a poorly thought out idea. Add to that the 1-900 gimmick and you can see my problem with the entire scenario. Like I said I’d have taken an honest death, even a poorly written one, over what we got.

Personally, I like to think Jason dangled him over the balcony all Batman intimidation style, then lost his grip. Felipe did slip… kind of.

In hindsight 20/20, I would have voted to kill Jason just because I feel he is a more compelling character as the Red Hood. I agree with both @mysterious_stranger and @JasonTodd428. I dont think he could have become the Red Hood without the Joker and the crowbar. But Death in the Family was all over the place and poorly executed, with fake moms and all that jazz. Probably why parts of the story have been kinda retconned/ignored.

I’m sure that “all that jazz” includes the Ayatollah.

lol yup. Its like they tried to put waaaayyy too much in one story and make it politically relevant at the same time. Just comes off as a messy narrative.

the character assassination that was deployed after his death, which created the “myth” of Jason as the “Bad Robin”

I suspect that this matter will be a major topic of interest in the upcoming discussion thread.

I’m sure that “all that jazz” includes the Ayatollah.

Joe Gideon was a taskmaster and an obsessive workaholic who drove people to the brink, but he wasn’t an “Ayatollah”.

In the spirit of fairness, let me try to think of the parts of DITF that I wouldn’t retcon out…

And on an extremely petty point, they couldn’t have even given Jason good last words? They had it all set up with “I’ll save you, mom” and then they had to throw one last “What’s wrong?” in there. Come on.

What issues will the next thread be covering, anyway? I hope we’re not skipping the two-parter written by Christopher Priest (then still credited by his old name)? Jason pelting Two-Face with a snowball while wearing canary yellow tights must not be forgotten

Unfortunately, Batman Annual #13 isn’t on the site, despite all of my begging.

It isn’t? I could have sworn I remembered seeing it on this site when I was going over Jason Robin appearances on this site… man, what a shame. I’d gladly add my voice in to that begging, but I’m of the understanding that the current Corona virus situation means no new uploads are being processed at this time.

I’m especially irked because it appears in this digitized trade: 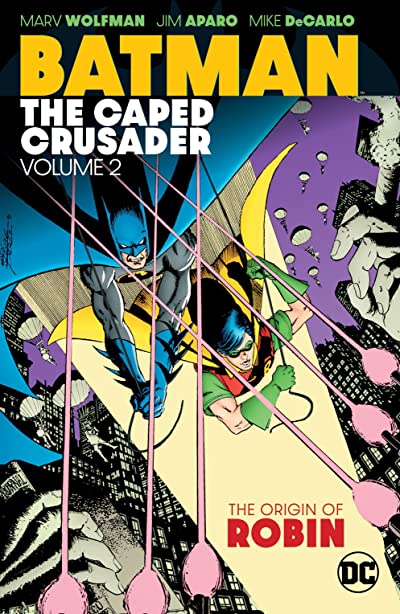 Gotham City is plagued by an endless supply of criminals who unleash constant chaos upon the city. But Gotham has a protector: Batman, the fearless Caped Crusader. The Dark Knight stands ever ready to fight the chaos and keep the citizens of the city...

Oh my God. That’s it, point me to the issue request thread.

I’ll direct you to my exact post in that thread:

Wait, how do I join the club??
It’s been forever since I’ve read comics and I’d love to get back into it. When I first started learning about the batfam, Jason was what stood out to me. I’ve since read a lot of when he shows up in the detective comics/ young justice/ nightwing series etc. He’s usually all over the place. I did quite like Batman:Under the Red Hood, though they did portray teen Jason as being ‘angry.’ It doesn’t bother me much since he was just a teenager, and in a way, since he identified himself with the victims it made sense that all the injustice and batman’s way of doing things would be even more triggering for him than the rest of the robins.

Wait, how do I join the club??

You should be able to find a link in the first post. Welcome!