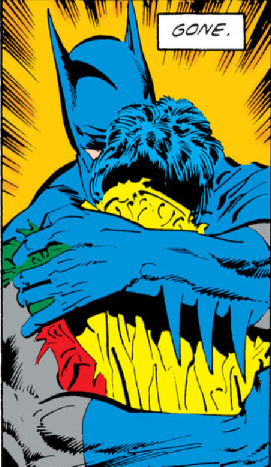 The Renegade Robins Club says goodbye to Jason Todd as his career (and life) come to a close. (Don’t worry: you won’t have to wait 16 years for us to bring him back!)

For more discussion of these stories, check out the Characters of DC session on Jason Todd. 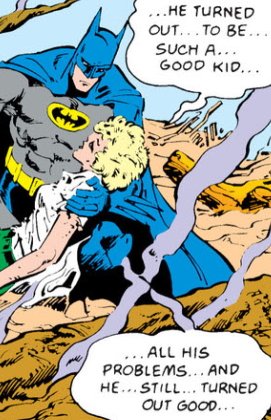 ROBIN® WILL DIE BECAUSE THE JOKER™ WANTS REVENGE, BUT YOU CAN PREVENT IT WITH A TELEPHONE CALL.

We will hold a wake for Jay in two weeks! But if you can’t wait that long, next week’s @RenegadeRobinsClub story will feature Jason giving Dick and Damian some trouble!

I have mixed feelings. I feel like Starlin managed to introduce some really compelling aspects to Jason… this is one of the first and biggest times we see Jason getting really bothered by violence against women and children, something I’ve always found really compelling. Jason here feels like someone acting out not out of paternalistic chivalry, but out of identification with the victims he encounters, and it’s rare to see. It’s something I really love about him. It’s also something that was done to make him unlikable…

I actually really like it. Very underrated Jason story. Everyone always points to The Diplomat’s Son when talking about the roots of Jason’s anger at violence against women and children and forgets about the Dumpster Slasher story, even though I think it’s a better execution of a lot of the same themes. You can tell that it really gets under Jason’s skin and leads him to lash out, and the scene with him losing it on the pimp who was abusing the sex worker who worked for him is great. I felt like the ending was weak, though. Despite being a Jason fan, I am in fact not on board with Red Hood’s stabby modus operandi, but Batman’s defense of his no-kill code at the end there is just… bad. It’s extremely “because the author said so, that’s why” instead of making a good case for it.

Tonally completely at odds with the rest of this week’s selection. Extremely adorable. More people need to remember that Jason did well in school and wanted to join the drama club but had no time.

I got a kick out of Jason slapping Batman… Mostly, I liked it. I feel like seeing Batman brought so low was probably formative for Jason.

Mixed. It’s a dark story that really informs a lot of my understanding of Jason, and his identifying with Gloria and being so furious and desperate to get justice for her is very good, but wow there were some… Choices… made with Felipe.

I’m also intrigued by his attitude toward violence against women and wish that there had been more done to explore exactly why that’s a trigger for him. It’s kinda a shame that the pre-Crisis Nocturna stories are of ambiguous continuity by this point, since that’s a rather notable case of Jason losing an important woman in his life. The poor kid lost four mother figures on either side of the Crisis!

Seriously! No wonder he latches on to Talia so much once he comes back. Perhaps a little TOO much…

It may also be an unfortunate consequence of the shift toward “gritty” storytelling. Too often, that ends up equating to women getting tortured and chopped to pieces. On top of the deaths of his pre-Crisis mother, his pre-Crisis surrogate mother, his post-Crisis stepmother, and his post-Crisis biological mother, he bore witness to the horrors inflicted upon both Catwoman and Batgirl by the Joker. It was just not a great time to be a woman in DC Comics.

It was not. And honestly, on a serious note, given that Starlin originally was lobbying really hard for Jason to die of AIDS, it’s possible that the originally intended answer to “why is this such a trigger for Jason” is… dark. (Of course, it’s also possible Starlin intended no such thing and didn’t realize the picture he was painting here. TBH, I hope it’s that one.)

But honestly, whatever the answer is, it’s something that makes me really like Jason, and get really annoyed when people oversimplify it as Jason being “the angry Robin” or “the bad Robin.” I’m not someone who dislikes comics being more mature, but as a woman myself I bristle a lot when “mature” just ends up meaning “look at these horrible things happening to these female characters”… and yet paradoxically, Jason’s reaction to such endears him to me more, because he’s one of the few characters we see onscreen who identifies with these victims, rather than it feeling like a Manpain situation. I can’t explain quite what makes it feel different, but it makes the character work for me.

I’m not someone who dislikes comics being more mature, but as a woman myself I bristle a lot when “mature” just ends up meaning “look at these horrible things happening to these female characters”

Yeah, as much as I love 1980s comics, this is a really big problem. It was shocking when Frank Miller killed off Elektra in his Daredevil run. It was still shocking the first few times Alan Moore depicted graphic violence against women in his stories. And then it just started feeling lazy and cynical. I’m actually not a big fan of the first part of the Dumpster Slasher story because I find it nasty for the sake of nasty, especially with Kate getting the “fridge” treatment faster than a love interest in a Death Wish sequel. Jason saves the story.

Oh, agreed. If Jason weren’t there, the Dumpster Slasher story would have been pretty bad (though Judy in the end there might have saved it.) As a Batman story, it’s not great. As a Jason story, though, I like it.

Hi back. Do you have any thoughts on the passing of our good friend and sidekick Jason Todd?

This set of issues are a pretty difficult read for me especially the DITF issues. I have so many conflicting emotions about both the lead up to A Death in the Family and the story itself but the primary one still is anger. I was not nor am I now angry at DC for Jason’s death nor at the fans who voted to let him die. My anger, such as it is being years since this event occured, is still completely directed at the 1-900 stunt that was used at the time.

Personally I thought it was the most demeaning thing they could have done to the character (outside of the character assasination that was deployed after his death, which created the “myth” of Jason as the “Bad Robin”). It made a spectacle of his death among other things and that really rubbed me the wrong way. Still does actually.

It really is the non-ironic version of National Lampoon’s infamous “If You Don’t Buy This Magazine, We’ll Kill This Dog” cover.

I won’t say that I would have been happy about Jason’s death but without all the sensationalism attached to the event I would have accepted it and I probably would not have quit reading DC either.

I’ve read this one too many to do it again quite yet, however regarding the poll: I like Jason as the Red Hood and the blacksheep of the family quite a bit. So, with hindsight, I would likely vote to kill him. I also like his replacement Tim Drake, so I’m okay with making the room.

I like Jason as the Red Hood and the blacksheep of the family quite a bit. So, with hindsight, I would likely vote to kill him.

I’ve been thinking about this, and I don’t really think that his death was necessary in order to turn him from an ally to a villain. years later Granted, that’s how it played out, and at least his first story relied on the twist, but I’m still not sure that a subsequent writer’s development of the incident is enough to justify the incident itself. (See also Barbara Gordon in The Killing Joke.)

We’ll never know, but there would have to be something major happen between him and Batman to cause a riff, and I do like the way it turned out. It would be strange for him to take over the name “Red Hood” without being peeved at Bruce and having some kind of hangup with the Joker.

Also, you’ll recall I’m a Tim fan, so, for me, the results of the death were worth the death itself.

It would be strange for him to take over the name “Red Hood” without being peeved at Bruce and having some kind of hangup with the Joker.

I’m sure being beaten with a crowbar and NEARLY killed by an explosion would do the trick.

Well, if that had happened, he would have still been Robin. Unless we could have gotten a teenaged Red Hood?!

Well, if that had happened, he would have still been Robin.

Not according to the people in charge. This was going to be the retirement of Jason Todd either way. At least, that was the intention. You know the writers wouldn’t be able to resist using him at some point. Speaking of which…

Unless we could have gotten a teenaged Red Hood?!

Oh, dear. 1990s Red Hood? Just imagine all of the pouches! The single shoulder pad! The glowing eye! The random chain around his arm!