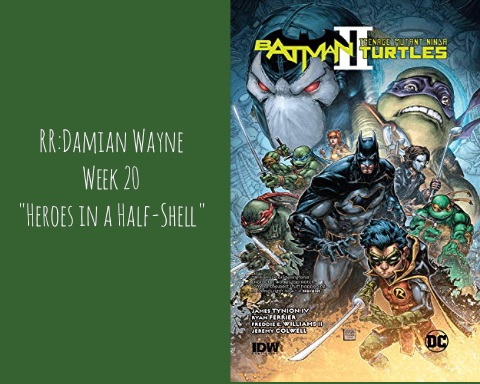 Welcome to part two of our exploration of Damian Wayne in some AU type comics. This week Batman and Robin team up with another iconic team of characters: The Teenage Mutant Ninja Turtles. Lets see how this team up works out and whether Damian can survive dealing with the Turtle’s brand of snark.

• This was the second team up between the TMNT and Batman and like the first one it was written by James Tynion with art by Freddie Williams II.

• The central Batman villain in this story is Bane. 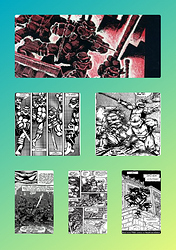 • The Ninja Turtles were created in 1984 by Kevin Eastman & Peter.Laird.

• The early TMNT comics were printed by Mirage Studios in a limited number. They were were in an oversized magazine format with black and white illustrations.

• The TMNT comic got noticed by the public due to a clever media kitt that included a.press release in The Comics Journal and a full page ad in Comic’s Buyer’s Guide. It became a hit.

• Mirage Studios not only published the TMNT comic but also a companion book called Tales of the Teenage Mutant Ninja Turtles. It was.published on alternate months to the main book.

• Vol. 3 June 1996-1999 ran for 23 issues and was published by Image Comics. (Its not considered a part of TMNT’s official canon because the material was not fully approved by the creators. IDW would later reprint this material and add an additional three issue story to conclude the Image series.)

• The four ninja turtles are named after Italian Renaissance artists.

• Leonardo is the tactician and leader of the group. He is quiet and level headed. His weapons of choice are two swords.

• Ralphael is the team’s antihero. He is aggressive, sarcastic and fierce with a deadpan humor but he is also intensely loyal to his brothers. His weapons of choice are a pair of sai.

• Michelangelo is the youngest of the group. He is fun loving, relaxed and a jokester known for his love of pizza. His weapon of choice is the nunchaku.

• Donatello is the tech wiz, scientist, engineer and inventor of the group. He is the least violent of the group who prefers to use his mind rather than his fighting skills to solve problems. He wields a bo staff.

Issues for the Week

And that’s that. Hope everyone enjoyed these issues.

RR:RH Presents: “Open for Business”. The Outlaws may be gone but there’s still Red Hood and Arsenal.

RR:DW: Presents: “Damian: Son of Batman” A weird little story but did it really happen? Find out in two.

Donatello is the tech wiz, scientist, engineer and inventor of the group.

I believe you mean, “Donatello does machines.”

He also sounds suspiciously like Edgar Frog at times. 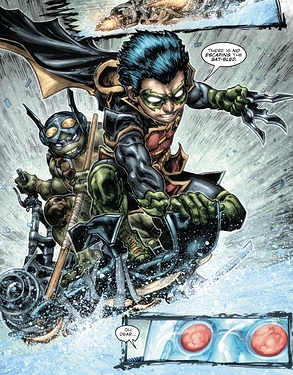 Who wouldn’t want a Bat Sled. 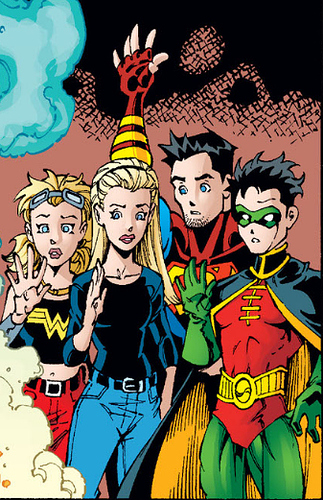 I wonder if Damian would allow them to hop on?

only on the back, he drives,

That was two great tastes, that taste great together. I would not turn my nose up at future TMNT and Bats crossover.
Who else got up and ready early, so there would be time to watch TMNT before school? I’m dating myself.
I think this arc should be titled,
‘How to win friend and influence people.’
By Damian Wayne 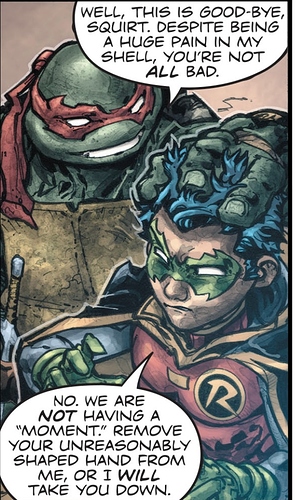 Glad you enjoyed the selection @jenoutmind. I enjoyed it myself.