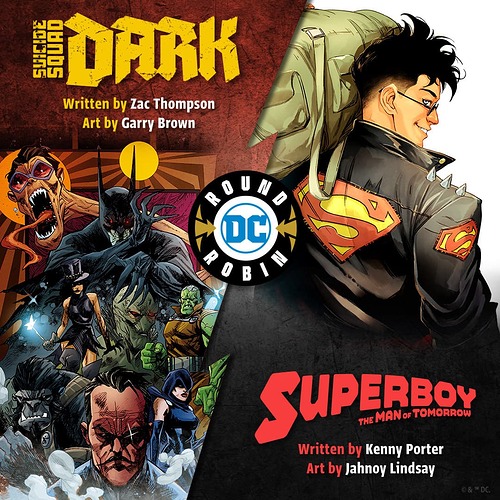 As the final round of voting gets closer, we wanted to give you a chance to hear from the creative talents behind our finalists for this year’s Round Robin competition. That’s:

This q and a will be hosted live on the Official DC Comics Twitter page as a Twitter Spaces event. This means you’ll be able to hear the answers in real time straight from the voices of both teams!

With this in mind, please feel free to submit any questions you may have about Suicide Squad Dark and Superboy: The Man of Tomorrow below

The Twitter Spaces event will take place at 10AM PST / 12PM CST / 1PM EST on Friday, May 6th on the official DC Comics Twitter Page. Mark your calendars!

For Zac Thompson and Garry Brown:

Zac, you’ve said that Raven and Zatanna are at the heart of this story, but they weren’t mentioned in the initial pitch and are featured less prominently on Garry’s cover than Vampire Batman. Given that they’re the most important characters, why have they not been more prominent in the marketing?

For all of them:
Did you feel the need to make the story or artwork with as wide an appeal as possible in order to try and win votes or did you not consider that at all and just made the story you wanted to make?

For Zac & Garry:
Suicide Squad Dark is such a great world that can go in so many different directions. How did you pick the characters you would include in this?

Zac Thompson:
When DC is in as deep of a state of making Batman heavy stories, what is going to make Vampire Batman different from other elseworld adaptations
Kenny Porter:
Will we be seeing any Tim Drake Conner Kent team-upping?
Jahnoy Lindsay:
How important is panelwork within your storytelling?

I’m down to read either story. Just saying.

For All of them.
Is doing a pitch for this promotion different than how you normally pitch stories and comics, and if so how?
Hope they publish both of them.

Can Superboy and Nightwing be linked?

For the Suicide Squad Dark team:
-Why did you guys want to use the magic/horror Earth in particular?
-Was Batman chosen to help boost your odds of making it to the final round?

-If you’re someone who isn’t a strong fan of the Suicide Squad what would you say makes this book different from previous Squad books?

For Superboy:
-Conner is in a tough spot right now with a character who came after him becoming Superman before him, which was a fate Conner thought was his and seemed to be preparing for. What do you guys see as Conner’s hook/appeal in a world where Jon also exists?
-Why send him to space?
-What would you guys say is the tone of this book? The pitch feels like it’s going to be a serious take in the vein of something like Tom King’s Omega Men (which I loved), is it a serious character study? More fun/action-packed?
-Love Lindsay’s art so I’m just going to throw it out there that as much as I enjoy Kon’s 90s pink outfit I also do think he needs a new modernized costume and would love to see Lindsay take a stab at giving him one

For zac Thompson
Which universe is vampire Batman is from? Also what universe is this plastic man from

For Kenny and Jahnoy: What can you say about the Cosmoteers? Are we going to see different backgrounds and identities, alien or human, with this team?

Will these stories be cannon to the main universe, or are they their own separate stories?

Note: These questions are specifically for the creative teams behind Suicide Squad Dark and Superboy: The Man of Tomorrow.

Any questions asking about the processes behind the Round Robin and the voting structure will be removed.

Is everyone on the squad here forced or are their any volunteers?

I thought it was interesting that the Dominators were picked to be the villains of his book. They have a (future) history with his friend Impulse, but is there a specific reason they were chosen here?

To Zac Thompson and/or Garry Brown,

How prevalent is Plastic Man in this story? I see him on the promo cover and it gets my hopes up of all the cool forms he’ll take. I hope you’re not busting my chops.

Question for Kenny Porter and Jahnoy Lindsay - are there any Superboy books you recommend reading to see more of what you’re shooting for in this book?

Is it difficult to write a team with members who can do almost anything. Zatanna and Raven are virtually limitless, I belive you mention on Twitter their is a parasite dampening the teams abilities

For Zac Thompson:
We all know that Sinestro is a cosmic villain of DC Universe. So why did you choose him as a member of Suicide Squad, an earth-based team? And what do you plan to do with he to fit in the team?