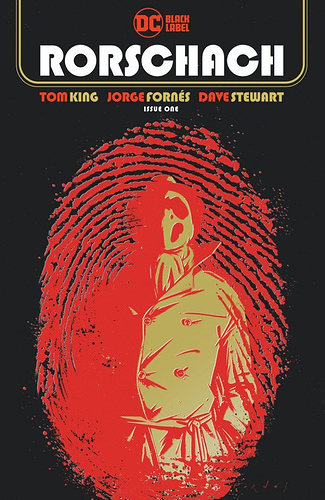 It’s been 35 years since Ozymandias dropped a giant interdimensional squid on New York City, killing thousands and destroying the public’s trust in heroes once and for all. And since that time, one figure in a fedora, mask, and trenchcoat has become a divisive culture icon. So what does it mean when Rorschach reappears as an assassin trying to kill a candidate running against President Robert Redford? Who is the man behind the mask, and why is he acting this way? It’s up to one detective to uncover the true identity of this would-be killer—and it will take him into a web of conspiracies involving alien invasions, disgraced do-gooders, mystic visions, and yes, comic books. Writer Tom King joins forces with artist Jorge Fornés for a new miniseries that explores the mythic qualities of one of the most compelling characters from the bestselling graphic novel of all time, Watchmen.

Feel free to express you excitement for these books or to talk about how much you’re enjoying reading them. but please don’t begin any spoiler conversations until Saturday, 10/17/2020.

Picked up issue #1 yesterday but curious - should I read Doomsday Clock before I read this or are they unrelated?

It seems like they’re unrelated. They do briefly name-drop Oklahoma, which implies that this may have the HBO Watchmen show in the same continuity. So if you haven’t seen that yet I probably would, because they do some interesting things with Rorschach as a concept that I think will probably be in play if that is the case.

Having now read it I caught the Oklahoma and Redford references so glad I watch the Watchmen series as this is clearly set in that world and time.

I’ve seen the Movie and watched a couple episodes of the HBO Series, but this is going to be my first real Watchmen experience.

I enjoyed the book.

Not having a whole lot of background I can’t form an opinion yet, but future issues WILL wind up in my “Will Read” pile rather than my “Will Read When I Retire” pile.