Roll For It! Snowball Fight!

A snowball fight has broken out and you don’t know what side to pick! Think on it no longer - everyone’s favorite robot, Kelex, has recently been calibrated to tell you exactly what superheroes will flock to your side and which supervillain will engage you in battle (disclaimer: DCUI is not responsible for any mental anguish you may experience if you roll your least favorite characters).

Match your number to the below lists to discover what the teams are! The first two numbers are your teammates. The last number is your villain. If you get a duplicate number, you can roll again, or just pretend there’s some funky time travel going on.

Feel free to let us know how your team would take down your mystery villain! 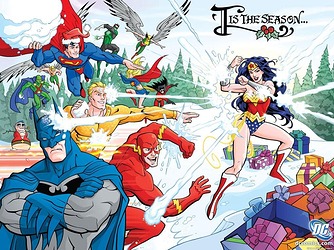 Hawkman would fly to the bahamas and get some milkshakes/drinks for our team (Me, Hawkman, and Zatanna). I’d watch some Smallville. Zatanna would look at Joker and say “Kconk mih tuo htiw wons!”

Then, we’d enjoy some great drinks and binge Smallville!

Well, clearly first Shazam is totally falling for Cheshire’s seductive wiles. A single “hey, baby” and he goes all awkward at the knees, and should consider himself very lucky that he is only being bombarded by giant snowballs instead of being killed with one finger.

Second Shazam sees this, panics, and creates a thundersnowstorm. The magic lightning bolts, of course, have no effect on any but the largest balls of packed snow, resulting in lots of property damage and swiss cheese snow banks. Since Cheshire is slinging her pre-formed giant snowballs, these get pierced by the lightning, resulting in a stack of them eventually entombing second Shazam in a hilarious amalgam of Michelin man and snowman.

I, clearly, am defended not at all, and continue to be pummeled by snow.

Hello! I am Kelex. I can assist you with matters like community features and more. To find out everything I can do, say @kelex display help.

Won’t @MatthewHecht be jealous, I get to hang out with Shazam, Starfire & Hawkman!

Starfire and I vs Deathstroke. Who will win?

Nevermind, I didn’t get Hawkman, it’s me and Shazam vs. Darkseid & Sinestro! YIKES!

Green Lantern and Captain Marvel (or Shazam if you prefer) against Sinestro! I am guessing Captain Marvel/Shazam got invited to the Green Lantern Corps Christmas party and Sinestro crashed it! Our power rings may be useless against yellow, but Sinestro isn’t immune to snowballs!