I did this 3 years ago as a kind of tribute to everyone who’s taken on the mantle of Robin. 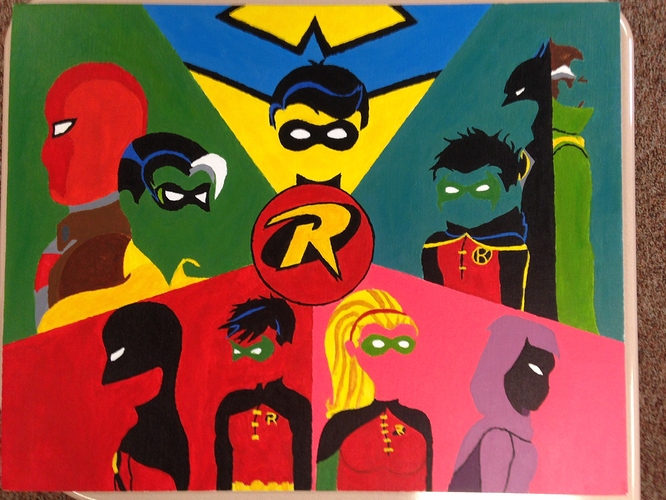 Awesooooooome! I love this!

I really like how you incorporated each Robin’s persona into the artwork, it looks great!
-M

It looks super cool, and welcome to the community!!

this is a very unique piece of artwork and i really like it! i love the robins and i love what you did with each Robin and what they grew up to be!!

Welcome to the community, absolutely love this!

Awesome work @dallinwallace.15839! Love the R’as/Batman back to back in Damian’s little window. Well designed

I love this beyond words! Thank you so much for creating this awesome piece, @dallinwallace.15839!

Thanks everyone for your kind replies!

That’s so cool!! Good job! I absolutely love the way you drew Tim! Looks so awesome. Steph looks really, really good too! Then the way you have half Batman, half Ra’s, behind Damian. Is that supposed to be showing off his heritage, or the two paths he has ahead of him? That he’ll either turn out to be Batman when he grows up, or the head of The League of Assassins? Either way, very cool!

@hellstromknight To be honest it was the double symbolism. Both his heritage and the double path ahead.

@dallinwallace.15839 Okay, that’s so cool!! And honestly better than what I was thinking at first with it being both.