Robin Revealed: Fun Facts About the Boy (and Girl) Wonder 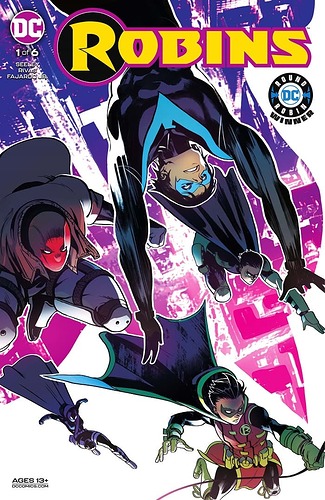 Since 1940, multiple heroes have taken on the mantle of Robin and served by Batman’s side. Now someone is targeting all the former Robins, causing each Boy (and Girl) Wonder to look back at their tenure. Robins is a new series starring Dick Grayson, Jason Todd, Tim Drake, Stephanie Brown and Damian Wayne as they ponder what it truly means to be Robin. Inspired by this new series (which was greenlit by all of you in our “DC Round Robin” tournament earlier this year), we decided to follow their example and rundown some fun and obscure Robin facts. Did you know Dick Grayson once ran a summer camp? What was Damian’s original name? Who was Robin the longest? Impress your friends with this trivia as we fill you in on everything you’ve never known about Robin!

Robins #1 features all five main continuity Robins getting together to discuss their time as Batman’s assistant. It might surprise you to learn that bringing all of them together is a relatively recent trend. The first time all five Robins ever got together was Batman and Robin Eternal #26 in 2016.

To learn more about the Boy (and Girl) Wonder, head over to DC Comics!

Have you picked up Robins #1 yet? Let us know in the comments!