I recently read robin year one and loved how it explored not only robin as batman sidekick…but him in school and his acrivities away from crime fighting. Are there anymore comics like tht focused on robin…doesnt matter which one though I prefer grayson.

You may enjoy the 2004 “Teen Titans Go!” comic, which ties into the 2003 Teen Titans animated series.

Well, these recommendations will be Jason Todd issues, but you’ll probably find them fairly similar to what you read in Robin: Year One.

Tim Drake Robin had a 183 issue ongoing not to mention several miniseries, tie-ins, ect. I’m a big fan of Tim.

Damian has had a couple comics about him, I believe, though I haven’t read those.

Nightwing has had his own series more or less from the nineties until today. The individual creative runs vary wildly in quality. He also filled in as Batman in most Batman titles for over a year around 2010.

Red Hood has had his own series more or less since 2011 where he teams up with some other antiheroes in Red Hood and the Outlaws.

Also, Young Justice and virtually all the Teen Titans have a Robin as their team leader. Most of these are great.

There’s a ton to read for Robin fans.

Cool subject, @TheBoyWonder321! Recently I read Batman and Robin The New 52 and absolutely loved it! It dives into Damian Wayne’s upbringing and relationship with Batman. It’s not Nightwing but if you’re interested in adventures with the different Robins, I would highly recommend it!

Robin Son of Batman (2015) is a good Damian Wayne storyline. There are a lot of great storylines for the 4 greatest sidekicks of all time. 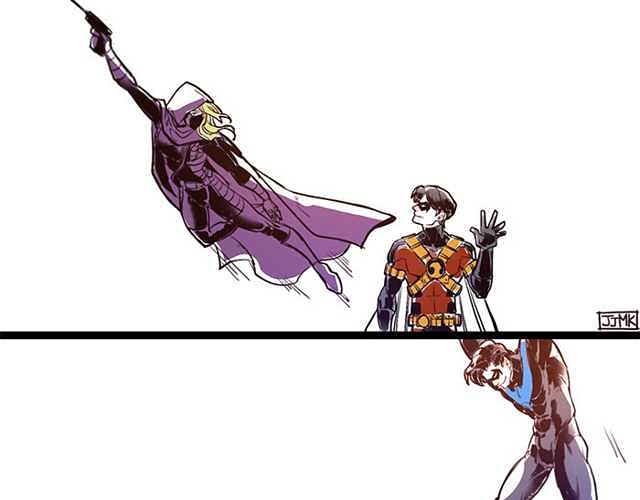 He ain’t me. I ain’t the artist. Support that signature in the corner.

I’ve been reading these, as well, after listening to an episode of Holy Batcast where it was recommended. I have always been intrigued by Batman as a father (since I learned about Damien) and the complications he has working around Damien’s background LOL perhaps just the father in me

Nightwing has had his own series more or less from the nineties until today. The individual creative runs vary wildly in quality

Which would you say, in your opinion, were his best and worst runs? Just curious - Maybe it will help me focus some of my Nightwing reading on better storylines

Different person, but I think most people will agree with me on this:

That gets you to the end of the 1996 series. I didn’t read the 2011 series, and I only read the first four arcs of the 2016 series, but I thought that was also pretty mediocre.

All things considered, I’d recommend reading up through the end of Dixon’s run and then skipping ahead to Wolfman’s, then reading through to the end of the series. All you really need to know to jump ahead is that Bludhaven got blown up for no reason at all in a completely unrelated series during the part you skipped.

@BatJamags You are awesome! Thanks for the detailed write up - that is very helpful. I have started Dixon’s run and have enjoyed it quite a bit. After I get done I will check out Wolfman and Tomasi (I like everything by him I have read up to this point). Bludhaven got blown up in Hush, right (the unrelated series you mention). I have begun the Rebirth series - I didn’t get too far before getting caught up into something else. I do want to check out the New 52 one as well. I have a coffee mug with him in the red suit after all so I should at least read the source material for that

It was actually destroyed in Infinite Crisis, though you also catch the explosion at the end of Under the Hood. Hush was a year or two earlier.

I actually meant Under the Red Hood lol honest - I remember the explosion wasn’t in the animated movie, but was in the book.

I actually haven’t read a ton of Nightwing. I’ve read many arcs, but before I got this DCU app, I bought comings when I saw a good deal on a series I enjoyed which means I have thousands upon thousands of comics, but not a ton of complete story arcs. Going to have to do something with those some day.

From what I have read, I agree for the most part with BatJamags. Chuck Dixon is a consistently great writer. Another plug here for his work on the Robin series featuring Tim Drake.

Grayson had an amazing run on the original Titans series (that’s Titans not Teen Titans) which heaving featured Dick, but she did do some weird stuff when she took over Nightwing’s solo series. I’m not quite as harsh as BatJamags, but it’s definitely got some horrible stories. I’ll actually say the infamous story that everybody hates I think actually works as a moving story. What doesn’t work is the lack of follow up and the writer’s own feelings about the story. However, I also enjoyed parts of her run. The One Year Later was the worst. Not sure about the other writers. New 52 Nightwing was pretty good though not exceptionally good. The series called Grayson is quite good from what I’ve read of it, and it’s generally well regarded. The Rebirth Nightwing has been fine from what I’ve seen.

Of course Nightwing is one of the central characters of the DC universe, so many of his most defining moments actually come in books like the Teen Titans, Outsiders and various Bat Family series.

Oh nice, @Gothamite.ZJN! How are you liking the series? It’s one of my absolute favorites!

@KeyFamily I really like the series. I enjoy Tomasi’s writing a lot and getting to follow closely the building relationship between Bruce and Damian is fun. I love how Bruce never shrank from the responsibility for his son when he found out. He owned it and took him in as he should. I think it’s a cool challenge to see him encounter since Damian is quite the handful. I also like seeing Damian interact with the other Robins. I need to also check out the series of Damian with Dick when he was Batman. I’ve read some of it but need to check out more

I loved those!! I met the artist a few times who worked on them. His name’s Todd nauck and he’s SUPER nice