Holy Milestone! This month, March of 2020, is the 80th anniversary of Robin! To celebrate, most if not all the clubs here on DC Universe (including the group I help run, the World of Bats plug plug plug) are collaborating to celebrate every single character who’s put the R on their chest! You can read more information about it HERE, but we’re not the only one’s celebrating!

Here’s the main cover and solicit: 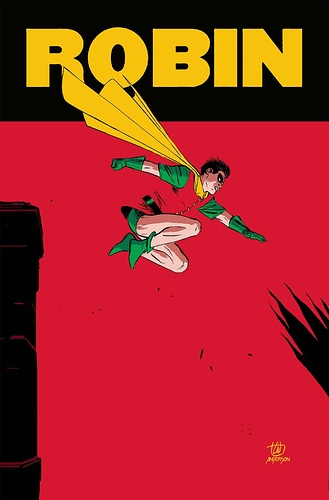 Much like previous celebratory issues, like Action/Detective #1000 and Wonder Woman #750, DC is releasing eight variant covers highlighting each decade of the character.

And there are likely dozens of retailer variants that I’ve yet to find. If anyone knows them, be sure to let us know!

Wow, way to leave Jason out. Dude’s getting upstaged by an elseworld.

@AlexanderKnox, are you going to stand for this disrespect?

If Frank Miller wants to draw Carrie Kelley, I ain’t gonna say no.

At least he’s in a pretty good forefront in the '10 cover.

I’d be more ticked off if Jay had been permitted to keep his original costume instead of having to don Dick’s hand-me-downs. Most of the time, the two look identical.

Part of why I like the New 52 costumes – each of them were unique.

And each of them were ugly.

I mean, we’re talking about a series of outfits that started with little green booties and scaley underwear, ugly is relative.

IT’S THE BOTTOM OF HIS LEOTARD! GET IT RIGHT!

I haven’t read anything about Carrie Kelly so I don’t know if she was a great robin or what but… Really? Carrie Kelly was Robin from February to June of 1986 (5 Months) and wasn’t even Robin in the New 52 (The story she’s in is also non-canon as well). Jason Todd was Robin from 1983-1988 (6 Years) and he was a Robin in the New 52. His story has been rebooted before but he is a CANON character And the 80s cover of Robin gets Carrie Kelly? It’s extremely annoying to have an important character shoved to the side repeatedly like this.

I think it’s because generally the two seminal Batman stories of the 80s are often considered to be either Dark Knight Returns, or Death in the Family, and since highlighting the book where a Robin gets beaten to death with a crowbar doesn’t quite jibe with the whole celebratory nature of the issue, they went with Returns.

ROBlN: A CELEBRATION OF 80 COMPOUND FRACTURES

Very impressive list of artists etc. looking forward to this one for sure.

That’s a very good explanation actually. Never thought about it that way.

Bumping up this thread because it comes out TOMORROW!

If any of you guys pick it up, tell us what you think.

I am SO excited. Getting at least two covers - Steph’s, naturally, and the Putri cover with ALL the Robins. Might get Tim’s, too, and am tempted by Lee’s.

I’m getting the Tim variant (well, I should be…I may have put my order in for that a bit too late, but oh well) and I’m pretty excited for it

I wanted the Putri cover so bad, but missed all the preorders!! Gonna try my luck scouring the web later. Fallback will probably be Lee’s…

Just finished reading it. I’ll probably post my thoughts on the individual stories when I get off work, but there was hardly a bad story in here.

Agreed! I thought Steph’s story was really delightful - the damsel in distress on the railway tracks thing was really funny, especially in how it was subverted. Damion Scott’s artwork was especially great - a new look for Steph, even though it’s the same artist who designed her Robin look!

The Grayson story was another big highlight - the same kind of formalism and humor that made the original run stand out, plus Janin and Cox together again!

Tynion’s Tim story was a really cute prologue to his Rebirth run, and actually had the four boys interacting, big plus from that.