Road to 5G begins in May! Everything you need to know!

I have seen san updated listing of that timeline. After Blue Beetle debuts they inserted Blackhawk Assembles Crew. I can’t remember any of the other changes.

I made a cleaned up version of the timeline at one point adding all the stuff that fans had been able to deduce from the blurred image. I believe a few additional things were clarified after this but I don’t think there are any actual errors.

Please note: This is not an official image, but a best guess based on the blurred image we got at one point, and things might have changed slightly since that image was released. 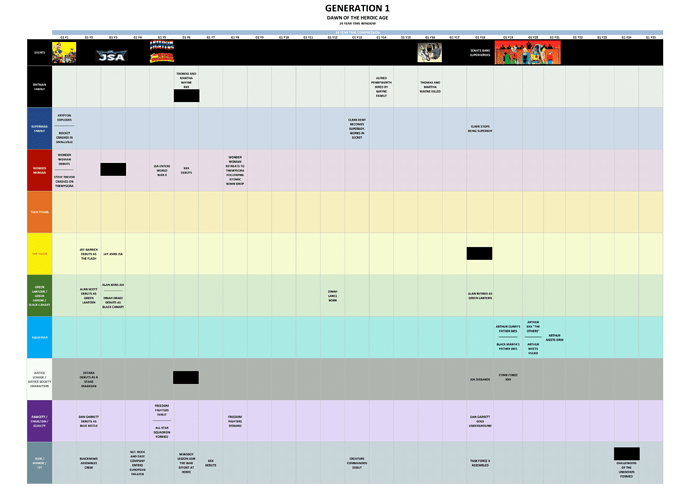 @Tenzel Do you mind if I add this to my developing 5G wiki?

Just remember to point out that it is not an official image, but best guesses based on a low resolution image from DC.

Sure. Won’t be able to do it until tomorrow though.

I felt like DC Rebirth was the perfect reboot and DC muddied it up pretty quickly. I’m not sure about 5G but I’m willing to give it a shot.

I’m not opposed to change and new things (i.e. changing the people under the masks/costumes)… but I just feel like reboots are happening way too often recently. It used to be something special, only happening every few years. But now it happens every few years. The New 52 in 2011, then Rebirth in 2016, now 5G in 2020? Too much too soon. Sales for 5G are going to start out decent: everyone is going to get the first few issues because they’re collectors items. Then sales are probably going to start to decline. My fear is that when they start to decline, DC is going to do yet another reboot, or reverse course. It’s just hard for some people to keep track of and keep up with. I’m just now catching up with The New 52. I haven’t even read anything in Rebirth, especially since a lot of it isn’t on DCU.

I take it you haven’t glanced at Marvel? Also both New 52 and Rebirth are actually around the same length of time. Both being 5 years.

5 years isn’t enough. Zero Hour was more about organizing than completely resetting everything. So, dismissing it as a total overhaul we had the same characters from CoIE until Infinite Crisis. 20 years is good. 5 is not so great.

Nope, I don’t read Marvel. Never really been interested. But regardless, whatever they do shouldn’t matter. If they reboot every year, that doesn’t mean DC should. @Kon-El seems to agree, 5 years just isn’t enough time between reboots.

Maybe this is something that DC’s done actual research about and they have an actual strategy. I doubt it, but it’s conceivable.

One of the old DC editors in the sixties, I think it was Nelson Bridwell, had a mantra.: you have to retell Superman’s origin every five years because you’ve got a whole new generation of readers by then. That may have been true back then when comics were still considered “just for kids.” That has always seemed to be the philosophy of DC. I don’t know if anybody has actually done a study.

I would say, every 10 years would make more sense.

Personally, I don’t see the need for reboots at all. Focus on the present and move ahead. Make people interested in the characters in the moment and don’t make it so that you HAVE to read decade-old books in order to understand them.

Five years does seem like a short time, but I also understand the theory that a big chunk of the readership turns over in that amount of time. But more than that, I’m not sure this really will feel like a reboot in the same way a lot of them have been. Like, if Luke Fox is taking the Batman mantle, it’s not because he’s literally replacing Bruce Wayne in history or something like that, it’s because he’s inheriting it from Bruce. So, presumably, some version of most of the prior Bruce stories still happened and will need to be incorporated/explained/recapped in some way. It sounds like it could be more like a Batman Beyond scenario, but for a wider swath of the characters. Obviously, we’ll have to wait and see, but I think it could be cool to see some of these characters actually change and develop in a more permanent way. Also I might be the only person on the planet who is excited to see more Captain Boomerang, Jr., so there’s that

Right that’s what is interesting. I like to think about it as the timeline being fixed to bring stuff back and be more clear to a general audience. It’s also about continuing the stories of rebirth but indicating this is a turning point in the DC story.

5G is a weird mix of the two. It is a soft reboot in that stories continue to move forward and past titles WILL matter. However, the whole continuity is changing.

However New 52 is a hard reboot which means nothing before it matters.

Except where it did, of course

I’d argue that one of the problems the New 52 faced was the fact that despite it basically being sold as a hard reboot we still had books like the Green Lantern ones actually continuing the story from the pre-Flashpoint era which considering the fact that most of it could no longer be part of current continuity made for an awkward start.

That’s a side note though. While I question some of the decisions made for the new timeline (at least what we’ve seen of it) I think it could be interesting to see how they are going to do it.