Road to 5G begins in May! Everything you need to know!

I need A LOT of details from generations to have any confidence in 5G. I’m just hopeful it will be better than people currently think.

This makes my stomach hurt. I’ll try it, but I see my pull list shrinking.

I am so much looking forward to this, I’m so ready and I try to keep it positive and just have fun, I either like it or not and that’s it for me, for me this is just entertainment. New 52 brought me to comicbooks, Rebirth sparked my enthusiasm and this just have me exited for the future.

I’m willing to give it a try, but the names thrown out as the people being the new DC heroes inspires little to no interest for me whatsoever. I may end up reading books from every generation but 5.

Most of the names don’t have a lot of history which is part of the frustration. No one is like YES Captain Boomerang Junior!!! (some like Jon Kent taking over but that’s it). When the main green lantern hereos of Rebirth were Baz and Cruz they were relatively unknown. Now they are favorites. Point is 5 years from now, Captain Boomerang Jr. could be well liked but he doesn’t have much history with which to excite people. Instead the only logical reaction is WHY ARE YOU DOING THIS TO MY FLASH?

(some like Jon Kent taking over but that’s it)

I don’t even like that and I can imagine that won’t be liked by anyone – I mean, fans are already pissed about aging Jon up to be a teenager, can you imagine the backlash to even miss his teenage years?

I think Conner Kent would be a better candidate – gives him something new, especially with Jon kind of taking his name.

Key word being SOME. I want more of his 10-17 period years, BUT Bendis ruined that…

Is this an attempt by DC to say "Most everything is in continuity, it just happened in different generations. "? If so great! Just pick the generations you enjoy and dig in.

But if not then I’m confused

Didio said “everything counts”, and I find that–worrisome. It can’t all count, not in a single continuity. If they’re going to pick and choose, I worry about the ones doing the choosing (like Didio himslef), and why they’re choosing it.
I’d like to have hope, given what was revealed last year with their partial timeline reveal, but they keep disappointing me.

I’ll never like what happened to Jon Kent. That ruined (comic book) years of storyline and just summed it up in a rather disappointing way. He was a good kid, he didn’t deserve to be tortured for 2 years by a writer and then have a fourth of his life get skipped. I was looking forward to seeing him grow.
There is a lot of stuff that I am not really looking forward to. 5G sounds odd-putting. Having Luke Fox become Batman, really has no meaning or weight behind it. To be fair though, having an African American Batman would be cool. But he doesn’t have the same drive as Bruce or any of the Robins, Batgirl, or Batwoman. They’ve been in the game far longer and one of them deserves there chance at the title. Damian would have been great, but there is a split fan base for him. Especially since Jon is set to become Superman. They are best friends. It kind of seems like he’s just leaving him in the dust.
Wonder Woman being the inspiration for every hero seems kind of weird and takes away from Bats and Supes a bit.
I am wondering though, is this going to be a major reboot? Rebirth started pretty well. But mistakes were made, namely things like Nightwing. They could just continue with Rebirth. See what happens over the next few years, instead of changing things again.

@behemoth This is a HARD reboot in a way. Like New 52, the continuity will be 100% reset. However, in a sense a lot of old continuity will be returning with specificity. They will say this exact event is continuity. Every crisis will matter, every death and revival will have happened. DC’s Generations is expected to say here is the timeline for 5G which will be a new timeline from all of rebirth. BUT the events of Rebirth will still matter and be a part of it. BASICALLY, every reboot ever, will be merged together into one timeline.

I started post Rebirth so same boat. I’m excited but hesitant. Generations needs to do a LOT of heavy lifting.

Maybe they’ll branch out and give some of the other Robins a chance to be Batman as well. Seeing Tim and Jason try in this new continuity would be cool.

The Robin 80th anniversary will probably have a teaser for the robin direction.

If we maintain access to the iconic heroes and continuing story lines therein, I guess I have only 1 real concern - will Black Label books become available as part of our library here? If not, then this community will become one of 5G interest only. Very curious how this aspect is intended to work.

Its obvious that this is a move to entice younger readers who are not as entrenched in DCs current continuity as more experienced readers. But they need to be very careful with this as the money for comics, which have become very expensive, remains in the pockets primarily of older readers. These readers are also the ones more likely to buy hard copies, another goal of DC.

We’ll see what happens, but I think they’re going after the wrong problem. I don’t believe content is the issue. I believe it to be the steadily rising cost of comics to the point of being near prohibitive and that is not a problem that the comics industry is ready to deal with yet. They need, instead, to find a way to make physical copies desirable and cheap enough for those with smaller disposable incomes.

Imo, 5G is doomed to fail. But I hope I’m wrong and DC has this figured out right so they can retain their current audience AND bring a new audience on board.

My hope is that these characters will be handled well. No ONE wanted a Jan Foster Thor until it happened and now ALMOST EVERYONE wants her. Maybe that will be the same. They have an oscar winning writer rumored on Batman (John Ridley IV who wrote 12 years a slave). Also he’s been working with DC since 2018. He was supposed to release the other side of DC’s history, but it never came out. My theory is he got asked to do something bigger for 5G.

I hadn’t thought about the Black Label problem. Where is that content going?

My hope is that these characters will be handled well. No ONE wanted a Jan Foster Thor until it happened and now ALMOST EVERYONE wants her.

I hope so too, but this is apples and oranges. She was not a permanent replacement for the iconic Thor, but an added character (and a good one). Thor continued in the same timeline but without his hammer. And even that has been restored in the “War of the Realms” storyline.

In 5G, the new characters are actual replacements, not operating in the same timeline. Even if they are great characters they replace other, beloved, characters.

So DC becomes … something else. That may appeal to many and it may not. Quite the gamble. Meanwhile Black Label will be tasked with keeping hold of their long time fan base.

So what happens when DC sees that they are publishing too many titles yet again? I think that they are hoping to wean their more experienced readers away from the iconic characters and will make their cuts there. And that won’t work imo.

Again, cost not content will be their undoing if I see this right. The people with the money are the customers they will lose. The new customers that they obtain won’t spend like their older customers and will be more likely to move toward digital (another concern entirely that the industry is way behind on).

But again, we’ll have to see. This is all speculation on our parts until DC actually moves forward and we can base our observations on facts. My confidence in their ability to guide the corporate ship through these rough waters just isn’t there anymore based on their history of business decisions.

Bare with me. These are first thoughts.

On first glance it makes no sense

A teenager or young adult sees a DC movie in a theatre or by streaming.

Or they see the characters on CW

Kids ask their parents where they can get comics based on the cartoons they see on TV.

When they try to find comic books

they are hard to find

Only Bookstores with trades or Young Novel versions.

If they do find a comic book.with the character they loved

Location not convenient to go back to

No help in finding what they want

Stories hard to understand without prior knowledge

Stories that go on and on

Not based at all on the characters they loved in the videos.

Ditch the characters that the consumers know and love?

Replace them with new versions?

Why is the new timeline saying

The parent of Batman were murdered in the early 1950s

everything happened ?
All comic books are canon?

Why is AT&T / Warner Brothers allowing this?

Upper Management understands that the Intellectual property of Marvel.and DC comics is worth billions. But it is hard to make revenue out of it.

There will be comics based on highlights of each era causing interest in intellectual property not currently producing revenue.

Gain audience even at on a short term basis. No company plans long range anymore.

Young Adult Graphic Nobel as a gateway for younger readers.

So if non fan is looking for material

Didio is fighting at least some of this because his job depends on original content produced regularly in traditional non digital.format, even though the high individual price of these comics is unsustainable

The state of the DC Reprints 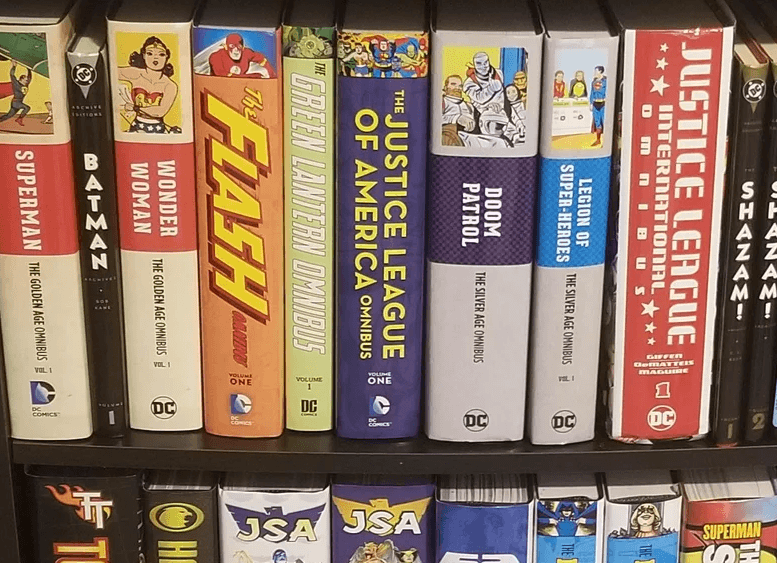 Our much maligned inspiration, Bleeding Cool, recently wrote about DC cancelling quite a few trade collections of older material, which they claim is inexplicably not selling as they go further along with the numbering and consecutive years...

But with a big change.

The Generations timeline according to Bleeding Cool