When I was a kid, I really enjoyed reading back issues of The All-Star Squadron by Roy Thomas. The book is about FDR drafting every superhero and masked man (or woman) into a fighting force to help win World War II. The book ended up being pretty influential for my love of DC Comics and the legacy of superheroes.

I’ve decided to revisit it because: 1) I’ve never read all of it. 2) A lot of this Golden Age stuff has been popping up in Stargirl. 3) It seems like the Golden Age will be making a big comeback to DC comic continuity.

I’m, of course, starting with All-Star Squadron #1. This post is, more or less, going to be my annotations of it. Spoilers below, so stop reading if you haven’t read All-Star Comics #1 yet and intend to.

It’s important to note that All-Star Squadron starts in the Pre-Crisis on Infinite Earths version of the DC Universe. That means this story takes place on Earth-Two where the Golden Age counter-parts of Superman, Batman, Wonder Woman, etc. continue their adventures. So, don’t be confused by the doubles. They’re just the 1940’s versions of the characters you love.

This story takes place on Dec. 7th, 1941. That, of course, is the day that Japan attacked Pearl Harbor and signaled the official beginning to the United States’ involvement in World War II. Knowing Roy Thomas like I do, I believe that this story is partly intended to explain how Pearl Harbor could happen in an America with superheroes. Why didn’t our heroes prevent this? Here’s why. 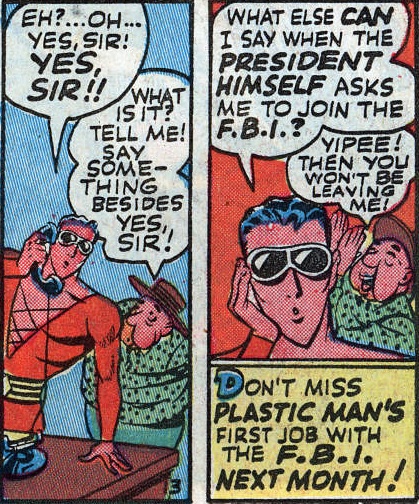 Plastic Man Joins the FBI419×504 151 KB
Of course, this story was published well after Pearl Harbor with a cover date of April, 1943, so this would be a slight retcon.

After being unable to locate the JSA, Hawkman and Plastic Man turn on the radio and find out why. The Flash (Jay Garrick), Green Lantern (Alan Scott), and Wonder Woman have been subdued and carried off by Solomon Grundy. The weird thing about this is Grundy did not first appear until All-American Comics #61 in Oct., 1944. Another slight retcon or something more? Meanwhile, Superman, Batman, and Robin have been kidnapped from Gotham City by Professor Zodiak who did not appear until All-Star Comics #42 in Aug., 1948. Starman, Sandman, Johnny Thunder, and Thunderbolt mysteriously disappeared fighting Sky Pirate who, once again, did not appear until Green Lantern Vol. 1 #27 in Aug., 1947.

That’s when Hawkman relates to Plastic Man that he just returned from a battle at the Lincoln memorial. There, Hawkman, Doctor Mid-Nite, and The Atom battled The Monster who they did not recognize because he does not appear until All-Star Comics #20 in March, 1944. Why is this happening? Why are all of these villains from the JSA’s future battling them now? The Monster gives a clue before fading into thin air. Before he disappears, The Monster says, “Degaton” (some of you out there know what’s going on now).

Plastic Man and Hawkman decide to cut their losses and meet with FDR, but they are then attacked by King Bee (first appeared in All-Star Comics #18 in Sept., 1943). King Bee alludes to being defeated by the JSA before and, of course, Hawkman has no idea what he’s talking about as it hasn’t happened yet.

We change scenes to find The Shining Knight flying his winged horse Victory over an active volcano. Spotting signs of a camp below the volcano, the Arthurian knight flies down and meets geologist Danette Reilly (who is related to a masked hero who we will meet soon). Danette thinks something suspicious is going on, so they investigate and are attacked subdued by Solomon Grundy and Professor Zodiak.

When they come to, Danette and Sir Justin find themselves in chains. They are surrounded by Zodiak, Grundy, Sky Pirate, Wotan (who actually DID appear before 12/7/1941 in More Fun Comics in May, 1940), and the leader of this band of super-villains: Per Degaton. Degaton declares himself to be from the future world of 1947, which is true. He first appeared in All-Star Comics #35 from June, 1947. Per Degaton is a time-traveling villain bent on world domination, so his appearance should make this all fit together.

Next, we come to the attack on Pearl Harbor itself. We see the attack through the eyes of Ensign Rod Reilly and his former man-servant, Slugger. Rod is Danette’s brother and he is also the masked hero called Firebrand. Rod was, apparently, a Navy reservist and was pressed into service in Police Comics #8: 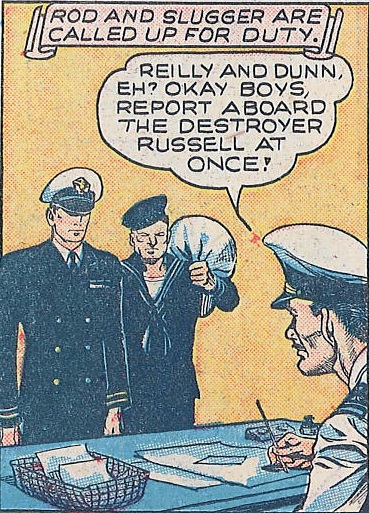 Firebrand joins the Navy369×513 132 KB
However, Police Comics #8 has a cover date of March, 1942. Also, Rod and Slugger were assigned to the Atlantic, so we may have some more slight retcons here.

Firebrand stopped appearing in comics after Police Comics #13 in Nov., 1942. All-Star Squadron #1 gives us some insight as to why. While attempting to help Slugger during the Pearl Harbor attack, a Japanese aircraft guns down at the two leaving the readers to wonder if this is the final fate of Firebrand and Slugger…

We end the story with a collection of heroes meeting FDR. These heroes include the remaining members of the JSA: Hawkman, Doctor Mid-Nite, and The Atom. The Golden Age Robotman (not the Doom Patrol one) also tags along with Plastic Man and the JSA. The last arrivals are Johnny Quick and Liberty Belle. This might bring us to our last slight retcon as Liberty Belle did not appear until Dec., 1942 in Boy Commandos #1.

FDR tells these heroes of the attack on Pearl Harbor. The president had actually been trying to reach the JSA earlier to ask them to stop Japan’s attack (which feeds into the theory that FDR knew the Pearl Harbor attack was coming ahead of time). The JSA, of course, had been subdued and kidnapped by then which is why the superheroes couldn’t help.

FDR then asks them to mobilize all costumed heroes into the All-Star Squadron to help the U.S. against the Nazis. The heroes agree and Plastic Man is to be their FBI liaison. The newly formed All-Star Squadron rushes off to defend the west coast against possible attack from Japan. We end our story with a cliffhanger as Per Degaton launches planes made up to look like Japanese fighters to attack San Francisco.

Will Per Degaton’s plot succeed? Why don’t the JSA recognize him when they fight Per in 1947? Will I even do another of these posts? We’ll see…

As you can see, Roy Thomas is the true historian of superhero comics which made him perfect to write this. I should dock him some points for messing up the timelines on Plastic Man, Firebrand, and Liberty Belle. But… A) This could’ve been artistic license for story purposes and B) It’s easier for me to proof check these things with the magic of the Internet in 2020. Still, odd slip-ups from a writer who is usually solid with his continuity especially since the first appearance dates of the villains played a huge role in the plot.

Considering your interest in this topic, I would recommend that you check out the JSA Book Club:

[image] Welcome fans of the Justice Society of America. We are a club dedicated to reading about the JSA and all the other teams and characters connected to DC’s very first Super Team and then discussing the stories that we’ve read. Your club leaders on this adventure will be Aurora and myself, JasonTodd428. We hope you have fun and maybe learn some things about the JSA as well. How to Join: Simply follow the JSA Book Club link and click the “Join” button and you’re in. You’ll now get regula…

It won’t make much of a difference to your enjoyment, but to clarify a couple of plot points, but the story begins in an insert in Justice League of America #193, though not in that copy, unfortunately.

Regardless, the series goes to some fun places, though eventually takes a pretty big hit with the loss of its own Earth and some important characters.

Yeah, I went looking for the preview in Justice League using DC Universe and was disappointed it hadn’t been digitized with the issue. Comics back then usually did a good job of summarizing what came before.