Let me get one thing out of the way. When it comes to my Top 10 Favorite heroes, Superman isn’t on that list. He for sure gets an honorable mention, but I can’t say I would put him up there. I love Swamp Thing, John Constantine, that part of the the Superhero world has always fascinated me. Of course, I have a few characters like Batman and Wonder Woman on there, but the last son of Krypton isn’t on there.

BUT it is also important to note that I have mad respect for Superman. Both as a figure in his own fictional world, but more importantly what he represents in our real world. And I enjoyed the first 2 movies starring Christopher Reeves. “The Quest for Peace” is one of those so bad it’s enjoyable films. I’m saying all of this now because I want you to know just what my mindset is going into this movie. I know this is a film that has divided a lot of people. Some love it, some hate it.

I think it should come to no surprise that, like with any other Snyder film, this has great visuals and action. As for characters, it is a little hit or miss. Some moments characters like Lois Lane and John Kent feel like real people. Other moments, they don’t. I’m not sure if it was because Christopher Nolan as a producer had some influence on how certain people should be directed in certain scenes or if has something to do with the script itself or even Snyder.

There is also that opening where we see Krypton approaching it’s destruction. On the one hand, I do kind of like this. I don’t really read Superman comics so I never had a good idea of what the planet itself was actually like. I get a decent enough idea. But on the other hand, this does feel like it could be cut down a little bit. Also, some characters just feel a little too stiff for my taste. Russel Crowe does a decent enough job, probably deserves to get a little more credit than whatever he is getting. Michael Shannon…certainly quotable! All jokes aside, he also does a decent job. I would even go so far as to say he is a little under rated and should get more attention.

And we get to Henry Cavill. Say what you will about any Snyder film, but he certainly knows how to cast the right actors for the right roles. I’m talking Gal Gadot, Ben Afleck (more on him in a BvS review), he does have an eye for these kinds of things. Cavill looks great and does a great job…with what he is given. The people who really love this film probably see the personality and character traits associated with him in the comics. But in this movie, we admittedly don’t get a lot of time to really get to know him. We learn his past, get an insight into what life was like as a child and can assume some stuff from that. But I don’t know, I feel like we could benefitted if we got one small scene where he interacts with someone. Doesn’t have to heavily tie into the main story, but let us get an idea of what he is like on a regular day to day basis. But like I said, for what he is given he does a great job.

Overall, I enjoyed this movie. Some areas are a little underrated and overlooked. Things could have been improved. But I enjoyed watching it.

I feel like we could benefitted if we got one small scene where he interacts with someone. Doesn’t have to heavily tie into the main story, but let us get an idea of what he is like on a regular day to day basis.

He destroys their trucks.

A scene that DOESN’T involve destroying a person’s livelihood

But…that is what Superman is like on a regular day to day basis!

(See the Golden and Silver Age stories for this level of pettiness.) 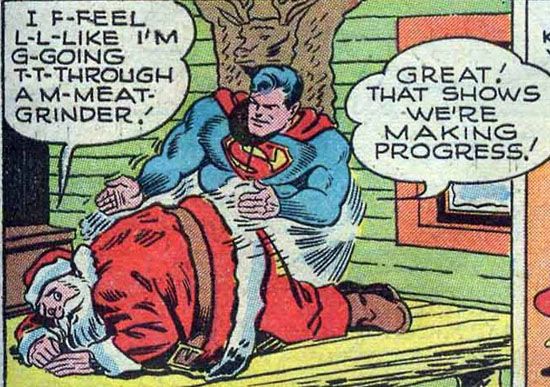 To each there own
My opinion : mos is the best cbm superhero movie ever made .