To everyone playing retcon poker, I see your bets and raise you Ben Reilly.

^^^ I think we have found our winner

Wait really? I’ve read all of early Robin and I haven’t seen the apartment- her mom was an addict who looked like her when they lived in the suburbs. Or was this in Batman?

I guess you could argue the shot of her apartment could have been part of a house, just framed tightly. But I’m almost positive they referred to her going to an inner city school, too, because Tim would dodge her when out with his private school friends during school trips.

Then Cataclysm happened, and suddenly she was in an area barely affected by the quake with a school that was safe. 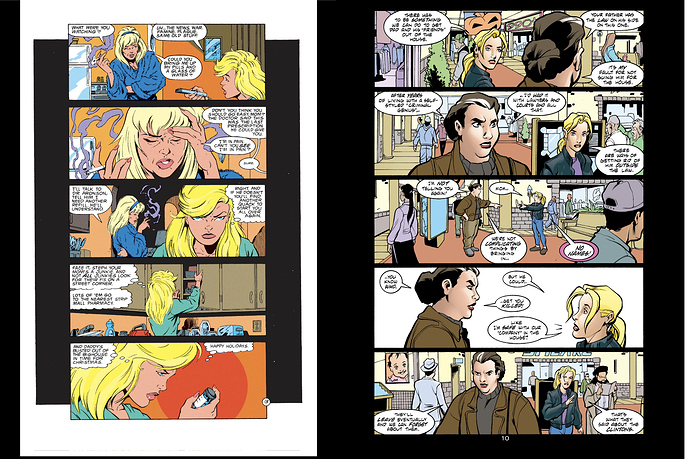 There’s a comparison, for anyone who’s interested. It irked me at the time because addiction obviously isn’t something to turn on and off like a light switch. If it wasn’t going to play a part in Steph’s story, I wish they hadn’t bothered including it. Her issues with her dad and the attempted rape as a kid were more than enough to fuel the vigilante lifestyle.

I’m trying to think of one that hasn’t been mentioned. Hmmmm.
New52 is obvious.
What else, what else, what else?
I was going to say what they made of Dr. Light in Identity Crisis, but that story was brought up already.
Let me think. Perplexing retcons. Unfathomably nonsensical retcons. The kind that make you wonder what was going through their heads, but not for too long, lest your mind give way to madness–

Well, shucks. I may have to think about this a while longer.

oh yeah, I wasn’t arguing on the addiction thing at all- that was very weird. (As was the recoloring of the hair and general change to her moms body type, but that happened to a lot of supporting cast then- Dana Winters hair color also changed. It was probably due to a change in writers, if I had to guess)

However, she was definitely always from the suburbs, according to these panels 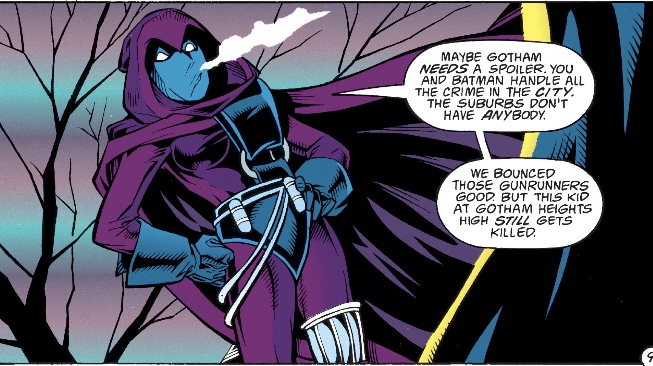 The school thing I believe your referring to was also from this issue (also, it was a funeral) or it was during the teen pregnancy thing, and in both cases he was avoiding her because he didn’t want her to recognize him as Robin.

I honestly can’t remember. It’s been a long time. Sorry!

Edit: was def prior to pregnancy, though. I remember him on her rooftop by then

I hadn’t noticed that when I read Robin, but it doesn’t surprise me. I don’t think Dixon was expecting to get a hundred-issue run, so Robin is pretty disorganized compared to his work on, say, Nightwing, which is really tightly plotted the whole way through.

I actually just found a shot of her house in 11, so I’m striking my suburbs part of the complaint

Oh! I didn’t know we could bring in Marvel retcons!
In that case I see your Ben Reilly and raise you one “Captain America is a member of HYDRA.”

On Ma and Pa Kent dying, it should be remembered that really them being alive was the first retcon. In the Golden, Silver and Bronze Ages, Ma and Pa Kent died shortly before Clark left for Metropolis to start being Superman. It wasn’t until about 50 years later when John Byrne revamped the character for Post-Crisis that we saw the Kents in any contemporary stories.

Also, on Mister Freeze, Snyder himself even admitted that wasn’t his best choice and changed it back in his run of All-Star Batman.

On Ma and Pa Kent dying, it should be remembered that really them being alive was the first retcon. In the Golden, Silver and Bronze Ages, Ma and Pa Kent died shortly before Clark left for Metropolis to start being Superman.

But even there, you can find a retcon. Originally, Clark started his superheroics once he moved to Metropolis, but the introduction of Superboy into the mythos led to a bigger role for the Kents. John Byrne removed Superboy from the timeline (except for that weird pocket dimension thing, of course), and he moved the Kents into the present to compensate for it.

True – and I think that’s part of why it feels like the Kents were always around, because they technically were in the pages of Superboy.

For me it’s Oracle Turing back into Batgirl…

I loved her far more in a wheelchair as Oracle. Especially now with the New 52 and post 52 reboots

I hated a lot of New 52 retcon, but this was definitely one of the worst in my opinion. She was so great as Oracle, and so much growth was lost by reverting her back to Batgirl.

I’m not so sure about that. She was a library media specialist before becoming Batgirl, and she clearly served some time as Oracle in the post-Flashpoint universe. Yeah, it would work better without the New 52 time crunch, but I still think it makes more sense than 4 Robins in 5 years.

Yeah, it would work better without the New 52 time crunch, but I still think it makes more sense than 4 Robins in 5 years.

Yeah, that was also really bad retconning in my opinion. Like, I understand having a little 9 year old running around as Robin doesn’t make as much sense today as it did in the 40s, but he was, what, 16 in the New 52 when Bruce took him in? I think it worked better when Dick was younger as Bruce related to him more in losing his parents at a young age, and that was a big reason Bruce took him in. Yeah, he can still relate to Dick at 16, but it just doesn’t hit as well for me if that makes sense.

There’s a lot I could complain about New 52, but as a huge Batman fan, everything they did to the Bat Family was really upsetting for me.

I think they could’ve made a retconned Grayson more workable if he was orphaned at around 9, taken in by Bruce, eventually discovered he was Batman, and soon started training after deciding he wanted to fight the kind of scum that killed his folks. It’d be a few years before his debut as Robin at 14-16 years old.

@Mr_Morbach I think that would have been the best option. It keeps the mirroring of Bruce and Dick’s origins while updating it to be more believable in the modern day.

I’ve toyed with the idea that Robin started out as more of a crowd control/search-and-rescue/lab assistant role and wasn’t supposed to get into fights. Also explains the gaudy color scheme.