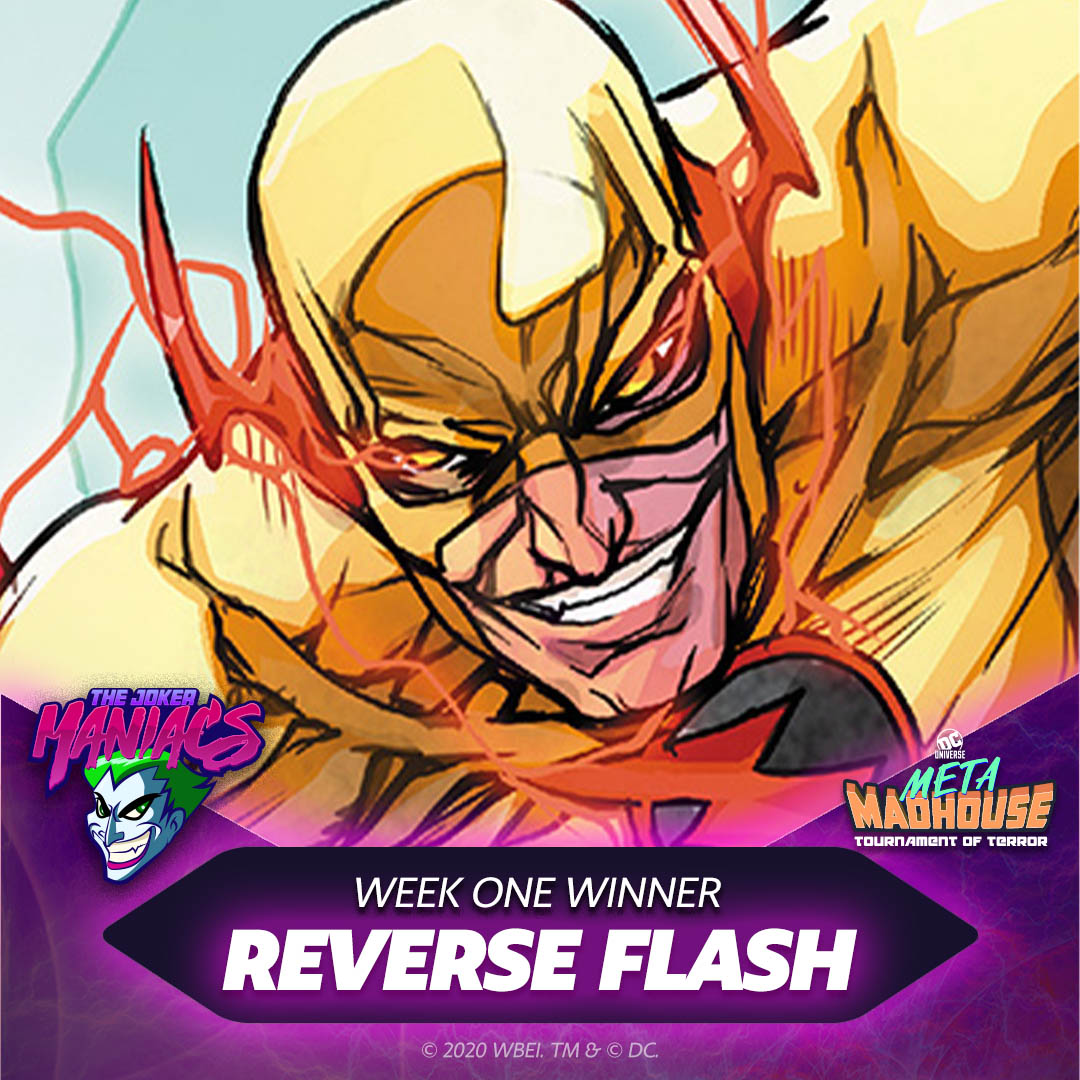 Be sure to tune into DC Daily to watch the official announcement!


The sinister glow of obsessed violet light begins to fade, and the winds of a maniacal speedster begin to die down. The tornado of dust settles- but only one stands amidst the rubble. Watch the official announcement of who won on March 12th's episode of DC Daily!

Who are you holding out hope for, and why? Sound off in the comments below!

If you want more ways to celebrate your Maniacs spirit, check out these other topics below, or wear your pride by updating your profile!

Here is my personal bracket breakdown

Harley over Two-Face: HQ has the clear psychological advantage here. While Two-face is ruthless, hhe historically can be thrown into an overly emotional state of rage through taunting. This rage reduces his accuracy and allows HQ to gwt in the one knockout blow with baseball bat or mallet.

Poison Ivy over Kite-Man: Certainly if we take HQ Animated versions of these characters, it comes down to Ivy being more ruthless than KM. She has a vine wrap around him, crushing his kite and immobilizing him and KM taps out.

Dr. Pyscho over Killer Frost: The doc can literally get inside her head and Frosty has a lot of baggage. The doc uses that to his advantage. Another tap out, while Frosty screams "make it stop. I don’t want to think about all these repressed memories.

Mr. Nobody over Anton Arcade: AA is not ready for the Dadaism of Mr. N. The ridiculing the absurdity of existence just is to much for AA. It is a battle of philosophical ideals and Mr. N takes it.

Mr. Freeze over Clayface: Victor is to laser focused and ruthless to lose to Clayface. CF is often, especially early in battles, guilty of showing off what he can do. We aalso know that the one way to take down CF is by freezing. Yes, CF could take on the form of Mr. F’s wife, Nora, in an effort to get Victor to pause, but, Mr. F is ready for that ploy and just takes care of business. A quick and decisive win for Mr. F.

Scarecrow over Victor Zsasz: Zsasz may be a serial killer but he’s no green lantern and cannot overcome great fear. One of Scarecrows gas bombs, which Zsasz has no super powers to avoid, fills the arena and Zsasz is done for. Of course this means Scarecrow has gassed all those in attendance too…but, you can’t make an omelette without breaking a few eggs.

Star Sapphire over Hugo Strange: One would think Hugo would have the psychological advantage in this one, but, Carol really has the upper hand. She has no love for Hugo but plety of love for Hal and wants to demonstrate her power. That focus won’t be broken by H.S.'s psychological ploys. Yes, his phsyical appearance belies his advanced, but still human, levels of strength and agility. However, psychology is his greatest weapon and in a one-on-one matchup, he doesn’t get the advantage over Carol. She encase him in a form of suspended animation and match over.

Reverse-Flash over Condiment King: The only problem for Thawne here is if he can keep himself from laughing so hard he trips and knocks himself out. However, Thawne is focused on advancing, he’ll keep his laughter in check until after the 14 nanoseconds this match is gonna take. (Thanks to @Aylex for pointing out I missed this matchup earlier.)

There is the breakdown, IMO.

Just curious: can we only submit votes once? Are we allowed to change votes if someone in the topic changes our minds?

Certainly if we take HQ Animated versions of these characters, it comes down to Ivy being more ruthless than KM.

Even if you don’t take the HQ animated series versions, there’s nothing Kite Man could do to win against Ivy lol. He has no special powers or abilities AKAIK, he’s just a guy who flies around on a hang glider. All Ivy needs is one blade of grass to take him down.

As if Crane would care about that! He’d probably relish the thought of all those people in terror.

There is the breakdown, IMO.

You forgot Reverse Flash vs. Condiment King, but… let’s be real here lol.

We have literally the same exact results for this stage of the tournament. Fist bump.

Because the votes represent a contest with a real prize, you can only submit your predictions once- they closed at 10:00am PST

As for voting on the brackets themselves, you can vote once a day- just like the polls!

Another question just to clear some things up: if a character gets revived by the Lazarus Pit, I’m assuming that means their opponent automatically loses?

Another question just to clear some things up: if a character gets revived by the Lazarus Pit, I’m assuming that means their opponent automatically loses?

That’s exactly right- it effectively reverses the results of the poll for that match-up.

And thanks for catching that I missed the RF vs CK matchup…now fixed.

Whoops, looks like you can’t copy and paste GIFs into DCU?

Good arguments all around, the only picks I disagree with are Killer Frost vs Dr. Psycho and Mr. Nobody vs Anton Arcane.

As absurd and confusing as Mr. Nobody could be I’m going to side with the embodiment of death and decay. Similar to Killer Frost, one shot should be all it takes to take down Nobody, granted I’m only familiar with the show version so I don’t know just how strong his abilities are.

The Doc has telekinetic abilities as well, so he should be able to stop KF’s attack and send the shards back at her. So, in my view, that gives him both the psychological and physical powers edge over KF.

True, but I assumed that Killer Frost’s powers allowed her to essentially flash freeze the air around her, making the extreme temperatures of the environment itself as a weapon

, it’s the debates that are the most fun part of MM.

I think on paper, Two-Face has the edge over Harley. Acrobatics and a bat/mallet still ain’t faster than a decently trained bullet. But HQ has the psychological edge.

I think as has been pointed out, KF is formidable and in terms of sheer power, probably has the advantage over Dr. Psycho. (I’d think Psycho is a bit of an upset, but more like a 10 seed taking out a 7 seed. An upset, but. Not a surprise if they did.)