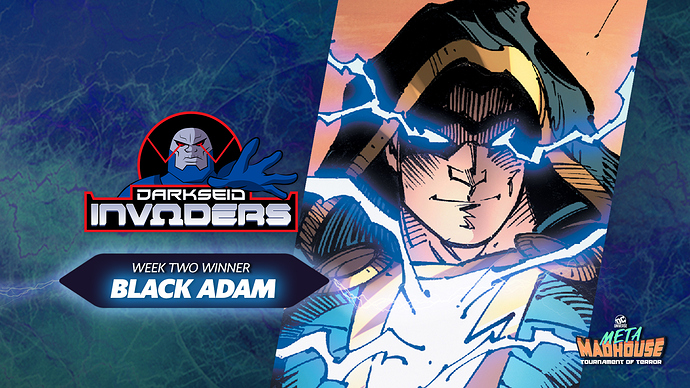 Watch DC Daily to watch the full discussion of the Darkseid Invaders Match-ups!


The thrum of electricity and pure power vibrates every surrounding electron. The Invaders have had triumphs, upsets, and victories- but ultimately, only one can invade the Championships against the Maniac Reverse Flash, A Mastermind of Lex Luthor's, and a Beast of Cheetah's.

How do you feel about our Lazarus Pit champion winning the whole caboodle? Sound off in the comments below!

If you want more ways to celebrate your Invaders spirit, check out these other topics below, or wear your pride by updating your profile!

My round of 16 breakdown.

Black Adam over General Zod: Zod really only cares about two things. Bringing pain to the house of El and world domination. He’s scared of two things. A phantom zone projector and magic. Black Adam has that last time…a lot. It’s Black Adams’s advantage and Zod’s weakness. Black Adam is known for exploiting any weakness he can find. He does. Bye-bye Zod.

Anti-Monitor over Parrallax: This may be the toughest match of the bracket. Parrallax comes from the yellow light. A light mastered from the weapon makers of Qward, who just happen to come from an anti-matter universe. The Anti-Monitor is a major force, but his blasts of anti-matter don’t effect a being capable of moving between positive-matter and anti-matter. The only advantage the Anti-Monitor gets in this match is a slim one based on the sheer amount of energy he can muster. The Anti-Monitor wins by a hair’s width.

Trigon over Blackfire: if Trigon can and has swatted Starfire away like a mosquito, her sister fairs no better against the demon Trigon. The match will last a while simply because Trigon is waiting for his opponent to show. It takes a while to realize the gnat flying around him is the opponent.

Doomsday over Superboy Prime: SBP is a bad dude. However, he is still just a kryptonian. Doomsday killed Superman and he learned from that battle. He’s a world killer. The ultimate weapon. This is a one-on-one fight. No Sinestro Corps ring, no Monster Society of Evil. He’s just clearly out matches. He punches above his weight class but his anger and rage leave him vulnerable for Doomsday’s attacks. The tournament is all about matchups and like Parrallax, SBP goes down. He puts up a heck of a fight, but Doomsday eventually gets the in the killer blow.

Ares over Hectate: The daughter of the gods, known for holding two torches. Also a sidekick of Demeter in the search for Persephone. She makes a good sidekick, but against THE god of war, Ares, she don’t stand a snowball’s chance in Guam on the Fourth of July. Area feeds on anger and death. The inky unfortunate element of his fight, is that Hectate isn’t even a snack for Ares.

Mongul over Despero: Sheer power over mind control. Mongul ain’t talking for Despero’s tricks, the only question is does Mongul take him out with one punch or two.

Sinestro over Lady Bleez: Lady Bleezwas given insight into what she had done as a Red Lantern. Even her rage at the Sinestro Corps she realized was better suited focusing in the nobles of her home world that betrayed her family. There is plenty of fear in her for what she realizes she has done.more than enough fear for Sinestro to exploit for the victory.

Doomsday over Superboy Prime: SBP is a bad dude. However, he is still just a kryptonian. Doomsday killed Superman and he learned from that battle. He’s a world killer. The ultimate weapon. This is a one-on-one fight. No Sinestro Corps ring, no Monster Society of Evil. He’s just clearly out matches. He punches above his weight class but his anger and rage leave him vulnerable for Doomsday’s attacks. The tournament is all about matchups and like Parrallax, SBP goes down. He puts up a heck of a fight, but Doomsday eventually gets the in the killer blow.

This was my reasoning too. Doomsday ftw.

Ares feeds on anger and death.

Yes!! This is the Meta Madhouse tournament. Imagine how juiced up Ares is with all these crazy fights going on around him. In the context of this competition, I see him being a fierce fighter.

Mongul over Despero: Sheer power over mind control. Mongul ain’t talking for Despero’s tricks, the only question is does Mongul take him out with one punch or two.

Again, we have literally the same exact picks for the Round of 16. Mongol’s got this.

Also, for those familiar with with the DCAU, a word of advice…never, EVER bet against Ed Asner.

While I know a little about Starro and not that much with Granny Goodness, I examined their abilities. Both have invulnerability and superhuman strength. They differ where Granny Goodness has immortality and other superhuman abilities whereas Starro has mind-control, regeneration, and a few more abilities. In Starro’s first appearance, who defeated Starro? None of the superheroes could, only Snapper Carr. That prompted me to give the Star that could also clone himself the upper edge.

I also selected another character that will lose, dang.

SBP vs Doomsday is one where @HubCityQuestion (check out his round of 16 matchup article in today’s News section) and I disagree on the out come of this match. IMO, SBP may have an advantage, but his rage also makes him vulnerable and if your are willing and conditioned to kill, you will take that opening, while a “noble superhero” probably wouldn’t. And as HCQ mentioned, Doomsday can never be killed the same way twice. It’s a knockdown, drag out fight til the bitter end. But, Evan being a bit of an underdog in this match, I think Doomsday’s conditioning to kill gets him the upset.

I definitely see your point here, @DeSade-acolyte. But while Superman was able to take out Doomsday with everything he had, Superboy-Prime’s assault in INFINITE CRISIS was an all-hands-on-deck situation. I think Doomsday has a very good shot at taking this, but I’m still giving the multiverse’s angriest Kryptonian the advantage.

And we disagree on Hectate vs Ares. She’s powerful but one on one Ares has to much knowledge in the strategy and tactics of war. He knows how to kill and is truly relentless. I’d argue that the other gods on Olympus were as much a hindrance to Ares and their historical inability to work with each other has always been an issue for them looooong before DC was ever created.

In a one on one, neutral site match up. Ares, while the underdog, in a sense he has the “home field” advantage. Tactics and experience win the day.

A tournament always has more than a few upsets and these are two of those few.

I see your point here as well, would be inclined to agree with you … IF we were talking about Hecate and Ares as represented in classical Greek mythology. But in Justice League Dark, Hecate is positioned as one of the ultimate magical threats in the DC Universe, greater than any individual god of an ancient pantheon.

And that is her Achilles heel (sorry…couldn’t resist

That’s certainly true against most mortal or even demideific opponents Ares faces, and definitely something I’ll be accounting for should he advance past this first round. But that’s a magical effect, and Hecate IS magic itself.

But even magic, certainly her magic and other “dark magic” (for lack of a better term, has an aggressive nature to exploit). It will still take violence, even if it violent magic to attack and defeat him.

It’s a shame really, if he was going against Star Sapphire, Ares would be in for a major problem.

P.S. our debates are one of the things I look forward to the most about MM. The articles have been great. I hope you’re having fun writing them.

That is exactly my Round

Not gonna lie, my dude: this is the most fun I’ve ever had at my job.

@DeSade-acolyte @HubCityQuestion I selected Hecate before the vote because her mystical abilities, but after examining Ares’s full capacities, her magic won’t be able to stop him. The more I think about it, the harder it is to tell who could win. Hecate’s greatest power will probably be reality warping, since Ares doesn’t have that, but Ares has the “popular vote”, claims to have precognition, cosmic awareness, and clairvoyance. If he could survive long enough to touch her, he could know her past battles in which she displays her power, and come up with a plan to win.

But, I am not too experienced with either.

Just based on my personal comics interests, I’m way less knowledgeable about the characters in this Darkseid Invaders round than the first round, so I just want to thank @DeSade-acolyte, @HubCityQuestion and everyone else who takes the time to post deep-dive posts on their match picks and why. I’m amused and enlightened, and you’re making this silliness even more fun more me. Hell yeah!

Having read the JL Dark/ WW crossover, I really think Hecate could take Ares, at least enough to get him imprisoned again.

I picked Starro over Granny Goodness. I don’t think I’ve ever seen GG in a fight herself, just telling orders at the Furies. I figure there’s a starfish about to slap itself into her face.

We have to remember that Doomsday killed Superman. Superboy Prime is lesser than Superman, ergo/therefore/hence Doomsday takes SP.