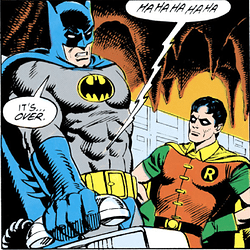 After 3 months of adventures (3 years if you were reading these books in the 80s!), Jason Todd of the Renegade Robins Club says goodbye to the 1980s run of Doug Moench. But fret not: Earth-One goes out with a bang as the entire rogues gallery comes out to play!

Many of the foes from previous weeks have returned, Jay! 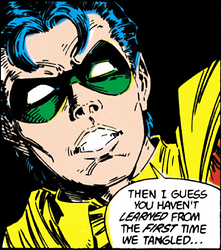 And as an extra bonus, here’s an article about the 1980s Doug Moench run! 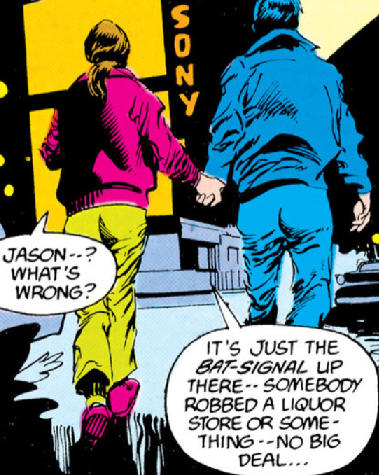 We will be checking out Jay’s time with the Titans two weeks from now, but a week from today, you can join Damian in witnessing the resurrection of Ra’s Al Ghul! 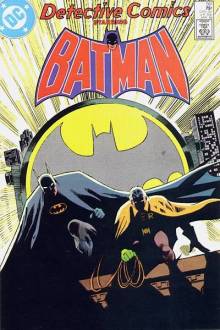 Before Batman was the Dark Knight, his world was considerably more grey!

If you know of any other good articles on the topic, please share them!

How did you feel about the new villains, Film Freak and the Love Killer?

Film Freak has a decent introduction – he has some fun, creepy/kooky moments like the references to Psycho and King Kong, and some of this crimes and how he evades our heroes are pretty clever, but dude is fated to be a C-list villain at best.

And does Love Killer even count as a supervillain? He just seems like a normal serial killer to me…wow that’s an odd sentence to type.

What did you think of the various character dynamics in the Two-Face/Circe arc?

Honestly, I was surprised to see that she would even come back after that initial Black Mask arc, so that was pretty cool. I liked the idea that Batman was wanting to try to cure Harvey of his illness.

The part I was a little “eh” on was the Batman/Catwoman split. I liked that it was amicable and that Selina didn’t suddenly decide to go supervillain again just because Bruce was being an evasive a-hole, but him being one in the first way felt like rather cheap drama. And it just kind of sucks that in the history of these two characters that it seems like these two can’t be together for longer than, say, a year.

How does Batman’s battle against his rogues here measure up to similar stories?

I absolutely loved #400, and part of it was the way that all the rogues were set up. I liked how they were organized and had a plan that forced Batman to use all his allies and everything in his disposal, both physically and mentally.

What did you think of the art in Batman #400 The Stephen King intro?

The art was overall excellent. There were a couple of names I weren’t familiar with, but man, seeing Bill Sienkiewicz doing Batman interiors alone was worth the price of admission, not to mention other amazing, classic artists like Joe Kubert and Brian Bolland.

The King intro was cool, though annoying in how they fitted it here on the service. Like, I get that this was printed at the time as a sort of front and back cover flap thing like with hardcovers, but the thing with those is that with physical media you can just move to the next part. Swiping from one side to the other on the tablet is a lot less convenient.

I’m just saying it would have been nice if they just placed the two pages together instead of putting one in the front and one in the back. Sometimes making things just as they were back in the day is more annoying than cool.

Which story from the 1980s Doug Moench run have you enjoyed the most?

Woof, that’s a hard question. There’s been honestly a surprising amount of good stories from this run, more than I initially thought.

Probably because it was my first introduction to the run when I read it for the Crisis crossover, I want to say the final arc with Nocturna was pretty great. The introduction to Black Mask was also really good, as was the crazy arc of Joker in South America.

And does Love Killer even count as a supervillain?

Hey, there was no SUPER in my question!

I liked how they were organized and had a plan that forced Batman to use all his allies and everything in his disposal, both physically and mentally.

You know, I was going to make a joke about how Dixon is no Moench but then I thought, Moench was writing one of the Bat-books at the time, wasn’t he?

How did you feel about the new villains, Film Freak and the Love Killer?

I thought Film Freak was the more interesting villain of the two and it was a lot of fun watching Bullock and Robin team up here. I’d forgotten that Bullock was a movie buff. I also loved how frustrated Jay kept getting that Bat and Cat were always one step ahead of him and Bullock. It felt like a real teen’s reaction to a parent’s love interest whose started to muscle in on activities that were once just things the parent and child did alone together. It also shows off Jay’s competitive streak which is something that is carried over into the post-Crisis version of the character.

What did you think of the various character dynamics in the Two-Face/Circe arc?

They were all interesting and well handled. The art really helped make them come to life. I really liked the Batman/Catwoman interactions the most out of the bunch.

How does Batman’s battle against his rogues here measure up to similar stories?

Well at least he didn’t get his back broken by the end of this.

That aside I enjoyed this particular set of fights.

What did you think of the art in Batman #400 The Stephen King intro?

The art was a crazy quilt of insanity just like Batman’s rogues are. I especially liked the art for the The Tempting. I also found it interesting that Ra’s was talking about how the Lazarus Pits effects on him were waning which is a direct connection to this week’s DWBC storyline. Its also ironic that the title of this story is “Ressurection Night” when the DWBC is covering "The Resurrection of Ra’s al Ghul this week. (nice timing that wouldn’t you say?)
The Stephen King into was interesting to read.

Which story from the 1980s Doug Moench run have you enjoyed the most?

My favorite was the Nocturna story but I also really enjoyed the Robin/Bullock team ups as well though those might not qualify as actual stories. Anytime Bullock and Jason team up is a good time for me.

Anytime Bullock and Jason team up is a good time for me.

Yeah, it’s a shame that this dynamic doesn’t carry over after the Crisis. Bullock himself largely disappears from the main Batman titles for a few years and instead becomes a member of Paul Kupperberg’s Checkmate in the late 1980s, leaving little room for Robin interactions.

I missed those interactions a lot once things shifted to post-Crisis. At least those pre-Crisis interactions got a nod in N52 in RHATO.

Really? Huh, I don’t remember any of that.

JT’s, sorry, I think I did reply to his post, though I’ve noticed sometimes that doesn’t show up. 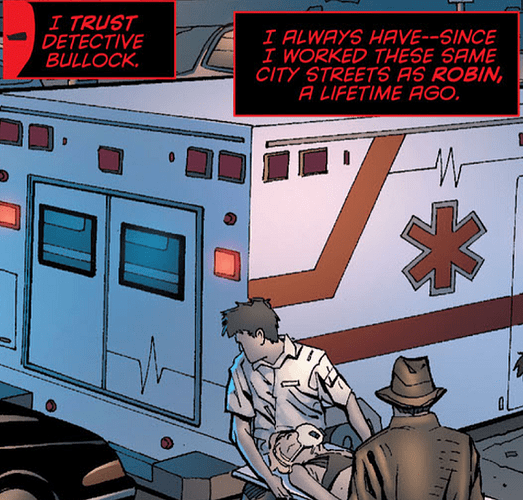