Which version do you prefer?

Part of me wants to be a hipster and say Disco Collar Nightwing, but honestly, I still think his blue costume with the arm-stripes that he wore from the mid-'90s up until he became Batman looks better than anything he’s had before or since. The red looks bland and edgy, and the stripeless animated series-style costume with the bird symbol is boring. The disco collar is fun in a retro sort of way, but a little silly. The black-and-yellow costume from the early '90s isn’t bad, though.

Personally, the AU suit or YJ suit is perfect for him, and, it’s blue!

Oh yeah, the blue costume with the stripes that go over his fingers will always be the best one.

Blue all the way! Red’s not bad some of the time, but I think it’s still a little too far and a bit of an eyesore for him to have all the time.

Definitely the blue with the stripe down to the fingers!

Blue Nightwing.
This is my fav Nightwing pic. It is my phone’s home screen and my laptop’s screensaver. 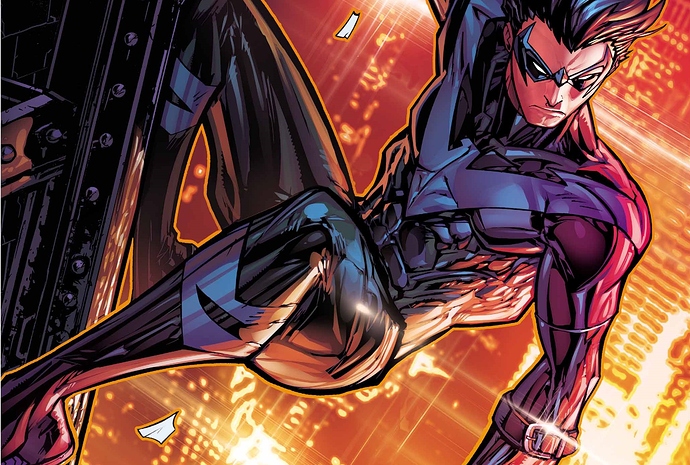 I think the blue helps him stand out better. Red seems to be a common color across the Bat Family, particularly with the Robins(former or otherwise), so it’s to see one with a different color scheme.

i prefer blue but the red ain’t bad

NIGHTWING deserves his own movie

Blue, but I did like how imposing he looks in red. It makes more sense for him to be in blue though, since he’s basically the opposite of Jason Todd, who has a claim to red.

Blue, but sometimes the blue looks a little too muted and I did like how vibrant the red was. I like how Injustice 2 gave Damian the red Nightwing outfit. It really fits him.

My favorite color for him is the Blue but, his Red costumes in The New 52 were really good and I have grown very fond of them. However, they would be so much better if they were blue!

Of course, we all know that Discowing is superior to all…

But seriously, personally I like red more, but I get blue is the more iconic color scheme.