It sounds interesting. Is it on DCU?

Each issue is semi independent

Read the summary of each issue

Or start with issue 1

Give him a try. I read them off the “spinner rack” when they were first released so I enjoyed it before the controversy. It was a great parody of the comics of the late ‘70s - ‘80s. I’m able to separate the art from artist who is a fallible human.

I will! I consider myself a Quentin Tarantino fan. Rest assured, I can separate the art from the artist.

I’m pretty sure I was one of 17 people reading it at the time, but supposedly one of the other 17 was Joe Quesada. When Marvel signed Nick Spencer to an exclusive deal, it was one of the rare times I’ve heard of where they specifically wrote in his contract that he could keep writing the book for DC, supposedly because Quesada liked it so much and wanted to see how it ended.

It’s not as humorous as Superior Foes or the Fix, but definitely quirky and some of Spencer’s earliest mainstream work.

Not a DC comic, but did you ever read ■■■■■ Planet by Kelly Sue DeConnick? It is a doozy.

Is that where it takes a turn for the misogynistic?

Turn? Nah. He just steers it off of a #$@&%* cliff. It is bizarre and extraordinarily offensive in my opinion. Even considering the independent nature of the title I’m surprised it kept going after.

Also, I’m starting to feel like an advocate here, but…

Gotta read Green Arrow by Grell and The Question by O’Neil. Start with Longbow Hunters. If you’ve already read that I have to suggest Moore’s run on Swamp Thing. It’s as close as you’ll ever get to Marvelman. You might enjoy V for Vendetta, but that’s a purchase read.

I have read and enjoyed all of those books. Mike Grell Green Arrow is an all-time great (particularly Longbow Hunters), and the O’Neil Question series might just be the best thing he ever did.

If you like Warren Ellis, try NEXTWAVE, Its a short series that ran under dark horse, and if you haven’t already, try Umbrella Acadamy by Gerard Way.

As I mentioned above, I absolutely LOVE Nextwave. It’s a comic that could very easily have not worked, but succeeded at every turn it could have faltered at. Plus, Stuart Immonen is a modern master. As for Umbrella Academy, it looks really interesting, but every time I’ve tried to sit down and read it I just haven’t been able to get into it. I have no doubt that the art by Gabriel Ba is amazing, however. 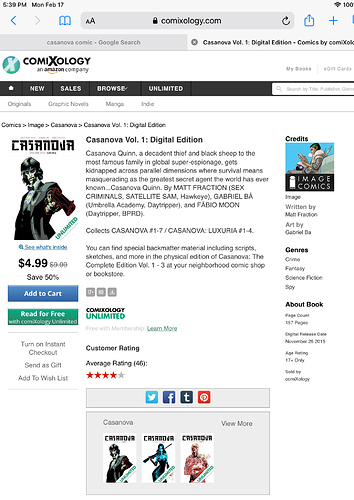 Umbrella Acadamy is a soild read, it is very much in the same vain as Morrison. but more random and weird, like his Doom Patrol run, I highly recommend it and the show on Netflix, The show, in my opinion improves apon the source material.