As I continue rereading the highlights of rebirth, I am sharing my journey here. This week is The War of Jokes and Riddles.

This instant classic has so many incredible moments. Its unbelievable.

What are your thoughts on this iconic story?

Zero Year or War of Jokes?

Also you can view the full highlight list and more in my 54 page Rebirth Reading Order. Go to Section 2) to see the list WITH LINKS!

INTRO AND MASTER THREAD BEFORE YOU READ MY ORDER, PLEASE DO YOURSELF A FAVOR AND PUT ON THE DOCUMENT OUTLINE!! View → Show Document OutlineIt’s time for the big 2.0 update to my reading order!! I’m going to have multiple reading orders all below.... 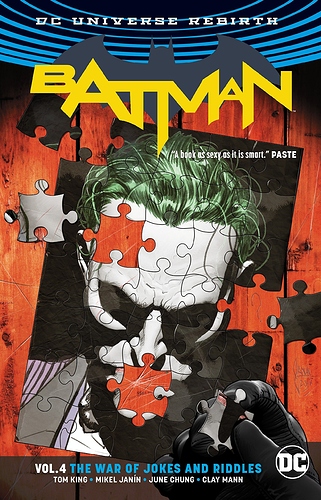 Was I the only one who hated this story? It’s the story of the Joker not telling jokes and the Riddler not telling riddles, because if they did that they wouldn’t be edgy. The Riddler gets an edgelord chest-scar, and they go to war for some reason. And somehow, they each manage to rally half of Batman’s rogues gallery to their sides even though neither of them is exactly popular (the Joker being an unreliable psychopath and the Riddler being a somewhat foppish gimmick villain who most of the others look down on). Then there’s the Deathstroke vs. Deadshot fight, which is gratuitous and bizarre, because Deadshot’s greatest ability is aim, while Deathstroke is an immortal super-soldier with a healing factor. I refer you to the last issue of Villains United for a more sensible fight between the two (namely, they fill each other with holes immediately, Deadshot barely survives, and Deathstroke pretty much gets up and walks away). Then Batman tries to kill the Riddler even though plenty of villains have done much worse than he did in this story without making Batman break his code. It’s to set up the “Joker stopped Batman from killing and he thinks that’s funny” moment, but that moment isn’t earned.

Sure, there are a couple good points. The dinner scene is actually clever. The angsty backstory for Kite Man’s catchphrase was unnecessary, but somewhat compelling. But the story is hot garbage. I already hated I am Suicide and I am Bane (long story short, they’re both full of plot holes and general pointlessness), but the Riddler is my favorite villain, so I decided to give King one more story to win me over before I gave up on his run. Needless to say, he didn’t.

I re-read WoJ&R last week and I think it reads better as a whole than it did in individual issues. The premise is somewhat goofy but I thought King did a good job of both delivering the epic story he set out to tell, and still subverting expectations about how the story would be told. The Kite-Man stuff is heartbreaking. Janin and Mann both did great work on the art.

Zero Yearis good too but far more bombastic. That was really the arc where Snyder shifted from a dark/ horror tone toward more outrageous, kicksplodey comics. Love love love the purple gloves and the steampunk costume.

@coco Absoultly. King definitely wrote it as a volume and then thought “Dang it, I have to break this into pieces”

@batJamags I’ve heard that response before and I think it comes down to “Do you get the core premise or not” I once read that the difference between a good story and a bad one is how quickly you notice the plot holes. In retrospect your comment about the Riddler and Joker making teams makes a lot of sense. However, the Riddler tells a bunch of great riddles! I think on the why of the war, it makes sense if you think about it. Both of them believe that they will be able to kill Batman eventually but realize only one can do it. So the Joker shoots the Riddler and the riddler pissed starts the war. On the Deadshot scene, appreciate it for the prose and the beautiful symmetry over analysing the minute details

“Zero Year or War of Jokes and Riddles?”

Zero Year in every way. Better story, writing and art.

The War of Jokes and Riddles was a bore for all but the last two issues of the story. It’s the only portion of King’s Batman run that I’m not a fan of.

I though the arc was overall pretty weak, and its a shame because I thought that the premise sounded cool. However, I loved Kite Man’s parts in the story; probably one of my favorite parts of his run.

Wow! I didn’t know it was this controversial!

Zero Year is definitely a better story, and I would not call this a instant classic or we are throwing that phrase around too loosely.

Dang. You guys seem to hate King! War of Jokes is WAY better than Zero Year