A few years ago I was extremely excited about getting a massive break from comics after the hit/miss New 52 and the very strange lead-ins to the end of that universe. I collected the main Convergence title which starred the over-used but not very interesting new Earth 2 characters (giant JSA fan who is still not really happy with what happened to these characters after Johns left his wonderful run) and a character DC tried to get us to care about named Telos (not so much).

I really didn’t know what the DCU was anymore and stopped collecting floppies entirely. Now here we are years later and decided to jump in and catch up on what I thought were basically fill-in issues during DC’s move to LA. Two-issue comics trying to be interesting by pitting worlds against each other… whatever. I reread the dull mini again, which still didn’t do anything for me.

But then I read some of the more interesting titles and I was sucked in. They are well written, well drawn and a done story in two parts with characters from eras mostly forgotten. After each two-parter DCU directs me to another story line and then another and suddenly i’ve read like 20 of these sotries and they are all magic.

I don’t want to tell you which to read because I am more interested in the ones you like. I was super surprised all over the place. Unlike many themed events, each writer hit the main beats: 1) a year ago heroes were in either Metropolis or Gotham during an important era like pre-crisis, pre-flashpoint, pre-zero-hour etc, 2) the city they were in was surrounded by a dome with zero explanation (Brainiac collected the cities) and plopped them on a mystery planet. 3) the heroes of the story have lost all powers and have made a life over the past year; since many don’t live in those cities they have basically left everything behind, 4) the dome comes down and there will be a battle for the life of the exisiting city’s existence between select heroes. 5) The enemy is from an elseworld or Wildstorm or Flashpoint or other alt Earth. There is some kind of earthquake for two seconds (at least there is consistency). From there everything gets very creative. Most of the stories I have read are self-contained and entertaining.

Try them all; I think you will be pleasantly surprised.

Awesome thread, @Constanteentitan (and very clever name, I might add)! We are reading and LOVING the Convergence series in our house! As you mentioned, the story is excellent and does a great job at showcasing all of the classic heroes without feeling too heavy. The real draw for me is the stunning artwork. I take my time with each page because it deserves so much attention with all of the fine details. Here are a few pieces that illustrate the dimension this series has to offer. Highly recommended read! 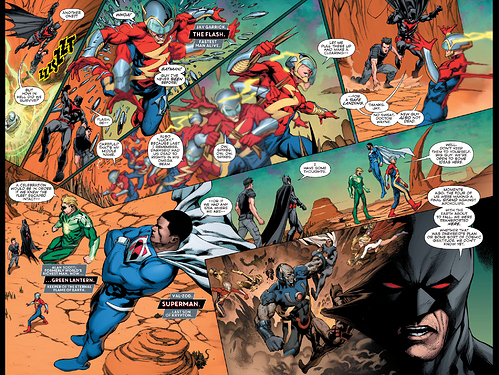 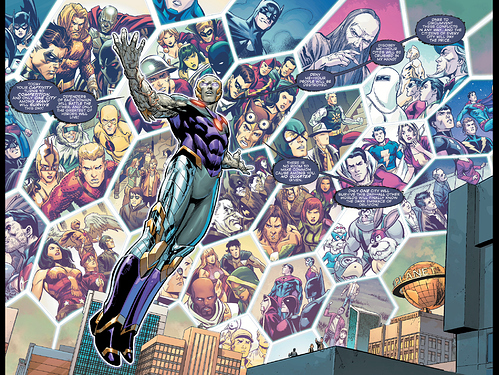