Just finished my digital copy and holy swords and sorceries Batman: THEY MADE BRUCE AND CLARK BIOLOGICAL HALF BROTHERS 0n0 this changes everything!!!…I have a feeling tom Talor does not like Oliver queen.

I wonder if they will have Aquaman as Kull

1 Like
Wonder Woman Finally Has a Girlfriend!
First Look: Taylor and Putri Merge Swords, Sorcery and Superheroes
Nobody.bladesmith December 14, 2021, 12:49am #2

Issue 2: I am kinda surprised Oliver Queen survived given what happened with a fairly similar moment in injustice…then again Oliver may never use his bow again. but really not only is did we learn batman a half Kryptonian and Clarks half brother in the last issue but we learn Clark has a full-blooded sister Zala-El in this universe and she is courting Diana…and Lois Lane is a freaking Amazon. 0_0 what that is a great twist that can be missed thanks to the reveal that SuperWonder of this universe is Zala/Diana. (Hay Superman hooks up with Wonder Woman a lot more than people give the paring credit for, however, it’s generally after Lois’s death.)

I’m enjoying the series so far. It looks gorgeous, and I hope we keep getting peeks at the wider DCU of this setting.

As for Zala… I mentioned this in another thread, but I hope Diana stands against her murder of a child. Like specifically mentioned not having proof that the Kingdom of Storms assassinated Jor-El. For Zala to go straight to killing the prince vice confronting the king does not strike me as grief induced rage - it just strikes me as cruel. I foresee a major confrontation in her future.

As for the Green Man… I saw some interesting guesses on who he could be. My first thought was Hal, based on the powerset, color, and ‘team up’ with Oliver. However, others posited Martian Manhunter, another Lantern, or Lex. Now, Lex is probably the most interesting to me, and could explain why we still haven’t seen the Green Man. In the main DCU, Lex has a green power suit and uses kryptonite against Superman. In this universe, I could see Lex taking (or faking) magic and using kryptonite against the House of El. I could see Lex being anti-alien (obviously), but I could also see him being anti powered people, so starting a war could open the doors to the kingdoms up to normal humans. Thoughts? 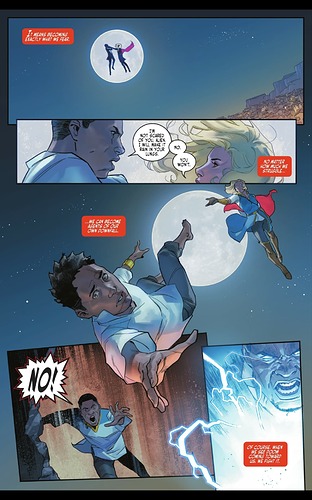 Screenshot_20211213-2249401200×1920 196 KB
I had to post the page because well morally your right legally… actually, it’s not that clean-cut as you can see in the panel Zala did not drop him till after he said he was basically going to kill her. also at this time period, The Law is the word of the king of the land so ya if Jefferson says its murder it’s murder. 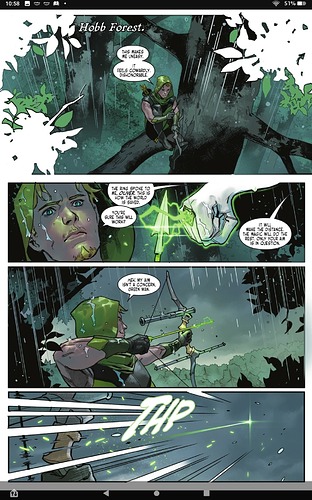 well, they combined joker and Luther and gave him the star heart ring I did not see that coming. I am hoping for a time skip so we can see bruce older. given Tyler’s DCeaced: Hope at the world’s end (Just read it) has Jon as being stronger than his father due to his unique Phisisiolagy this could be interesting with Bruce. given just what he is as a normal human. being able to bentch 1000LBS (500Kg) is the absolute peek of human strength, ya he could be stronger than Clark and Zola.
Can’t help but notice Zola is enforcing a twisted version of Amazonian ideals.

I can’t believe there aren’t more people talking about this. It’s such an excellent elseworlds-y series.

I dropped this after 4 issues. It started out good. Was an interesting swords & sorcerers adaptation of DC as a whole. But I felt the story slowly turning into, yet again, another Bruce vs Clark conflict with Clark being a douchebag. From the spoilers I read about issue 5, looks like I may have been right. I realize we’re not even half way done, but I have little interest in paying to find out if things change. Will catch it when it comes here to DCUI.

Meh. I think you’re jumping the gun a bit, but to each their own.

Perhaps you’re right. I’ll keep an eye out on this thread to see how things develop. If things veer away from Injustice territory, I may jump back in

But I felt the story slowly turning into, yet again, another Bruce vs Clark conflict with Clark being a douchebag.

Between this and Zala denying to Diana that she retaliated against the Kingdom of Storms, I get the feeling there is a shapeshifting villain trying to bring all the kingdoms to war. The most prevalent theory out there is that the Green Man is actually an evil Martian Manhunter, with a dash of Joker and a Green Lantern ring.

actually, The green man was revealed as Lex mixed with joker, however, I missed that when I read it myself. the ring he is using is likely the Starheart (as it’s more fitting for the genera) instead of a Green lantern core ring. However, both allow for some degree of shape-changing.

Farther thinking: I just realized we are likely viewing this version of Kal-El through the lens of Clark Kent…when in fact this is literally Kal-el son of Jor-el and Lara Lor-Van of krypton. beings with the same powers as Kal-el raising him instead of humble farmers would drastically change his morality. also, the two grew up watching how the house of the El elevated the kingdom with their Kryptonian knowledge to raise elevate the kingdom’s Standard of living to a more modern stander. Kal and Zala may want to bring that to the rest of the world. The way to do that in the middle ages was by conquest. so they may be viewing the upcoming war as making the world a better place.

I’m so happy I found this thread.

New issue today! And Tim Drake survives more than two pages in a Tom Taylor Elseworlds story! I’m so proud of him!

I really am loving this series. I agree with everyone saying that there is some shape shifting going on. Martian Manhunter seems obvious, and would work with the prophecy staying that they come from the stars…

Overall, I was sold on this series when I heard Knights and Batman. Then Tom Taylor. And it is living up to my expectations. And as long as Tim Drake makes it out alive I’ll be happy…

I loved that Ra’s twist. however, I personally don’t think it’s MM, it’s ‘Joker’ using the ring to manipulate his appearance something that is in the power of both green lantern rings. the original green lantern ring (Allen Scotts) drew power from the Starheart =) so that works too.