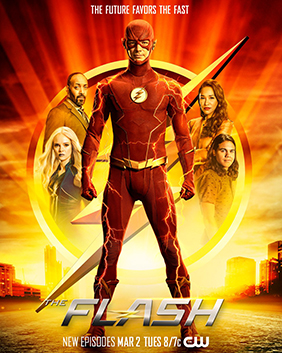 Synopsis: When an experiment to save Barry’s speed backfires, Nash Wells searches for a way to save The Flash and comes up with a dangerous plan; Iris makes a startling realization inside the Mirrorverse.

The first episode of the season will air on Tuesday, March 2, when the show will air at 8 p.m. ET/7 p.m. CT on The CW. The remaining episodes will air weekly on Tuesday night in that same timeslot.
Flash fans will be able to stream episodes online on The CW from shortly after they first air on TV, with the site and app offering them to stream for free with apps. At any one point, The CW will offer the five most recent episodes available to stream for free. Viewers who want to wait to binge all of the series at once, will be able to do that later in the year on Netflix.

I hope that Elongated Man will be recast at some point.

I wonder…I think it was said that the Reverse Flash was supposed to have a role somewhere in this season Or maybe the end of Last season (which is what these first few episodes are)
Will Tom Cavanaugh return as Wells/Thawne or will we see Matt Letcher return to the role?

This kind of feels like what happened with Titans where the previous season’s finale was moved to the next season’s premiere, but here it’s understandable because of the pandemic.

I really hope Chester evolves during the season because this is a character that feels like he’s on a different show. There’s nothing wrong with adding new people and Chunk was a character during Wally’s run in the comics but here, it feels like they just stuck an audience surrogate in to be wide-eyed and throw in random pop culture references. At least with Cisco in the beginning, he had a character to back up the references.

Barry cycling through the Wells’s was hilarious. I missed silly moments.

It would have been nice if Barry had actually thanked HR for saving Iris. (He never really got a chance to say it in person!)

Is Tom Cavanaugh leaving the show? I wasn’t too worried at first but as the scene went on it felt very final. I hope he’ll be back in a main spot as he has been for the last 6 seasons. He’s one of the best parts of this show. Honestly, it really felt like a total goodbye to those characters. Maybe we will get new versions of Wells? But I hope he returns any way possible. He is too big a part of this show to just lose.

I’m curious how this episode differs from what it was supposed to be. Wasn’t this supposed to be the season six finale? It was a great episode. The twist with Mirror Master was great.

Wow what a premiere

First off great action scenes and all. Very awesome™

Barry back with a cool new mask. Him as the other Wells was hilarious.

. And his battle continues with his speed back.

Chester and Alegra filling out the new team. Some nice sort of development from Chester. And Alegra wrapping up with Wells.

Iris trapped and is now finding her way out. Pretty cool horror scenes. But what happened to Cisco’s girlfriend (forgot her name​

The scene. With Top and Cecil were great. And cool connecting the first Mirror Master into it.

Eva is the copy what a twist

. Such a sad seen with all of them giving there goodbyes. And one last “Run Barry Run”

Is this truly the end of Wells? What Mirror Masters plan? Will Iris Iris escape? How will Katlin and Cisco react to Wells sacrifice? All this and more Same Flash Time Same Flash Channel.

Wasn’t this supposed to be the season six finale?

Form what I’ve heard the first three episodes are going to be what they had planned for the final three for last season before the shut down but of course with Ralph and COVID edits.

Ok, thank you. I couldn’t remember how many episodes didn’t get to air/film.

I would hate for Tom to leave for good

I was lost. I should have went back and watched part of S6. When Chester came on, both me and my son didn’t remember him.

Reminds me of this: 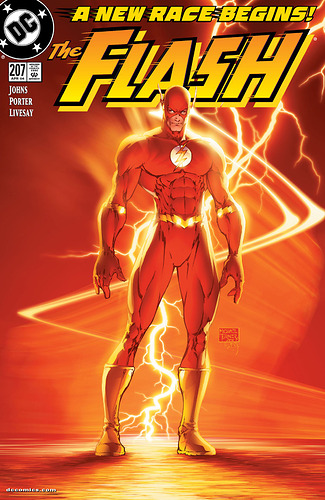 If the Marketing Department at The CW was inspired by one of Michael Turner’s best pieces (DC or otherwise), then I salute them.

Over all I was happy with the season premiere. I think they did well considering it was supposed to be one of the final episodes of last season! I did hate seeing all of the Wellses killed off. I hope doesn’t mean Tom Cavanagh is leaving the show! At any rate, I am eager to see what happens next week.

The killing off every single Wells was the last straw for me, Tom Cavanagh was the only thing keeping me in this show, Danielle Panabaker is barely in the show anymore, even before her pregnancy. I don’t want to stick around and see Barry make out with his sister wife.