[REACTIONS] Superman & Lois S1 Ep 3 - "The Perks of Not Being A Wallflower" - Spoilers!

This was definitely a slower episode than the first two (although the action they had was very well done), but it was also a good one. I got to give credit to the people who designed Smallville, from the school to the town square it really does come off as a small town who’s glory days are long behind them.

Lana was also well done in this episode. Her actress gives a good performance and I really can see her as the teen Lana of the comics just worn down by a hard life. But still has a glimmer of the Lana of old, if that makes sense.

Also interesting to get the first glimpse of Leslie Larr… that is a deep cut, although I find it funny that their first baddy to be taken from the comics is a Supergirl villain… only fair since part of the reason they probably don’t have a Superman villian in that role is because Supergirl has already burned through all of them. lol.

Also while don’t know if anyone but me noticed, or cared, but as a lifelong fan of Degrassi it was cool to see Stacy Farber playing her, that was a surprise.

Still enjoying the show, not as strong as the last two but next week looks great.

I hope they split the powers like Jordan gets invulnerability and Jonathon gets Freeze Breath and amnesia kiss.

I know you were joking about that last one… but I could only imagine the backlash today if he used amnesia kiss on Sarah in an episode.

Edit to also say sorry about not originally blurring the spoilers. I forgot they didn’t say on the show who the girl in the end was.

Yeah I was joking. It would make this infamous for eternity. The only way to make it work would be the weirdest moral dilemma ever. Maybe wall repair vision could work.

Is that Kryptonian heat vision, or…? I also believe that’s Edge’s assistant, can’t be too sure but it kind of looks like her.

Lana is Hispanic here, as a Hispanic I love that representation. Hearing Kyle call Sarah “Mija” was a good little detail they had.

IMO this was a perfect episode. So many great aspects.

Also resolved issues I had with Episode 2 —>

Now I understand Sarah and her family SO much more. Being & Feeling trapped, staying with her BF until her breaking point of leaving both the Cheer Squad and him. On top of getting a resolution between him and Jordan all my issues were dealt with.

The drama in this show is pretty great already and feel it was the strongest in this one: The Cushings, Jordan, Lois’s investigation all had great progression and/or intrigue. I didn’t even realize Captain Luthor wasn’t in this episode til’ the near end since I was so invested with everything else going on in this one lol.

The bond between Jordan and Jonathan is so great. As far as the relationship with Clark I do worry a bit if Jordan will snap at him a lot each episode. I could see that turning off people if it happens so much through the season.

The invasion of privacy thing and relating it to Lois’s and Clark’s past was a great touch. While being on Clark’s side with nervousness about Jordan’s powers and then seeing Jordan more confidant + happy also made me go on his side. Great dilemma, resolution and progression for his character.

In between the drama getting all those cute family moments is the icing on the cake. The action scenes are great as usual. When Lois ‘rang the bell’ for Superman to come I had MoS chills when Superman came in to defend his Mom from Zod. Don’t mess with Supes’ family

The screen shaking + sound like a Jet Engine was near by right before he appeared to defend Lois was such a great touch. ALSO Lois using the pen as a Journalist and a Weapon!!

Love how people love Superman and he gives a smile right back at em’. 5/5 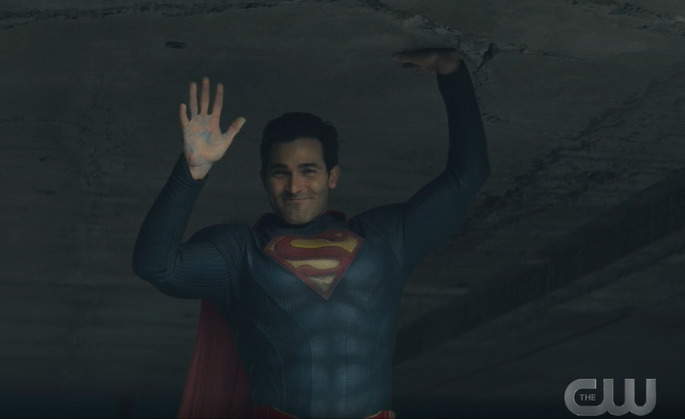 Lesla-Lar in the comics, a very old Supergirl villain who I don’t think has been seen in the modern age. Went off the spelling the show had but didn’t realize the comics spelled it different.

another great ep. I really love the family stuff.
I’m definitely enjoying Lois’ story over Clark’s. Speaking of Clark’s story, I wonder if captain Luthor will be involved with Morgan edge somehow. I think there are 15-16 eps this season? So, assuming the Luthor mystery reaches some kind of conclusion this season, Clark’s and Lois’ storylines will have to meet at some point.

Jonathan is such a great brother but I feel like he will reach breaking point soon. I still think Jon will be like earth 2 superman where it takes him longer to develop powers. I also still think Jordan will develop TK.

I am enjoying Clark’s story way more than Lois’s story. The show seems to be balancing its 4 leads well.

fight with the invader guy (credits say subject 11). Great moments with the listening talk. And him Clarking if this episode was hilarious.

Lois investigating and doing what she does. The piece just started to show

The Kent boys footballing. Enjoyed how they bicker but still don’t despise each other. They got each others back.

The Lang’s dealing with there stuf and learning more of them.

And the mystery woman at the. Credits say Larr so from what I read hear and googled it’s getting interesting.

Who’s the mystery woman? Who’s the invader? What next for the Kent boys? What Edge up to? Does this have anything to do with Luthor? All this and more same

I’ve decided to give this show a shot, and while my initial reservation was that they revealed Superman to his sons too soon, I think it’s working out well so far. My only concern right now is that for all there’s been talk about the Kent family being closer and spending more time together, they don’t actually seem to spend the sort of time together that they need to? I thought the paint scene was cute, but instead of always cutting to Lois and Clark with wine on the porch, I’d like to see some scenes between Clark especially, and his sons more in the vein of the bedroom talk scene that we got with Lana and Sarah.

Maybe it’s just me? I don’t know. They still seem very split. Maybe that’s the point? That they say they’re closer, but just moving to Smallville isn’t actually enough to fix the problems they have?

It’s still early, and I’m still hopeful that this sort of thing will develop.

I have completely missed these, but this version of Superman definitely flies high. Unfortunately, like Icarus, he ends up falling. Also, what an original episode title, not. 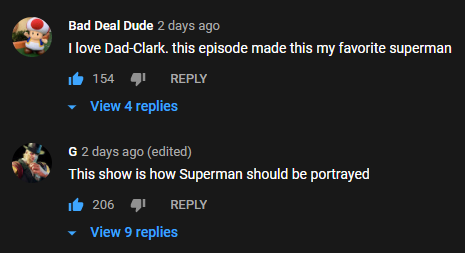 Same. I thought he did great in Supergirl and the crossovers. People complained he was outshined by Supergirl, but well… it was her show. I knew with the spotlight on him he had the potential to show what a good Superman he could be.

Dorky Clark really is who he is, isn’t it? It’s not a cover? This episode it really showed it, like his moment with Jordan about Sarah.

I always thought his acting was fine, but standing next to Brandon Routh and Tom Welling he just…looks too small. It’s almost laughable. Clearly he’s not really a small person, but without either of them around, he’s fine and it’s not as obvious.