1_tS6OOXBXzZrr_VBRh3pA2w667×1000 148 KB
Synopsis: Lois, Chrissy and Clark team up to piece together the significance of Smallville to Morgan Edge.

All I gotta say is…what an ending! And I thought the reveal from a couple of weeks ago made my jaw drop.

Also, it’s nice to see Sam and Lois talk. Much like with Lana’s husband or Edge’s assistant, they’re not so cut and dry when it comes to their characters. On any other show, it would be easy to portray them as just stubborn, selfish, a jerk or evil. With this show, you get layers.

My brain is melting

Is there any way to save Kyle and the others

Poor Clark breaking down for what Jordan’s had to go through. Their hug scene and Jonathan + Lois’s hug scene… soooo wholesome.

Cool to see Chrissy Beppo again. The show continuously works so well at balancing all these characters and storylines. Everything just came together in this one very very well. Writers =

Great action sequences. The Superman rises music that played during the scene in Mexico was SO GOOD. It was also cool for me hearing Superman speak Spanish.

Very cool at how important they’ve made Smallville and it’s people for the story. Again putting respect on Martha’s name with how treasured she was by the town.

Edit: I blinked and missed this amazing shot.

Anyone else get DBZ vibes from Superman and “Morgan Edge’s” meeting in the rocky area?

In fact before their fight starts Vegeta offers Goku an opportunity to join his side.
If this suddenly becomes DBZ next week my brain would literally explode.

Another great episode in a great show.

Great action sequences. The Superman rises music that played during the scene in Mexico was SO GOOD.

Glad someone mentioned this. They’ve been delivering some of the best action scenes I’ve seen on TV. Seeing Superman on TV in his suit, doing Superman things… and seeing it done well… it just makes me happy. Love how his “fight”, while sick, against those bank robbers consisted of him just casually brushing them aside… classic

. You’re right about the music too. I hope they release a soundtrack, like they have for other CW shows.

Needless to say, the family drama at the core of the show is fine & well. We saw more of Sam Lane this week and his interactions with the rest of the Kent family. I thought I had him figured out, but I don’t

. Jonathan letting him have it, standing up for his dad & brother, was cool.

The reveal at the end. So is Morgan Edge Kryptonian? Brother? What does all that mean? They just keep it coming every week. Can’t wait for next episode.

New article praising ‘Superman and Lois’ from Forbes. Hope the show gets more and more attention like this. 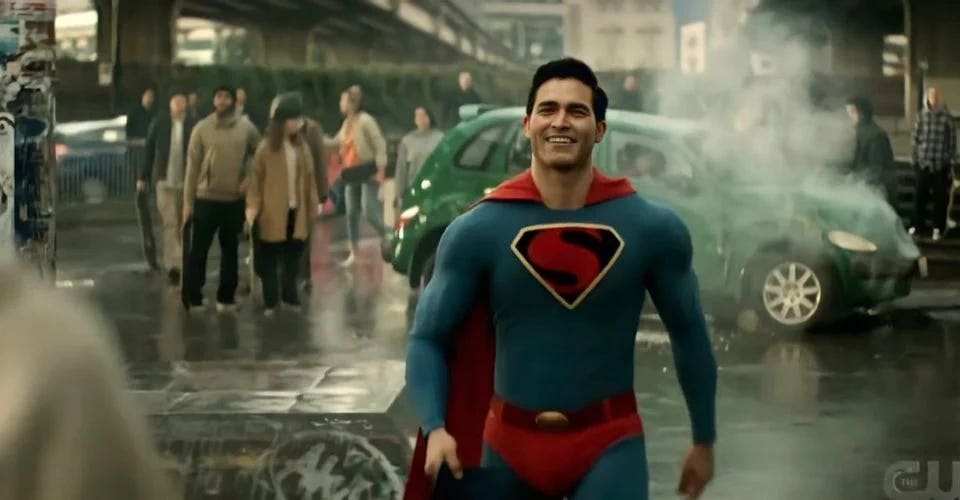 Any DC Fan Should Be Watching 'Superman And Lois,' CW Or Not

Superman and Lois represents a new era of DC TV, a bridge between the Arrowverse and something...much better.

Another fine episode to what to is fast becoming a terrific TV show. It’s leaving the rest of the CW–whatever-the hell-verse it is in the dust. Best scene in the episode–Jonathan uncovering his stash of weapons to fight for his mom! He is quickly becoming the most interesting character on the show.

You know what I appreciate the most about this show? It can take it’s time with characters so when something big happens, we understand the stakes. Especially with the last scene, you can tell where the money is in terms of production values. That shot of Superman and Edge at the end was breathtaking!

Kick off with reporter work form Lois and the gang. Nice for Clark to help and see him do some investigating too. The plot is revealed with what Edge is doing with his people. Kryptonian souls taking over. Interesting.

The bank fight was awesome™

. Really cool to see him still helping around the world from time to time.

John try’s ask Teegan out and it doesn’t work well. The Coach with a fun line

. Jordan and Sara having some fun practicing and super sneezes stop that.

Jordan and Clark have a nice moment in the fortress and getting a nice father son moment. John and Lois the same and cool to see him stand up to Sam.

Sam is just trying to do what he knows best and it wrong and there’s a part that knows and a part that ignores it. Hopefully the relationship can start to improve.

The talent show and a nice Kushing-Lang family moment. And a nice song. That lead to chaos.

The battle at the barn was great. Sam stepping (which now gives proof to why the weapons may have been good). And the Mr.Kushing’s reveal I knew it. Now how will that effect the family.

And the big end twist. Wow and great scenery. I’ve heard theories of it being H’el, Zod or Jax-Ur, another Clark form a multiverse, a clone of sorts, his metaphorical belief they are brothers or something entirely different. So pretty much anything

What will happen with the Kushing’s? How will it be with Sam’s team in Smallville? How it Edge Clark’s Brother? All this and more Same

I must say… I’m kind of hoping for a Clark/Jonathan moment now. So much of Clark’s paternal energy has been directed at Jordan, for obvious reasons. Lois is covering for him in that department, but I can’t help but feel like Jon will eventually need some quality father son time as well.