What an amazing episode! The first half was flashbacks, using some footage from the pilot but also filling in the gaps between said moments. Seeing Clark’s early days as Superman and with the Daily Planet were what I thought this show was gonna be when it was first announced. Getting a small taste of it here was amazing. Then the middle of the episode happened and the stakes were raised. When the ending hit and I saw I had to wait three weeks for the next episode, I was pissed I had to wait but excited for the anticipation.

What an amazing episode!

Wholesome to see more of Clark & Lois’s early life together. Really love those two actors and their chemistry. The Classic Superman stuff

Thought it was going to be a regular origin episode and pleasantly surprised how they tied it into the present day stuff. And what an ending!!

Some really cool visual effects we haven’t seen before in the series as well. Especially that running sequence of him transitioning from a kid to adult

Seems like the mind submission process at the end is exactly what happened to Steel’s Superman. It makes even more sense that he’d start to kill innocence aside from the idea alone of seeing his Mother and people. Damn the writing’s good!

I got chills when Jordan stepped up and heat vision Tal-Ro. Hope we see a proper beam struggle scene later on, don’t remember if we got one of those yet.

Glad we got more warmer and protective sides to Jor-El’s hologram prior to his destruction. Made it all the more sadder and for Clark too.

Also helped add to the contrast between Jor-El and Tal-Roh’s Father. No wonder Lara left Zeta-Roh…

Another awesome episode, looking forward to the rest!

Slam dunk the best show on the CW, and also one of the best on network, cable, or streaming TV. Devoid of unnecessary angst, agendas, and soap opera campiness, Superman and Lois is telling a compelling narrative that continues to entertain on a weekly basis.

The big question is, who is Lois talking to on the phone, John Henry Irons or John Diggle?

Love the warmth they have towards Superman’s character throughout the series.
Didn’t know the show would do it literally

Also as a side note Tyler’s doing the voice of Sephiroth in Final Fantasy 7 Remake who happens to have an iconic shot as well surrounded by fire. 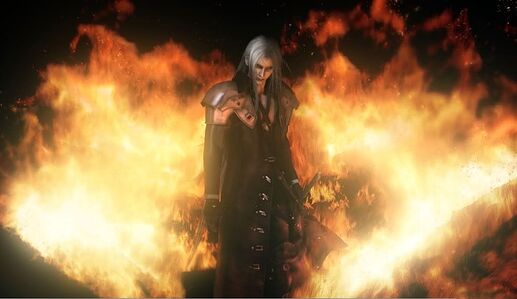 i assumed it was Irons

OH Wow ! Didn’t know about this. Designs on point. 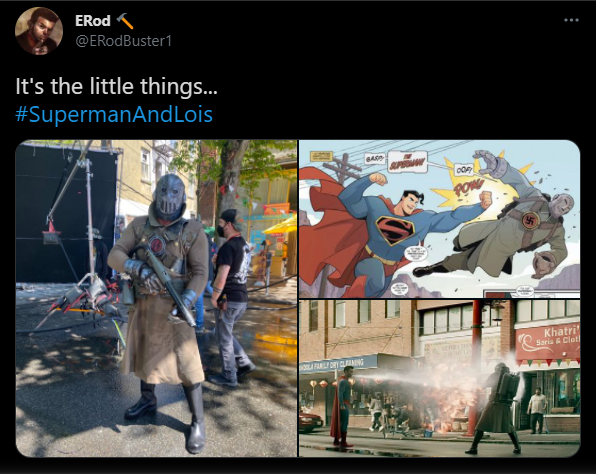 It was definitely JHI considering she said “just like you said it would.” Though after the teaser for the next episode, we can also see that she’ll probably be talking to Dig in a few weeks as well

I can’t wait to see Diggle interact with this show. The Batwoman appearance was underwhelming and I know David Ramsey’s got an appearance on Legends coming up as a different character, but hey I’m always happy to see him in any capacity.

The Batwoman appearance was underwhelming

To be fair, I don’t think it was supposed to be anything major. Based on his interviews, it seems like his cameos on S&L and Supergirl will be in about the same capacity, w/ his Flash appearance being the biggest one

The more you know! 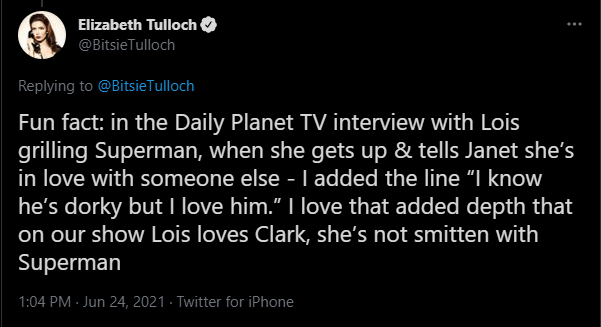 Nice origins. Some similar scenes from ep one but nice and makes sense as they had to add a few episodes so that probably saved them time and worked out well filling in some nice origin gaps of this supes. And a Jimmy mention at the planet. Nice.

Overall very s week origins then things pick up. Jor-El AI is dead and Supes and edge sucked it out. Then the family talks things out with the Kushing’s and now Jordan and Sarah finally getting together. All nice to interrupted by good ol Uncle Morgan. Supes submits and we learn more of his past and dad. Now Supes is in trouble and the family has to save him with Steels help.

Will Superman turn? Was John right? Will Edge win? All this and more Same

I loved this episode! So sweet to see their relationship form. Especially loved the scene where Lois told her friend was she in love with Clark Kent, and Superman was listening from afar.

Both actors are just perfect for their roles. I think Tyler Hoechlin is now the quintessential Superman for me.

Awww! Every time I think I’ve reached my love for her, she does this! Bitsie plain rocks! I love the fact that yeah, Lois fell in love with Clark, not Superman, at all.

Seeing him on this show specifically is what I’m most intrigued by, this show is not even close to what the other shows are.

This episode was exceptional, as all episodes have been. I loved seeing the love between Clark and Lois develop and the fact that Lois fell in love with Clark, not Superman. I’m also happy about Jordan and Sarah!

Could this have happened on John Henry Irons’ Earth with that Clark? But except of Lois obviously, his family was with Lana? We know in different Earths different choices are made, so that Clark could’ve most definitely have been forced by that Earth’s Tal-Rho to save is family.

Possibly. My theory is that John’s Superman didn’t have anyone else left after his Martha died. Maybe the black suit was a memorial type of thing in remembrance of her. And Tal-Roh then offered him to see his Kryptonian Mom + people like he did with Prime Earth Superman (what Jonathan theorized). Then having him submit but without the knowledge that Tal-Roh would turn him truly evil to kill innocent lives on Earth. So Earth Prime Superman submitted for his family and Steel’s Superman did because of his lack of family.