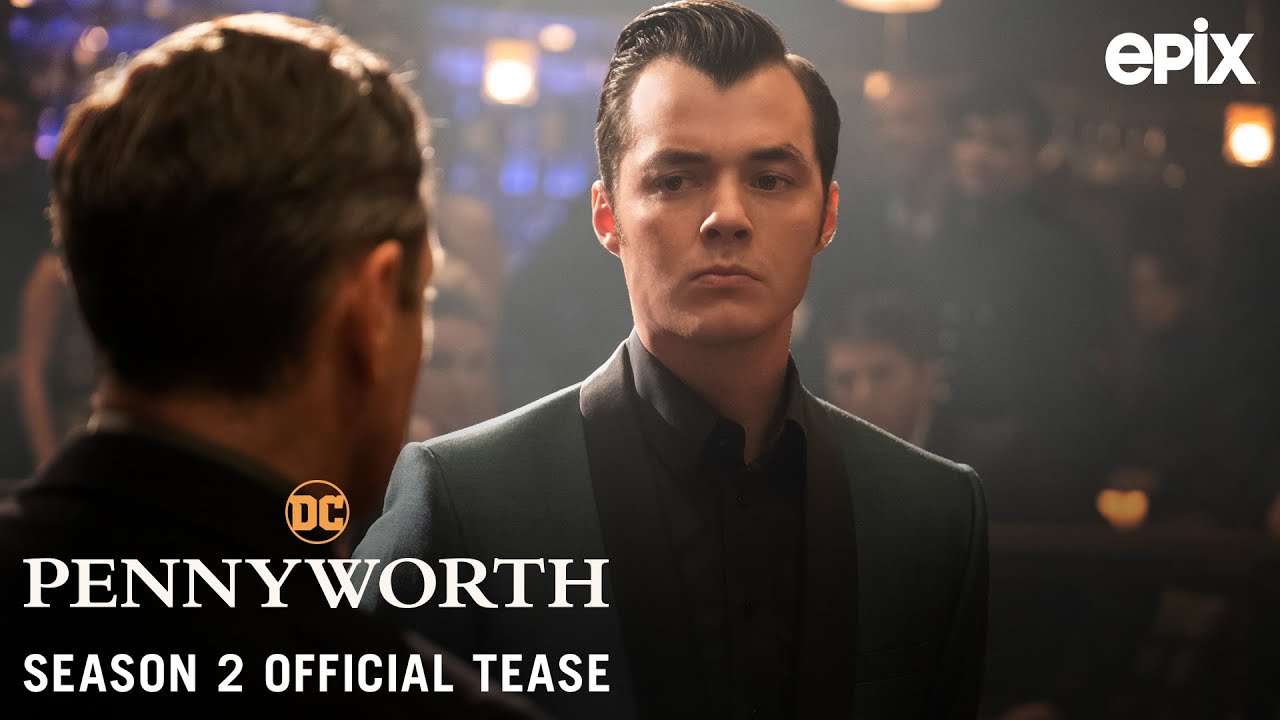 1_abX_dxa2_h7GWJ-Z5corWA600×900 58.8 KB
Synopsis: While Alfred and Daveboy run one last job for Gully in order to buy tickets to America, tensions ratchet up at Raven Union HQ between Harwood and his lieutenants.

Are you watching Pennyworth? Let us know your thoughts in the comments below!

HOW TO WATCH:
Pennyworth airs on Epix on Sundays. Season two is currently four episodes in and is set to return for the final six episodes beginning March 7, 2021. You can also watch Pennyworth season two with Epix on Amazon for $5.99 a month as part of their Prime Video Channels.

I figured Katie’s stockholm syndrome toward Bet would eventually set in fully, but not quite this soon. I can’t see things ending good for her at all

Man I’ve missed this show. Nice to see it back.

Alfred going through a tough time here. The hiest, the stuff with his girlfriend (forgot the name also nice song) and Mrs. Troy (think that’s it​

), and his Mum kicking him out.

Bet getting some origin and Katie getting closer. Don’t see this going well but who knows what’s twists will come.

The Lordship getting unhinged. The secret meeting making him loose it. The dance scene did give me a laugh​

The Waynes fight and make up and repeat. No wonder Bruce it so emotionally challenged it’s not the trauma it’s genetic

What Alfred’s girlfriend find out? What about the lieutenant? Can Thomas save Lucious? Will London surrender? Will Alfred get to America? All this and more Same Proper Time Same Proper Channel.

Poor Alfred thing just seems to be going wrong but hey he’s doing it. The scene with his mum was sweet though.

And Lucious save in an awesome™

Will Alfred get to America? What will happen Lord H? What’s Lucious’s plan? All this and more same Proper time same Proper channel.

Wow this episode was awesome™

The singing seen was very sweet well done. Just what Alfred needed to her.

Alfred struggle with the decision talking to his pops and went to leave only to say no. His mom was hilarious she never wanted to leave​

Melanie got in some hot water. Troy found out but she fought in a terrifying and great fight scene. Her and Alfred talking about going to America was very sweet.

The Syke sisters try to help the Lord. Then he sacrifices himself for them. What a twist.

Luscious was great. His literally mind was very fun. And Thomas doing the right thing man the US Gov in the wrong here. And Martha didn’t tell yet.

The whole gang together and ready to finally stop the war. Looking like to be a great finale three episodes.

Can they stop storm cloud? What will happen now that Harwood is dead? Will Melanie and Alfred meet in the US? Will Troy get Alfred? All this and more same proper time same proper channel.

Alfred battle Troy. Great way to fight. And in they he still didn’t want him to die. Alfred heart good and all. And his scenes with Baz were great. Enjoy talking to dead scenes.

Syke sister going off the rails and now they get another display.

The Wayne together. Always enjoy seeing them since it gives more for them than just dying.

And Salt is getting power and wants it.
And Alfred’s dad it back. Wow a surprise.

Will storm cloud be released? How is Alfred’s dad back? Will Troy recover and act? Will London surrender? All this and more Same Proper Time Same Proper channel.

Not sure how many people are watching this, but I gotta say I’m very intrigued by that big reveal in the season finale. Once I realized that we never actually found out the assigned gender of Thomas and Martha’s baby beforehand, I thought there was a real chance they’d throw us a curveball and have it be a girl, and lo and behold…

I could see this playing out in a number of ways. Maybe in this universe, Bruce will be born later and just has an older sister this time around? I know there have been a couple stories where he’s had a brother in Thomas Wayne Jr., but I can’t ever recall him having a sister. If that ends up being the case, will this be a completely new character or a reworked one? Perhaps it’s Helena Wayne, or maybe in this universe, Bruce and Kate Kane (Wayne) are siblings instead of cousins

And then there’s the possibility that this isn’t Batman’s sister, but rather the future Batwoman (just not Kate). Perhaps she’ll still be an only child, have a name like Bryce and go on to experience a similar life that Bruce has had in countless universes. Or maybe the writers have something else entirely planned

Whatever ends up happening, this is gonna end up being a pretty huge shift to the typical Batman mythos. While I’m sure some people are already derailing against it, considering Pennyworth had already established itself as pretty different from what we’re used to seeing from DC, I remain very much open to big changes like this. I’m really hoping we get an announcement of a 3rd season soon, because I really wanna see what they have in store not only for Thomas and Martha’s daughter, but also for the battle for London. Overall, this was a great way to cap off a strong season!

Yeah, that threw me for a huge loop. When the baby was born I told my son, look, the 1st appearance of Batman. Then they said it’s a girl ???
When this show was announced, I was not all that excited about it, but this has been an excellent show, looking forward to season 3 !

9
This was a nice calm before the storm. Sweet make ups and wrap ups building up to the end. The guest of the century and a plot twist. I said the the dad was the bomb and it was trick at first. Only half right​

.
Fun casual conversations with the Sykes and the Penny crew. Very nice to see how far they’ve both come.

10
Wow what a finale. The moment with Mrs. and Mr P were great. Even his death at the end. Sad but sweet in a way.

The Sykes beat the crap out of Salt. And justice was served there (so we thought).

And Wayne’s get married in a happy end of the world moment. Still enjoy seeing more of there character shown. Since in the comics and others it’s normally dead memories, and alternate realities.

And Alfred and crew save the day. Luscious almost had it. The eating it works I guess

. Thought it was going to end on that truck seem then BOOM.

The Wayne’s looking happy. Martha ready to fight even when pregnant. Just as Persistent as Bats. Speaking of Bats the twist when we thought the Dark Knight would Rise but it’s a… girl? Wonder what it could be. Does Bruce have a sister. Is it Julia and was the baby’s from a point of Martha and Alfred hooked up (seems unlikely but who knows). Is Bats a girl. So many possibilities.

The war continues the way the Ravens wanted it too. Alfred and Bet on the same team was fun. Wonder if we’ll see what happened in those six months next season or just continuing straight into the action. And Troy is a meta in a way. The first one spawns. Interesting. His code name definitely has to Storm Could.

Overall the show just keeps getting better. Really hoping for a Season 3.

Helena Wayne, or maybe in this universe, Bruce and Kate Kane (Wayne) are siblings instead of cousins

That is an interesting theory too.

Also did the car they were driving look kind of like 66 Batmobile.