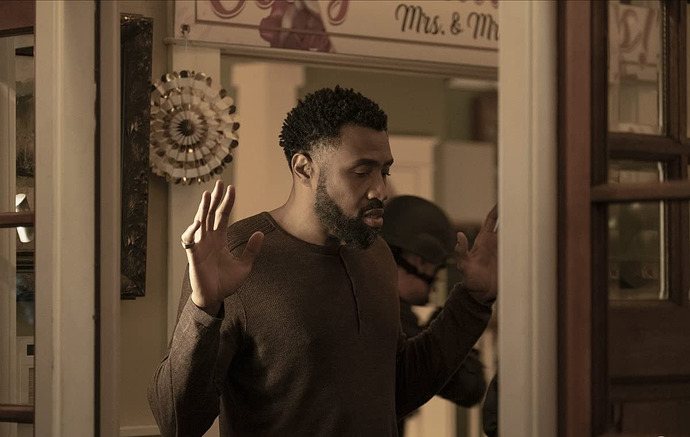 Season 4 episodes of Black Lightning will air on the CW on Mondays at 9 pm. and will be available to stream for free on The CW App and CW.com the morning after they air on television.

Not only are we still not getting upcoming episode promos, but that had to have been the most abrupt ending to an episode I’ve seen. The lack of care just continues to astound in the worst way

I enjoyed this episode. It’s interesting seeing Jen adjusting to her new body. And I figured Tobias would try something like framing Jefferson for some crime. I do have to agree that the ending to this episode was rather abrupt. And I wish they would show promos for the upcoming episodes. I have no idea why they aren’t.

Whale always planning something. The nullifier and red everything going smoothly for him.

Jeff upset but not much for in this episode. Nice apology to Lynn though.

Lynn testing the serum and keeping secrets again. I can see were she’s coming from with this one but how has it worked out last time.

Gambi always so helpful and sneaky. Got the promethium and ready to go.

Jen adjusting. But the test was uncertain. Weird. TC and her were fun together.

fight. But definitely a strange ending.

Will Ishmael complete his mission? What with Jens results? Can the Pericles defeat Whale? All this and more. Same

Lightning got her suit. Love controls her actions and she got tick into an ambush. Why is it so hard for kid heroes to listen to rational ideas. Now she’s falling again.

Thunder got a new suit. And her friend died. Did she even find the hard drive? And a car is coming for her.

Lynn got fired and blames Jeff as always when this one is clearly not his fault. Then is arrested and a highly detailed drug search scene.

Jeff studying Ishmael. Getting help form the cop friend. Cool fight and now he about to get stabbed.

Painkiller nice interrogation scene. Fun to see him arguing wi the himself.

Gambi being the cool uncle. TC being the nice friend. And Whale plotting it all as his plan is coming together. No more Metas.

This episode ended dark. Just man it was crazy.

Will the Pierce family survive? Is this Whale’s ultimate plan? How close are we to the end? All this and more Same

Episode 9 was crazy. And that end was very dark. I really can’t wait until tomorrow night’s episode.

It’s going to be good.