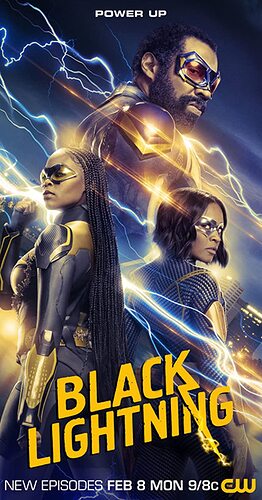 Synopsis: After four seasons, the game-changing, relevant and electrifying series comes to an end.

Are you ready for the grand finale of Black Lightning? Let us know your thoughts in the comments below!

HOW TO WATCH:
Season 4 episodes of Black Lightning will air on the CW on Mondays at 9 pm. and will be available to stream for free on The CW App and CW.com the morning after they air on television.

That sure felt more like a season finale than a series finale. I guess it’s good they gave themselves room to return if they ever get the chance, but surprised the last shot wasn’t the one with the family.

I have to say I like the way they tied everything up, but still left things where Black Lightning could come back if they are ever given the opportunity. I am really sad to see the show end, as it is one of my favourite DC shows. And I am disappointed that Painkiller wasn’t picked up. Anyway, I loved seeing Jen take on J.J. I honestly didn’t expect that. And I loved Jefferson’s final battle with Tobias, even though it didn’t seem quite long enough! At any rate, it was a satisfactory finale.

Yeah Painkiller being passed hit pretty hard. BUT, they set him up so that he can be completely separate from the Arrowverse now that he has no memory of the Pierces. So that makes it VERY EASY to adapt on another platform without the baggage of Black Lightning.

Fingers Crossed that HboMax picks this up. Jordan has worked so hard!

BTW Black Lightning trended no.5 in the US on twitter.

So… after 4 years of watching this show, the solution all along was to beat up Tobias? I expected his downfall to be way bigger. They could have at least made a public spectacle out of it and exposed his evil ulterior motives to the people of Freeland that voted him into the mayor’s office.

The JJ/Jen thing came out of left field. Maybe would have been better to just make the switcheroo permanent, instead of the weak sauce explanation we got. I mean if there’s beings up there, ones that long to take our place, that’s worth more than a few minutes of material in the last episode.

I liked the happy ending. I like the wholesome family atmosphere, especially after a stretch where things seemed very dysfunctional for the Pierces. They tried to button things up nicely to end the show on a positive note. I appreciate that it doesn’t end on abrupt cliffhanger. To quote Young Justice, I am “whelmed”, but I do appreciate the entertainment the show gave us for 4 seasons.

First enjoyed a lot of the music in this. Opened out of the get ready to go.

Jen’s story was a surprise. Didn’t see the alien coming but interesting way for her to come back for the end. The fight was cool so I’m not complaining. The Chief battle was definitely rushed but at least they wrapped it up.

Gambi, Wylde, and Thunder team up for a break in. Nice fights. They just burned that guy alive

Painkiller gets his closure at a cost. Most likely to give the show a fresh start if it was still happening but nice closure in a way.

Jeff nice flashbacks with Gambi and the scene with his dad. The burst from the grave epic. Then came the fight with Tobias. The fight for it all a little short but great none the less. And a pretty cool death scene.

Ends with a wrap up with the Family and torches are past. Like how it left it open for maybe The Outsiders or something like that.

And the LaLa scene felt like a fun post credits scene especially with him Han Soloed most of the season.

Overall a pretty nice season to end it a little rushed but at least there is closure for the most part. The show had highs and lows but was such an awesome™

show. From start to finish with some new villains introduced but Tobias still staying in top. A great family bond in the end for a great hero. Definitely in my top 3 Arrowverse shows.

It was an electrifying ride of 4 seasons. Hopefully we can see them again.

This sums it up perfectly for me. I like your write up!

First enjoyed a lot of the music in this.

. I feel like the soundtrack to this show would make for a very nice soul/R&B listen. Gotta look it up some time.

So Jordan Calloway posted on Instagram to put the character to rest and that he is moving on.