Starfire deserves more. She doesn’t just see humans as smells, that sounds sexist. Like someone so “easy” for sex they don’t even see you as human? Thats the excuse? NO! STARFIRE DESERVES MORE! Starfire deserves the love of her life, she deserves not believing Nightwing is the love of her eternity and not even be in the Nightwing rebirth with him. NO! She IS the romance, he was the romancee. I miss Star’s thought boxes being in cursive, to show how dramatic she is, her dramatic flying off to space, her heart was probably so broken when Nightwing just moved on, cuz I know I was broken.
I grew up watching Teen Titans and I only caught up to comics a few months ago and I just feel completely betrayed and if I could fly off to space so the vacuum can collapse my lungs, so I wouldn’t have to gasp anymore over this I would totally do it.

Agreed. Starfire deserves better as a character. Starfire is one of my favorite characters in fiction and she deserves more than being a glorified sex doll.

Shameless plug I’m writing Teen Titans Season Six and trying to bring it back. If you want to discuss Starfire as a character and how you would like her handled as a twenty something year old I would love it.

I love it! You’re right, but I still like the outfits she has, I have faith that her outfits are not just to objectify her, I’m Brazilian so I understand a bit better that clothing just has different meaning in other cultures and even if the initial intent was to objectify, many women take that as meaning of strength and freedom. And if I had Stars powers I’d be fully in a bikini all day to get as much sun as I can

I definitely see your point. I wanted to give Star a modern 80’s outfit.

I love 80’s Star is definitely an 80’s gal, I think she’d listen to ABBA, and the original Daft Punk stuff hahaha. I cried when I saw the trailer for Wonder Woman 84!

I know that movie looks amazing

First and foremost, this is a rant and you can ignore it if you so choose. Just know that I value modesty and feel very strongly about it. I’m old fashioned that way. If y’all are offended by it, I’m sorry.

Star doesn’t really seem that broken up about Nightwing. She seems to have fully moved on in Rebirth. She is so much more than Nightwing’s girlfriend! She doesn’t need romantic fulfillment to be a great character. Nor is it entirely Nightwing’s fault. Nightwing has always had romantic problems; because writers are usually pretty terrible at trying to figure out who he likes. I actually thought he had a really awesome relationship with Shawn Tsang.

Also, Star should be far more than a sex symbol. It ridiculous how she has been treated over the years. They’ve always treated her like she’s just eye candy with a tremendous amount of power. That’s just some new philosophy that a woman has to show off her body to be beautiful. I have always thought that was dumb. It devalues women and makes their bodies more valuable to people than their personalities.

But this is all just my opinion. Y’all can take it as you will. I have never liked the skin tight clothing on heroines. It serves no purpose. The same goes for male superheroes. Maybe there is some science behind it. I don’t know. But I feel like Rebirth has done the character the most justice. It’s the first time she hasn’t been treated so badly.

I agree, you’re right.
I just relate to Starfire too much and see my own relationships in her and just feel really hurt I guess and I believe being romantic is part of who I am and I just think it would also be one of her traits, not necessarily to be someone’s something but just because she is so intense. Even my horoscope feels like it would be the same as hers and I just know Im really sensitive

Oh, don’t get me wrong. I love romance stories. 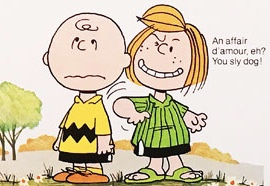 Haven’t I ever told you, I’ve never been on a date in my 21 years of life. I enjoy reading about them. Not so much the experiencing them part. I am pretty sure HCQ and I have that in common.

I really like Starfire, and I agree that she deserves better. I’m a big fan of the Dick x Kory pairing, and I’ve posted at length on other threads about how much I dislike the terrible way that their relationship was de-railed and pushed aside.
The thing about Starfire in the animated series that I really liked was that they de-emphasized the fanservice aspect of her character. That allowed other aspects of her character, sometimes overshadowed by the fanservice (or pushed as a way to tear her down as the alien skank who stands in the way of Dick x Babs) to take center stage.
Plus, she’s just really, really powerful. I get that comics have a sort of “floating timeline,” so characters don’t age in a logical or consistent manner, but she’s one of the heavy hitters. She should be used more as such.

I’ve loved Starfire since the original Teen Titans animated show. She was a powerful bada** and also sweet and kind. I identified with her and wanted to be her so I watched the show. I didn’t read comics as a kid so I didn’t see her outfits until later and some are obviously for the male gaze but, at least in my head canon, she wears that because

a) she’s from an alien culture which has different ideas about clothing
b) gets her power from the sun so skin showing is a benefit
c) she’s a strong, confident women who can wear whatever the h*** she wants

I may be making some excuses for it but at the end of the day we shouldn’t sl** shame the character and diminish her character to that of a “love interest and sex symbol.” I think everyone on this thread agrees she’s amazing, she’s more than Nightwing and we want the best for her.

I actually prefer Starfire hanging out in space with some gal pals and having the black background behind her solar powers. I’m fine with her having romance, and exploring romance from a different culture’s POV. I see the character in more of a space opera/galactic setting than being Earth-bound, so I’d prefer a partner less tied to Earth (and, yes, I’m slightly biased here). The DCU has some cosmic/sci-fi human heroes who could span culture clashes and space odysseys.

She doesn’t just see humans as smells, that sounds sexist.

I get what they were trying to do with that, highlight more of her alien nature, but it didn’t go over very well, and she got a LOT better as the Outlaws series progressed. It’s funny, a lot of the complaints you had, about her being able to move on and have her own life, that’s actually all done within that same series.

I want that rn hahaha! Im obsessed with space and Star could definitely have a star crossed romance. I sure would like one

She is one of the main leads in Justice League Odyssey, the space-exploring JL title along with Cyborg, Azrael, and Jessica Cruz, the latter of whom people are getting some subtext off of, so who knows…? 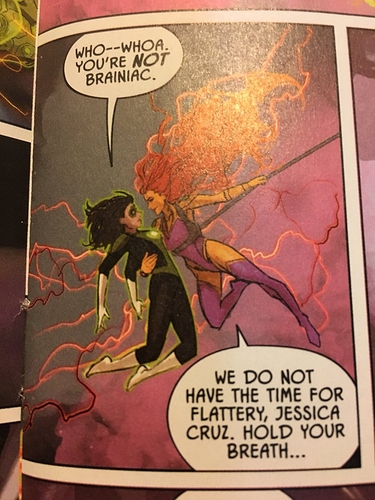 On the Subject of DC Women’s outfits… anyone play Injustice 2 Mobile? I MEAN COME ON.

Imagine this is in all caps: Id be so f*cken exited If Starfire had something with Jessica!! They are incredible! Jessicas personality would be so carried away with Star’s intensity and even if she’d be a bit scared at first I think she could fall in love with her.