Random Series You Gave A Try And Loved

Recently, I’ve been going through the Superman: Man of Tomorrow digital comic and loved it! It’s just what I’ve been looking for in terms of done in one stories. What makes it even better is it was a random find here on DCUI. Sure, I’ve heard of the digital series before, but it wasn’t something I was actively searching for. I found it randomly and gave it a try.

This got me thinking: are there any series you’ve randomly come across, given a try and ended up loving? If so, what were they and what did you like about them?

My pick would be…
Stars and S.T.R.I.P.E, I like how Stargirl got started as a hero, and has a bit of comedy.
Teen Titans: Year One, Love the art style and storyline.
JSA, Stargirl Adventures continues with other heroes.

Back when I was a hardcore JLI reader, reading nothing but JLI, JLE, JLIQ and Mister Miracle…
Suddenly that all came to a stop in 1992 when, following Breakdowns, the familiar JLI was replaced by something different.

I didn’t take too well to it.
I dropped JLE (now called JLI) and stuck with JLA (the previous JLI) for a few more issues…
But it just never clicked with me.

In 1994, we had a baseball card shop decide to get into comics (as almost all card shops were doing in the ‘90s due to the speculation boom and the cross-marketing of the collector cards).
I still was kinda flopping around in comic land.
I had gotten into Vertigo when it launched but I still missed the JLI…

The comic shop decided they were going to rent the conference room at a local motel and do a comic convention, and I got a booth to sell some of my older comics.

While I was there, I thought I’d buy some new stuff from the other vendors to put on my table so it wouldn’t look so dated.
One of the books was Madman Comics #1.

I went back to my table and because it wasn’t very busy, I cracked open Madman and started reading.
And loved it.
I took it off my table and ended up buying every issue of it until it hit delays with the ‘G-Men from Hell’ story.
By that time, Madman had helped me get over the loss of the JLI.

A little while ago I gave “Gotham City Sirens” a try and just loved it. I honestly didn’t think I would have enjoyed it as much as I did, but the writing was very fun and the art style wasn’t bad either. 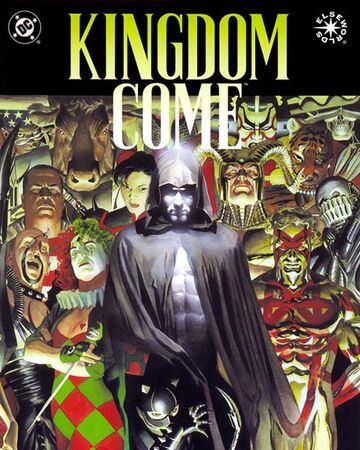 Definitely not considered random now, but it was for me at the time. Looking at the cover, I kind of knew who the Spectre was, that looked like it might be Catwoman, and that Harley Quinn looking woman had a Joker on her cane​

. But I had also never seen Alex Ross’s art until this point, and I had to know what this book was about. And it blew me away.

And
Planetary
Which I knew about

That is an excellent substitution for the JLI! Also, what a cool story! I’m a JLI fan, myself, so I know the feeling when you’re looking for something the fill the void.

You’re not the first one to recommend Flintstones. I’ve heard a lot of good things!

I’ve been meaning to give that one a shot!

Hell yes! Kingdom Come is truly special. You want to have your mind blown? There’s an audio drama from the late nineties to the early two-thousands of Kingdom Come with a full cast, music, sound effects…everything. You know what’s even better? While it really an adaptation of the novelization, you can listen to it and read along with the comic with little to no problems. Look up Kingdom Come Audibook Movie on Youtube. Someone’s uploaded it in parts. They’ve even added the panels so you can read along.

I love that this was your first Alex Ross. It’s an amazing way to start.

You’re totally speaking my language with Planetary. I sort of knew about it when I picked up the first trade, but I was not prepared for how much I would enjoy it as I went on!

What was it that pulled you in, if I may ask?

I heard the basic concept (government controlled Superhero team to oppose Justice League) and thought that was interesting. In addition I am a big fan of Stargirl and Hawkman, so I knew I would like at least two characters.