Question about order of comics

How to put it?

When I go to “Comic Books” and go to the Storylines or something (for example), say “Get to know” then “Swamp Thing” and it says “issue 21, issue 22, issue 23, etc” but does not have 1-20, is that okay? Is that where it starts or are there issues missing?

I notice this when I go for other things to and it will have “Issue 23, issue 41, issue 39” so it’s all over the place. Do I just read straight through them in the order they appear? I am confused and so noob.

Thank you in advance, for any help.

Also, I’m on Android of that helps.

This is what I see for Storyline: Invasion 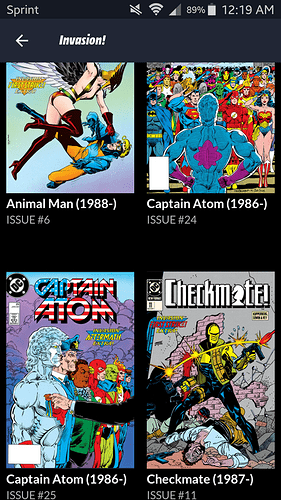 I am just as much of a noob, but from what I can tell, the storyline takes place over different series’ that are numbered differently. It would be like if Batman did a crossover with Batgirl and they switch between the two runs to tell the complete story, but Batman was on its 60th issue, and Batgirl was on its 20th. The collection that you’ve shown is a singular narrative that takes place over different titles that are numbered differently. In other words, read the comics in the order they give you if you want just that narrative.

For Swamp Thing, for all purposes #21 is considered the first issue.
#20 is worth reading if you see it, but it just ties up loose ends from the previous writer.
You will not miss anything, starting with #21. That’s where Alan Moore comes along and revamps Swamp Thing into a whole new character.

For Invasion…
Here’s the reading order.
Don’t be confused by the numbers. Those are the numbers for the individual titles, not the event, itself.