How much, if at all, did the controversy over last year’s first-round JLQ vs. Robins matchup affect how this year’s Round Robin matchups were set?

KK: We actually populate the competition bracket randomly, using a number generator. One of the great things about this competition is the passion it incites in our fans—we love these stories and characters, and it’s fun to see how excited you guys get about these stories too—and we try to give every concept a fair shot, and let the fans pick the ones that go forward. That said, we’re always looking for ways to keep these stories moving forward, like JLQ’s appearance in Tis the Season to Be Freezin’!

This question has always been something I’ve wanted to ask, when making the comics would you prioritize the animation or the script itself. Would you prefer A comic with not so good artwork but with an amazing script or vice versa. Ps Michael Mcalister is the goat

To all of you, besides the series you suggested, who would you want to win?

MMc - Well, the easiest answer is that I don’t want Andrew to win! He beat me last year, so naturally, I want Ben to win. But honestly, I would have loved to have seen Captain Carrot and his Best Friend Darkseid win. After reading the pitch and seeing the art by Peter Nguyen, I really wanted to see that story come to life! That being said, I had high hopes for Hawkman & Hawkwoman: The Changeling!

AM: Other people had pitches? Sorry, I only focus on my pitches since they’re all clearly the best. Haha, kidding of course. I love Earth-26 and Captain Carrot (check out the classic Dog Days of Summer for a story I even wrote featuring Captain Carrot!) so I really would’ve loved to see Captain Carrot and his Best Friend Darkseid go the distance!

KK: OH MAN, well, as someone who was kicked out early BOTH YEARS, it’s going to be very difficult to root for ANY of Andrew’s pitches…especially since I desperately want him to be dethroned as the winner. HOWEVER, of all the pitches, I was really excited about the Green Lantern: The Birth of Conspiracy because i LOVE the whole concept of 1950s Men in black, and Alan Scott doesn’t get ENOUGH love as a Green Lantern…but as it was going up against a few of my books, I had to vote for my own. I also really love the art for the Superboy title – Jahnoy Lindsay’s work is so amazing, I could look at it all day. But Fico Ossio would have KILLED on that Hawkman book…it was a really tough year this year.

BM: I’m honestly not sure who I would want to win out of all the other pitches, but, Justice League (Redacted) was one that really caught my attention. It had one of the most intriguing titles I’d heard in a long time and it really excited me. And the Hawkman & Hawkwoman: The Changeling art blew me right out of my seat.

I really loved the art last year, but it feels like everyone’s REALLY stepped it up with the covers and one pagers so far!

Hi editors, thanks for being here! How do the stories for the round robin get picked? Do you send out a request for pitches, and you guys narrow down what you think are the best ones?

AM: Personally, I put together a list of characters and story ideas that I’ve always wanted to see or make. I then go out to talent I’ve enjoyed working with or would like to work with and pitch them one of the ideas I think they’d be great on, but I also tell them to pitch me a character or story they’ve always wanted to tell. Then we sit down and go over both of our lists together and pick what we think would be the most fun to do. It’s been an extremely creatively fulfilling process honestly.

BM: I had a few initial concepts of stories I’d like to see, but mainly I had writers and artists I really wanted to work with. So, when I reached out to the different writers initially, I threw a few possible concepts their way, and only one of my concepts ended up being one we went with, and the others were generated by the writers entirely. I basically went to them and said, “In a perfect world, what stories would you like to tell?” and got back several different ideas/loglines to choose from. Nearly every idea I received was excellent, so choosing the right ones for Round Robin was a real challenge. Being able to tell creators I respect to untether themselves creatively and just dream up stories was an absolute joy.

KK: It varies, honestly, for all for of us – sometimes it’s pitches we’ve had in the can that we weren’t sure how to advance (but we KNEW were killer ideas) or sometimes it’s just me reaching out to a writer I really have wanted to work with for a while. Then we get on the phone and chat - here is what Round Robin is, would you like to be a part of it? Is this pitch you gave me the one you want to use/the best one we’ve got? Or what ideas do you have that you’re incredibly in love with that we want to have be a part of this? What artist would work best for this idea? and then we go from there! But, like all DC comics, it starts with “what is the absolute best comic book story we could tell”.

MMc: The process was a little different for me on each pitch. I knew that I had four writers that I wanted to work with. For Hawkman & Hawkwoman, I had been working with Cavan Scott on a few other projects and I knew of his love for the Hawks. That was an easy pairing. I chose Black Canary because I knew that it was her 75th Anniversary and I really wanted to do something to celebrate her. It’s really just an adventure sitting down with creators to talk about potential new projects. Seeing their passion for the characters just energizes me!

Is there anything brewing for the promising ideas that didn’t make it, or are they lost forever? Thanks!

AM: Nothing’s really lost forever! I’m so excited to announce that writer Josh Trujillo and artist Adrián Gutierréz are coming back together to tell their Jaime Reyes Blue Beetle story, Blue Beetle: Graduation Day from last year’s Round Robin! Check out this amazing cover, drawn by Adrián and colored by Wil Quintana. I couldn’t be more thrilled to edit this story, it’s been a long time dream of mine. Make sure to keep an eye out for more Blue Beetle news coming soon too! 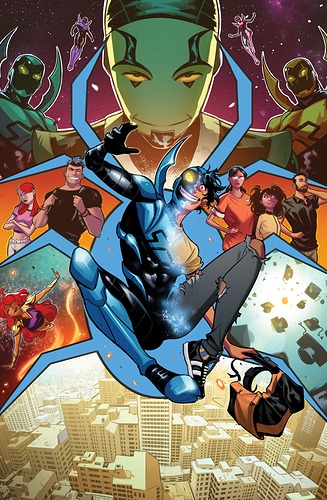 KK: We’re also happy to share that, although they didn’t move forward to Round Three, you’ll still get to see more Hawkman & Hawkwoman: The Changeling, Kid Flash: The Speed of Fear, Ghost Tour from Hell, and Green Lantern: Birth of a Conspiracy as six page short stories in DC Round Robin 2022–WITH MORE NEWS TO COME! 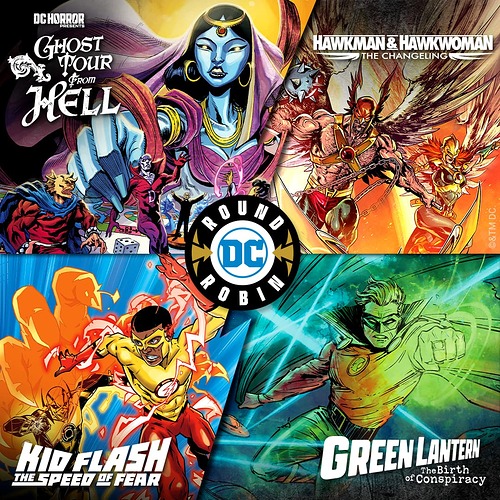 This question has always been something I’ve wanted to ask, when making the comics would you prioritize the animation or the script itself. Would you prefer A comic with not so good artwork but with an amazing script or vice versa. Ps Michael Mcalister is the goat

BM: Firstly, Michael is absolutely the GOAT. Agreed. Secondly, I have a hard time with the question, because I’m not certain there is such a thing as “bad art,” y’know? In comics, if the art tells the story, and it communicates ideas successfully, it’s good comic art, in my humble opinion. Does every style work for every genre in comics? No, of course not, but if you look at something like Maus, for instance, that’s a book that, if it was in a superhero book, I think it would not be appreciated. But, in the context of Maus–for the story it’s telling there–it’s perfect. So it’s all subjective, of course. Except Michael being the GOAT. That’s not subjective. That’s just a fact (it is now, at least, since I’m no longer going up against any of his books).

AM: Thanks so much for your questions and spending the time chatting with us. Looking forward to my repeat victory this year!

MMc - Thanks for joining us for this Q&A today. Really love seeing everyone’s passion for the Round Robin projects. Keep it up, folks! Never stop telling us what you want to see DC Publish. More importantly, go out and buy the books!

BM: This was really fun! Thanks so much to everyone who took the time to ask some questions! As my parting words, all I have to say is this: Andrew won last year. It’s gonna be me versus him this year. You don’t want Andrew to get a big head, do ya? GOOD, me neither! Vote for Suicide Squad: Dark and Constantine & The Demon: Vacation From Hell!

KK: Thank you guys for joining us here today! We love chatting with you guys about these stories and characters. Even though my pitches didn’t go forward.

This is so cool. I’m so happy we’re getting to see some of the other titles as well as the winners. So many of these stories need to be told.

THIS IS HUGE!! Thank you so much for sharing!

although they didn’t move forward to Round Three, you’ll still get to see more Hawkman & Hawkwoman: The Changeling, Kid Flash: The Speed of Fear, Ghost Tour from Hell, and Green Lantern: Birth of a Conspiracy as six page short stories in DC Round Robin 2022–WITH MORE NEWS TO COME!

So happy to hear this. Love it!! MOAR MOAR MOAR PLEASE!

How much do you talk with writers about continuity with other books to make sure that events are cohesive and in order by release? How hard is that when book release dates get adjusted?

Hello Editors,
I’m probably not going to get my question answer, ever since I was a kid reading DC Comics, what do Editors do when making a comic, & are they like a director in movies or shows?
Thankyou for your time.

But honestly, I would have loved to have seen Captain Carrot and his Best Friend Darkseid win

I said the same thing!!!

check out the classic Dog Days of Summer for a story I even wrote featuring Captain Carrot!

I just got a copy yesterday!

Alan Scott doesn’t get ENOUGH love as a Green Lantern

Alan Scott is one of my favorites!

Hawkman & Hawkwoman: The Changeling art blew me right out of my seat.

My friend stole my laptop when he saw the art, and ran away with it… (and gave it back eventually). He loved the art so much!

Will we be getting a Robin Team up Comics Storyline where Robin has to team up with Superboy, Supergirl, Batgirl, Spoiler, Orphan, Arrowette, Black Canary, Green Arrow, Arsenal, Green Lantern Jessica Cruz, Power Girl, and also Batwoman Kate Kane to take on a far bigger threat than he can handle on his own in the current DC Comics Run for Robin’s character in the Comics? 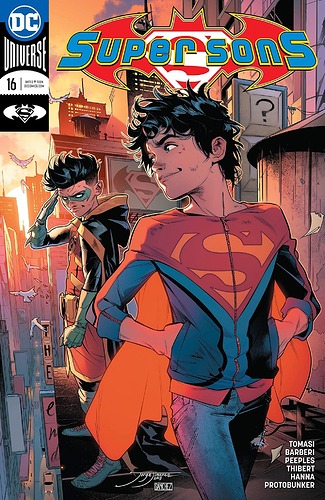 Not sure if its too late for a question, but figured I would try:

DC is no stranger to releasing mini-series, especially nowadays where they feel rampant.

Why are certain ones singled out in need of winning a popularity contest before they see light of day while others aren’t?

Also, to piggyback off the popularity - do you feel certain books will have an edge based on the popularity of the characters within the proposed series?

This is awesome! Thank you so much for doing this!

Thank you so much for answering my question!