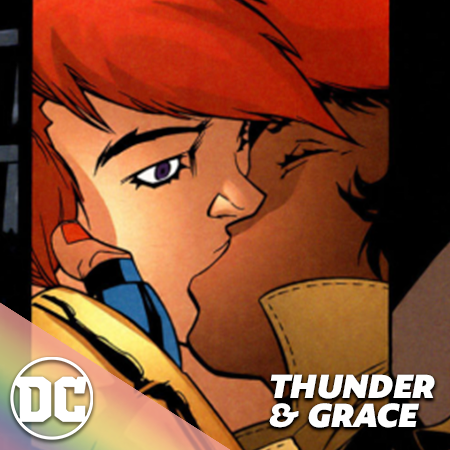 Pride Profile: Thunder and Grace. Maybe it’s a case of opposites attracting, but if you were reading The Outsiders in 2003, you may have seen this coming. Anissa Pierce is something of a professional hero, following in her father’s footsteps and treating the family business of helping and protecting people seriously. Thunder’s ability to alter her density provides a level of super strength and invulnerability, plus her medical training made her an effective member of the team. While Anissa came from a stable, loving family, Grace Choi bounced from one foster home to another, before ending up on the street where her half-Amazon physiology finally kicked in. Grace used her new strength as a bouncer and fighter before being recruited by Red Arrow to join the Outsiders.

Thunder and Grace’s different attitudes toward being a superhero generated tensions at first, but as they grew to respect one another, they also grew to love one another. Together with the Outsiders, they took on threats ranging from child human trafficking, military dictatorships to an invasion of Amazons.

Anissa would go on to star in Black Lightning on the CW as a superhero with the heart of an activist. A slightly altered version of Grace Choi also appears in the show, where once again Anissa and Grace fall in love.

More from the Arrowverse

[8 - Grace] As a shapeshifter who was on the run for years, Grace Choi is accustomed to hiding her true self and putting up walls just to get by. But after being alone for so long, she’s been able to find a new home in Freeland and a new family in her wife and the rest of the Pierces. Born Shay Li Wylde, Grace has had her powers for nearly her entire life, but that didn’t make her tragic origin any easier. Not only did her birth parents abandon her soon after she was born, but she was taken ca…

Thunder comes alive in the Arrowverse

Check out the shared Pride profile for Anissa and Grace in the comics as well!