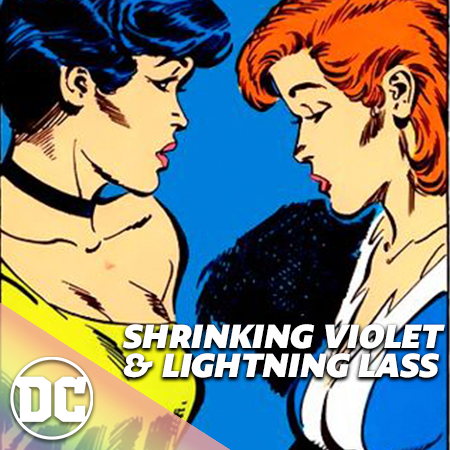 Pride Profile: Shrinking Violet and Lightning Lass. Vi and Lightning Lass are a prime example of a time in comics when two women could be a couple, without being officially coupled. Salu ‘Vi’ Digby, a Jerry Siegel and Jim Mooney creation, dates from 1961’s Action Comics #276, while Ayla Ranzz, the twin sister of Lightning Lad, came along in ’63 thanks to Edmond Hamilton and John Forte. Both spent years as part of the Legion family saving the universe, falling in love with one of the guys, and going through traumatic personal events. By the mid-1980s, this shared history of trauma brought them closer in books first written by Paul Levitz. Through different series and multiple writers, the pair were often drawn in close physical contact, confiding in one another, and professing their admiration and affection. But, an unseen line was never crossed, there’s no confession of love, no kiss, no true romantic moment. And yet, most of their writers and many of their fans considered Vi and Ayla to be a loving couple.

Glad someone else remembered this one. Yes, you had to read between the lines, but the lines were drawn very far apart!

Hey @folenzo.26662 glad to hear from you. This is a great example too, because the writers admit that’s what they were doing. Man, I love history.

Welcome back to the community, @folenzo.26662! It’s very interesting to look back at comics like these and this pair was a great combination.

The neat thing about this coupling is that while their strongest moments happen around the “Five Years Later” era that was erased when the original Legion came back into continuity, that coupling was the one thing that stayed. While again there weren’t anything that officially said they were a couple during the Retroboot era, they did frequently hold hands, went on vacations together, lived together and shared a bed, so…