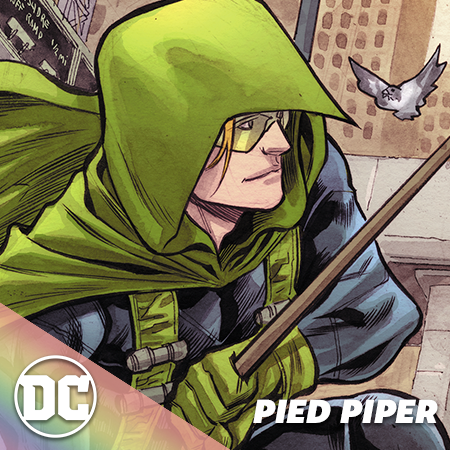 Pride Profile: Pied Piper. Hartley Rathaway is an original Silver Age Flash villian created by John Broome and Carmine Infantino for The Flash #106 in 1959, also the debut issue for Gorilla Grodd. Mastering his flute like his namesake, Rathaway uses his power to control people, commit crimes and generally act like a Rouge. Reimagined with the New 52, the Pied Piper becomes a much more complex and interesting character. Now a reformed Rouge, Piper assists the Flash while dating his Central City PD boss, David Singh, at the same time.

Need more Pride Profile action, check out these club discussions from across the DCUI.

Welcome to The Psychology Of Supervillians Club. This month’s Supervillain [The Pied Piper] WARNING : This club will be discussing darker aspects and elements within the DC Universe. These aspects and elements could be viewed as overtly violent, malevolent and possibly offensive to some. We acknowledge that we are not mental health professionals, and are not able to provide any diagnosis or guidance in this regard. This thread does not suggest or support any mental health diagnosis or any gu…

I liked Hartley in Wally’s run too. He was a reformed Rogue there too, and he’d hang out with Wally and Linda as friends as well as help Flash occassionally. The friendship side stood out to me though.

I liked that too, really should have included a reference to that. Piper makes the perfect reformed Rogue